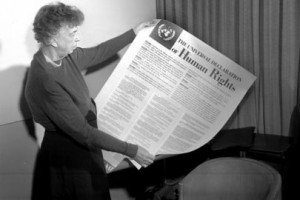 When the declaration was first authored, it was milestone in human history and was considered by many as the culminating document of the various rights movements that preceded it in the 17th (British Bill of Rights 1689) and 18th centuries (American and French Revolutions). Unlike those movements however, which were largely nationally based, the UDHR was meant to be universal and set out to place in writing the basic human rights of the entire human race.

The document itself contains 30 different Articles, each describing a basic human right and each inspired by the “recognition of the inherent dignity and of the equal and inalienable rights of all members of the human family is the foundation of freedom, justice and peace in the world”.

Since its creation, the document has become more than a mere announcement and affirmation of the human rights of the world. It now exists as one of the main international instruments in an ever expanding international system of laws and norms that no longer allow the sovereign state to hide from international intervention and scrutiny.

Though it would be impossible to deny that the declaration is a necessary bulwark in the defense of the human person and his inherent dignity internationally, it is also important to point out that it has been purposefully misinterpreted or ignored in ways that threaten human dignity as well.

For example Article 3, which states that “Everyone has the right to life, liberty and security of person” is often paradoxically interpreted to encourage a right to abortion just as it was in a recent report authored by Special Rapporteur Anand Grover and that we have covered on this blog previously. How is this possible? It is possible because while these rights were once considered to be clearly defined and accepted international norms, they are now being reinterpreted and redefined by men like Grover and organizations like the Center for Reproductive Rights which would rather see their own interests affirmed than affirm the universal truth of the document’s original intent. Their strategy is not unlike the strategy used by the gay rights lobby in the national and international marriage debate. In that debate, like minds continue to attempt to redefine an institution that previously never needed to be defined at all.

As we celebrate the 63rd anniversary of the the Universal Declaration of the Human Rights, we must remain aware of the attempt of a small few to manipulate the available thrones of power to their own advantage in order to define reality in a way that suits their own interests. A human right like the right to life is not something created or arbitrarily defined, but rather something recognized and affirmed first in lived experience and then by the law. The moment people begin to define such rights outside of the human experience with reality is the moment that something as obvious as the right to life can be reinterpreted as a right to murder.

Here you will find a nice photolog documenting the UDHR’s creation in 1948.