Trending Now
You are at:Home»Featured»Up in Smoke
By Tom Purcell on November 15, 2014 Featured, Government & Politics, Humor 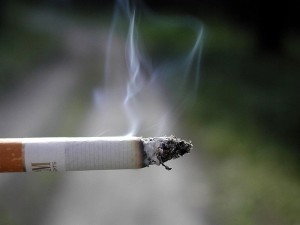 I admit it: I feel sorry for cigarette and cigar smokers these days. But changing fashions and the results of the recent election may offer them hope.

Cigarette smoking used to be fashionable. Actors like Steve McQueen and Sean Connery made it look manly and cool in their many movies.

Women who smoked used to be considered sexy, too. No sooner did they pull a Virginia Slim out of their cigarette case than men everywhere would rush toward them with lighters.

But somewhere along the way, smoking became vile and ugly. Americans began hating it the way they once hated communism and polio. The government sued cigarette makers for misleading the public about the addictive nature of nicotine and billions in punitive tax revenues are now pouring into public treasuries. Smoking has been banned in public places in many states.

And so it is that cigarette smokers are shunned at family gatherings and sent to the garage or the street, so as not to stink up the house. Even executives at the highest level of corporate America are sent down the elevator to the basement or courtyard, where they mingle with other smokers like some kind of pigeons while passersby snarl at them in disgust.

It’s not much better for cigar smokers.

I smoke 15 or 20 stogies in a good year. Why? I don’t know. Maybe it’s the manly feeling I get when I see my breath billow out of me like a chimney. Or maybe I want to be in the company of legendary cigar smokers like Mark Twain and Winston Churchill. And there’s something calming about taking a slow, deep drag on a stogie. It’s like male yoga — for males who would never do yoga.

Sure, there are health risks to those who smoke cigars on a daily basis. Such smokers are more prone to cancer of the mouth and other maladies — and fully aware of the risk.

All I know is that it is dang relaxing and it promotes some very enjoyable conversations with friends and strangers at my favorite cigar bar, the Leaf & Bean in Pittsburgh’s Strip District.

But the federal government is going after cigars now, too. President Obama’s Food and Drug Administration proposed sweeping regulations last spring that would affect the availability, accessibility and cost of my favorite cigars.

As stated in the Federal Register, the FDA believes that “asserting our authority over these tobacco products will enable us to take further regulatory action in the future as appropriate.”

Well, if the recent elections are any indication, I think the future suddenly is looking good for smokers — marijuana smokers.

Referendum initiatives legalizing recreational marijuana just passed in Alaska, Oregon and the District of Columbia — even though inhaling weed is much harder on one’s lungs than inhaling cigarettes and far riskier than puffing on a cigar without inhaling at all.

In any event, the trends are looking good for marijuana legalization. Whether you agree or disagree with the trends, legal weed smoking is the hot fashion of the day.

So if you like to sit back and enjoy smoking dried leaves without the government butting in and telling you what you can and cannot do, maybe it’s time to give up unfashionable vices — cigarettes and cigars — and prepare to make the switch to a vice that is highly fashionable, marijuana.

And if you don’t like such government hypocrisy, too bad. You’re just going to have to put it in your pipe and smoke it.