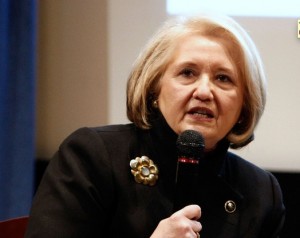 Last Thursday, a State Department press release announced the delegation they would be sending to the the 56th Session of the UN Commission on the Status of Women beginning this week at UN headquarters in New York and running two weeks.

The two co-leaders of the delegation are Susan Rice, US Ambassador to the United Nations and Melanne Verveer, Ambassador-at-Large for Global Women’s Issues. Verveer, a former  White House staffer to Hillary Clinton and staunch abortion rights advocate, was appointed to this post after President Obama created it in March 2009. Pro-life leaders believe the department was created in large part to advance abortion rights globally.

In 2009 UN Ambassador Susan Rice went on record (although without using the word abortion) in a speech at Howard University signaling a substantive policy shift from the Bush Administration on abortion by equating abortion with “reproductive health.”  C-FAM reported on this.

Delegates chosen to accompany the co-leaders include the following:

Since taking office, the Obama administration has almost doubled the amount of foreign aid to developing countries for population control and reproductive health. The FY’ 2013 budget calls for $643 million. Due to the Mexico City policy being lifted this money flows to international groups that perform abortions and lobby for unrestricted abortion. Pro-abortion international groups exploit maternal mortality statistics in developing countries to push for policy change and saturate countries with contraception and access to abortion.

Secretary Hillary Clinton has been lauded by abortion rights groups for elevating the status of girls and women around the globe through new state department initiatives. Unfortunately, this “empowerment” is always through a population control/reproductive health lens.  How many more unused “emergency kits” containing condoms and birth control pills must we send to countries only to be shelved.

The UN Convention on the Status of Women should be addressing the real help that marginalized girls and women need; access to education, health care and economic assistance and not use this valuable time to advance a pro-abortion agenda. Let’s hope this is the focus at the UN this week.