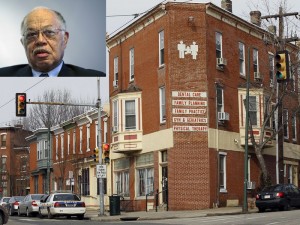 Somewhere toward the end of “A Few Good Men” comes the only scene from the movie that anyone actually remembers. It’s the one where Jack Nicholson in a uniform begins chewing the scenery and turns a dreary Aaron Sorkin adaptation of an Aaron Sorkin play into a memorable movie while inflicting Sorkin on the entertainment industry for the next two decades.

The familiar thesis of  Nicholson’s Colonel Jessup is that he does what needs to be done and what no one wants to talk about needing to be done. His existence may be “grotesque and incomprehensible to you”, but he does the ugly things that make it possible for everyone to go about their day.

The speech is an extended wordy distillation of a familiar quote that was variously attributed to Churchill or Orwell. “People sleep peaceably in their beds at night only because rough men stand ready to do violence on their behalf.”

In the urban battlefield of Philly, one of those rough men doing violence on behalf of liberal ideas was a  Thomas Jefferson University grad by the name of Kermit Gosnell. Gosnell was one of those unsung heroes doing the dirty work that allowed the activists putting on another round of the Vagina Monologues sleep safely in their beds at night.

Most supporters of military intervention don’t like looking at photos of dead children after a bombing raid. They will contend that they are a fact, but not the point. Gosnell’s butcher shop is similarly a fact, rather than the point. Pro-choice activists will argue that it is not representative of abortion clinics. And it isn’t.

It is representative of what abortion looks like once you cut through the upper layer of the medical services provided to Sarah Lawrence grads and down to the street level of the lower strata that don’t visit abortion clinics to assert their reproductive empowerment, but because the family unit is broken and they are trying to escape the same cycle of broken families that they can never leave behind.

Margaret Sanger got her start setting up shop in Jewish and Italian neighborhoods because those were the two groups that the upper strata of the day thought were having too many children. Back then it was supposed to be about wives overburdened with too many children. Now it’s about families that never existed where the abortions don’t happen at the clinic, those are just the final expressions of a larger societal abortion that took place when the family died.

The family isn’t dead everywhere. It’s more likely to be dead in the places that men like Gosnell do business than the places where the policymakers and the non-profits who dress up destruction as empowerment do business.

Most arsonists don’t set their own houses on fire. Most liberal policies don’t affect liberals. And that’s true in the family sphere where the liberals in the top 1 percent are more likely to have a stable marriage than the bottom 1 percent bleeding in Gosnell’s house of reproductive freedom because their dead baby does not have and will not have a father.

Dr. Kermit Gosnell was doing the dirty work of the liberal state by cleaning up some of the mess. It was bloody and murderous work, but it was made necessary by the sort of people who talk about reproductive freedom while little realizing how little freedom the women who bled, and sometimes died, in Gosnell’s offices really had.

The issue isn’t as simple as Pro-Choice. Abortion is just the conclusion of the sordid package of social liberalism. The package begins with sex ed, complete with the obligatory LGBT mentions, runs through national STD infestations, hookup culture, single parenthood and packs of young men and women recreating the mistakes of the parents they never had and then flushing those mistakes down the toilet before settling down with three kids, by different fathers who are never around, and a package of subsidies from the welfare state administered by social workers who have seen it all.

It’s not the story for everyone, but for many of the women who found and find their way to places like Gosnell’s butcher shop, that is their story. It’s not a story about abortion. It’s a story about what happens when you replace the family with free love that turns out to be neither free nor love. Like teaching first graders sex ed or handing out condoms on the street, abortion is one of the ways that the liberal state tries to limit the fallout from its destruction of the family.

The fallout is ugly and bloody. You can see it in the packs of angry teenage flash mobs smashing through stores. You can see it in the food stamp cards that mothers tote like coupons, the teen domestic abuse hotline posters hanging around neighborhoods “If he respects you, he won’t beat you” and the other posters of frightened pregnant teenagers holding their stomachs and whispering, “I don’t want to lose my dream.”

The end of that long brutal journey through black eyes, plans for a GED and medical tests at the clinic is one of Dr. Gosnell’s slabs. The men and women who made Kermit Gosnell’s business boom don’t want to look at him. Why would they?  How many people wanted to look at William Calley? They are satisfied knowing that somewhere rough men in latex gloves are doing violence of the world they made. The world they unmade.

They are beginning to claim Gosnell’s story already and remake it into another drama about the lack of access. More money must be given to Planned Parenthood so that no Dr. Gosnell’s happen again. Reform and accountability are key. More money must go to groups that promote the lifestyles that lead to abortion and then dispense abortions so that the whole cycle can continue to expand. The babies have to be destroyed to save the next generation of babies from being punished with babies.

But the Gosnells aren’t going anywhere. They are everywhere. Sometimes they’re Middle Eastern. Other times they’re Chinese or Pakistani. Their medical skills are poor, but it’s not because they’re stupid, it’s because they don’t care. They set up shop in poor neighborhoods. The philosophy is fast food. In and out. Maximize patients. Maximize cash. The treatment is sloppy but so are the patients and no one cares because there is a separate waiting room for the white patients.

Often they work the Medicaid/Medicare angle where they defraud the government, ordering endless tests from clinics they have relationships with while offering the lowest standard of care possible. And some cash in on the abortion business. Patients aren’t people to them. They’re wallets or insurance cards with
eyes, teeth, bones, genitalia, muscles and any other parts that they can
bill for.

It’s easy to take a whack at them, but vultures only gather where there is carrion. The Gosnells are vultures. They will eat what they can, gorge themselves on bloody meat and then waddle in the sun. But they didn’t make this world where family is becoming an alien concept and a child is an alien fetal parasite. They are just cashing in on it.

Kermit Gosnell is the future. And the future in places like this is ugly and grim. It’s broken families living on social welfare creating more broken families. It’s dead children whose murder churches and synagogues are forced to pay for. It’s living children who grow up hoping to be able to kill. It’s feral packs of lost boys who will never be men and the girls who suddenly become women reading an ad and taking a bus down to 3801 Lancaster Avenue because they’re lonely and afraid and they’re afraid of losing their dreams, even if they don’t know what they are anymore.

This is the world that liberalism made. It is small, mean and ugly. Call it Sex Positive Education or Reproductive Freedom or any other euphemism and out of sight of the specialized study sessions at overpriced colleges, it still ends with mothers towing screaming children down the street, going to church on Sundays even though they don’t believe and there are hardly any younger men there and others mothers becoming girls again at Dr. Gosnell’s hands.

Kermit Gosnell will be locked up. There will be a brief spurt of inspections. And then things will go on as before and the empowerment educators who wear “I Had an Abortion” t-shirts while they drive to the soccer games of their children in some placid suburb will sleep well at night knowing that somewhere in Philly, NYC and LA there are rough men doing violence to the wombs of desperate women and the lives of their unborn children on behalf of their ideologies and policies. Rough men in dark places doing he inevitable dirty work in the world they made.