Trending Now
You are at:Home»Featured»Virtue Is Its Own Reward
By G. Tracy Mehan, III on July 12, 2011 Featured, Government & Politics

During the dark days of Republican profligacy, when earmarks were the rule and GOP House and Senate members routinely voted for massive discretionary spending bills (many loaded with pork and earmarks) there was one man who bucked the tide of red ink: Rep. Jeff Flake (R-Arizona).

“I believed the earmarks game was robbing us as Republicans of our identity as fiscal conservatives,” said Flake.

Indeed, Flake was even willing to challenge earmarks of the highest-ranking Republicans, including then- House Speaker J. Dennis Hastert (IL), who lost his job when the GOP was decimated in the 2006 elections for many things, including earmarks and spending, not to mention two seemingly-endless wars. 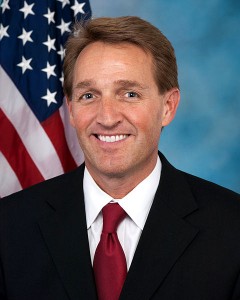 Flake routinely tried to kill indefensible earmarks for such unworthy projects as the National Cowgirl Hall of Fame or a museum dedicated to teapots. For this, he was punished severely by the powers that be, i.e., his fellow Republicans.

Jeff Flake’s story is told with sympathy by Michael Leahy in his recent article in The Washington Post (“House earmarks gadfly is case study in survival,” July 11, 2011).

While noting the fall from political grace by John Edwards, Anthony Weiner and John Ensign for personal and moral failings, Leahy claims these episodes “tend to obscure the quiet stories of unlikely political comebacks in Washington, those devoid of titillation.”

“Jeff Flake’s story serves as a reminder that Washington is rife with second acts,” he reports.

Leahy describes how Flake was “pummeled and left for dead” by GOP colleagues due to his sustained criticism of pork-barrel spending. Indeed, even current House Speaker John Boehner, who has not dabbled in earmarking during his long career, was party to the Arizona congressman’s public humiliation, which started when Jeff Flake was stripped of his seat on the prestigious House Judiciary Committee in 2006 — dashing his hopes of becoming committee chairman.

“I thought I might be the [committee]chairman someday,” Flake recalled. “And then I was suddenly off after Boehner talked to me…Of course it was hard…But you have to keep going.”

Evidently, Flake had supported some earmarks for Arizona defense-related projects. “I had signed 11 letters with the delegation for defense [projects]in our state,” he confessed. “At the time I’d signed them, I guess I said to myself, ‘Well, this is defense. This is different.’…It really wasn’t in many ways.”

After being criticized in 2003 for this apparent inconsistency in his record, Congressman Flake said he would not ask for any more earmarks. He kept on fighting the practice going forward. By 2006 he was “irking” earmark sponsors by inviting them to stand in the House chamber during spending debates and explain the need for their measure.

Flake’s colleagues basically had enough when, just two days before the 2006 midterm elections, he appeared on 60 Minutes to blast earmarking by both parties. After the Republicans took a beating, and Hastert lost his Speaker’s job, he lost his job on the Judiciary Committee for what Flake describes as “bad behavior.”

Leahy reports that Flake’s account is neither confirmed nor disputed by Mr. Boehner’s office.

Whatever one thinks of Jeff Flake’s actions, he took his punishment like a man. Again, Leahy tells the story:

“The moment might have forever ruptured the two men’s working relationship, but Flake did not publicly express bitterness.  He maintained contact with Boehner, occasionally asking the leader about the possibility of landing a seat on the Appropriations Committee, where, Flake argued, he would be the rare member aggressively pushing for cuts.”

“The request ‘was kind of laughed at,’ Flake recalls.”

Fortunately for Flake, the political winds not only shifted, but did so with gale force.  Now earmarkers, both Democratic and Republican, do everything within their power to avoid having the scarlet “E” affixed to their chests. The worm, as they say, has turned.  Flake now speaks for a vibrant and growing constituency in the GOP and the nation.

At 48, Flake now has his seat on the Appropriations Committee and a shot at an open Senate seat in Arizona for which he has already announced he is running.  He remains philosophic in regard to his political journey. “You have your best chance around here if you don’t complain and if you keep working,” said the aspiring Senator. “It helps to know you’re going to have some tough days here.”