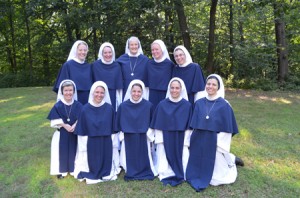 This week (November 2 – 8) is Vocations Awareness Week. Since I began my full-time work with Priests for Life over 20 years ago, one of the first things I became aware of was that many young people today are finding their vocation precisely because of the Church’s witness to the sanctity of life amidst the holocaust of abortion.

Vocations are all about life, and life is all about vocation. The mystery of a vocation, is rooted in the same foundation as the Church’s fundamental commitment to proclaim, celebrate, and serve the Gospel of Life. As a result, every person in every vocation is called to an uncompromising witness on behalf of the sanctity of life.

The first and fundamental aspect of our vocation, in fact, is the call to be. God did not have to take us across the chasm between non-existence and life, and certainly there was nothing we could have done to bring ourselves into being. Each of us was conceived and born not as the result of chance or of merely human decision, but as the result of a God who knew us and called us into life.

We see several powerful Scriptural references that link God’s creative action to the theme of vocation.  Paul tells the Ephesians that our call to faith predates creation:

4 For he chose us in him before the creation of the world to be holy and blameless in his sight. (Ephesians 1:3-5)

Not only is the gift of life itself the first manifestation of our vocation, but the very fact that we are called is at the heart of why life is sacred. Human beings, in other words, are capable of being called precisely because they are capable of a relationship with the Creator which surpasses the relationship that other elements of creation have.

God does not just make us; rather, he enables us to know him, to enter into a covenant with him, to love him, and ultimately to share his Divine nature and see him face to face.

To Give and Receive Love

This theme of the connection between vocation and life becomes even clearer when we recognize that, as Mother Teresa said, the very purpose of life is to give and receive love, and as John Pau l II wrote in Evangelium Vitae, “Jesus proclaims that life finds its centre, its meaning and its fulfillment when it is given up (EV 51). Every vocation is life-giving. The call to be fruitful is evidenced in marriage and its crowning fruit, the gift of children.

This is why a priest is called “Father.” He raises a spiritual family. This is also why religious consecration bears so many of the expressions of a marriage. One’s consecration becomes a source of spiritual life for all within the Church.

Ironically, the very words by which Jesus teaches the meaning of life and of love – and hence of every vocation – are also words used by the culture of death to justify the taking of life: “This is my body.”

“This is my body, I can do what I want, even if it means killing the baby inside of me,” some will assert. “This is my body, given up for you,” Jesus asserts, and thereby gives us the formula both for fidelity to our vocation and for building the culture of life. We give ourselves away, to God and to one another: spouse to spouse, parents to children, priest to his congregation, consecrated religious to those whom he or she serves.

The Signs of the Times

A vocation, though given from eternity, takes shape and is lived out in a specific time and place. The context of history, and the concrete needs of the society in which we live, illumine what God wants us to do. The specific form of service that priests and religious give is marked by the signs of the times. Hence, the Church established schools and hospitals in response to the needs of children and of the sick; communities arose to rescue slaves or to combat specific heresies, because historical circumstances spoke to the Church and manifested the voice of Christ in the voice of those who were in need.

So it is today. Marking our times is an unprecedented war against life. Never has the gift of life itself been under such direct attack as by the widespread legalization and practice of abortion, which takes more life than any crime, disease, war, act of terrorism, or any kind of injustice or violence.

In the United States alone, over 3300 children a day are killed by this procedure. All but a small fraction of them are healthy babies carried by healthy mothers, and this includes mothers in their seventh, eighth, and ninth months of pregnancy.

The Most Radical Denial of the Gospel

The assertion that these lives can be taken by the “choice” of the mother, and that governments can legitimize such a choice, is both a fundamental threat to civilization itself, and the most radical denial of the Gospel in our day. John Paul II states in Evangelium Vitae, “As the Council reminds us, ‘by his Incarnation the Son of God has united himself in some fashion with every person’ .It is precisely in the “flesh” of every person that Christ continues to reveal himself and to enter into fellowship with us, so that rejection of human life, in whatever form that rejection takes, is really a rejection of Christ” (EV 104). He also asserts that when abortion is legitimized by the State,” the disintegration of the State itself has already begun” (EV 20).

Because “the Gospel of God’s love for man, the Gospel of the dignity of the person and the Gospel of life are a single and indivisible Gospel” (EV 2), and because our common call to witness to the Gospel is shaped by the needs of the times, it is integral to every vocation to bear witness and give voice to the right to life of our most vulnerable brothers and sisters, those still in the first nine months of life. These, indeed, are the poorest of the poor, and the Church’s fundamental option for the poor therefore makes their needs a priority. Indeed, no segment of the human family has less protection than the unborn.

This proclamation is at the heart of every vocation, because it is precisely about the dominion of God. The culture of death proclaims that we belong to ourselves. What matters is “my choice.” The Gospel – and therefore we who proclaim it – declare that we belong to God, and that in conforming our choices to him, we find true freedom.

We are the People of Life, called to build the Culture of Life. In doing so, we are not simply working for victory; we are working from victory. Christ is our Life, and he is risen from the dead! The forces of death have already been conquered. Now it is up to us to announce and apply that victory to every segment of our world. At the heart of every vocation is the call to proclaim, celebrate, and serve the Gospel of Life!