Trending Now
You are at:Home»Featured»Waiting on God
By Patrice Fagnant-MacArthur on June 21, 2011 Featured, Live in Christ 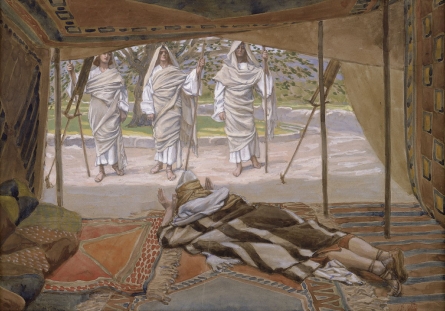 The first readings for the daily liturgies this week tell the story of Abram and his family. On Monday, God promises that Abram’s descendents will inherit the land he has brought him to. He was seventy-five years old at this point.  Tuesday, God makes the promise again.” I will make your descendants like the dust of the earth; if anyone could count the dust of the earth, your descendants too might be counted.” (Gen 13:16) Wednesday, Abram is getting impatient. “O Lord God, what good will your gifts be, if I keep on being childless and have as my heir the steward of my house, Eliezer?” (Gen 15:2) Yet, he continued to trust in the Lord’s promise.  By Thursday, his wife has had enough.

Abram and Sarai have been living in Canaan for ten years at this point. Abram is in his mid-eighties and Sarai is an old woman – far too old to be having children. She believes in God, but she is also realistic. She can’t bear any children, but Abram is supposed to have some. She comes to the reasonable conclusion that some intervention was in order. So, she gives her husband her maidservant Hagar as a concubine. It is important to note that this was considered perfectly acceptable at the time – Sarai broke no moral code. As a result of their union, Hagar conceives and ultimately bears a son, Ishmael.

That is not the end of the story, however.  God is faithful to his promises. Thirteen years later, he changes Abram’s name to Abraham and Sarai’s name to Sarah and tells them they will conceive a son whom they should name Isaac. God will bless Ishmael as a son of Abraham and make him the father of a great nation (Gen 17:20), but the covenant will be with Isaac and his descendants (Gen 17:23).

Here Abraham and Sarah are, ninety-nine and ninety years old, respectively. They have been waiting over twenty years for God to keep his promise! Keep in mind, this was a promise that seemed absurd even at the beginning. Yet, God was coming through and keeping his word.

This story always makes me sympathize with Sarai’s predicament. In an era in which a woman’s worth was determined by her ability to have children, she had remained barren. This had no doubt caused her much pain, but after so many years, she had probably come to accept it. Then, she hears God’s promise and finds it to be laughable. After all, she is long past her child-bearing years. Her body has lost its life-giving capabilities. And the years continue to go by. So, after ten years, she takes matters into her own hands. Who can blame her? She has certainly been patient. God hasn’t come through, at least not in the way she expected.

God’s promises to us don’t come in such clear-cut messages as they did to Abram and Sarai (at least they don’t to me!).  They come instead in promptings of the Spirit, in ideas put into our heads by our family and friends, and the longings in the deepest desires of our hearts.  We pray for God’s guidance. We have dreams for our lives, plans that we make, and then . . . nothing. Did we misread the signs? Maybe God had something else in mind for us?  Maybe, like Sarah, we get tired of waiting, take matters into our own hands and try to manipulate the outcome. It can be very hard to know when to act and when to continue waiting.

In these situations, what can we learn from Abraham and Sarah? First, if God wants something for our lives, He will find a way to make it happen even if it seems impossible. Second, God can bring good even out of our mistakes. If Sarah had waited patiently for God to come through, Ishmael would never have existed, but God created him and blessed him. His people, too, would be of Abraham’s line. Third, don’t give up on God. He rarely works on our timetable. He frequently makes us wait, sometimes a frustratingly long time. While waiting, our job is to be faithful to His teachings, to continue praying, and make the best decisions we can in light of our present circumstances. God will take care of the rest.