Trending Now
You are at:Home»Featured»Waking the Hero in You
By John Kirkwood on May 2, 2013 Featured, Live in Christ 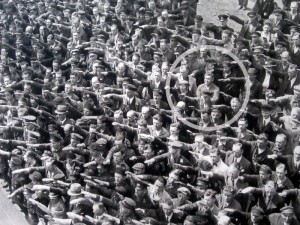 Most people today are abject cowards. Poltroons who fantasize about personal courage in regard to the great moral questions of yesteryear, only as an emotional alibi to cover a fetal position existence.

These are the deserters who rail against slavery and the Holocaust without even wincing at the politician who votes to “shelve” babies born alive or the doctor who flushes them, still struggling, down a toilet. These are the recreants who “bow up” against Hitler, the Nazi’s and the K-K-K while they, as the righteous are stoned, hold the jackets of Planned Parenthood, the SPLC and the Gay-K-K.

They are professing Christians who, seeking the world’s applause, go along with the wizards of wickedness, as the Holy Spirit grieves. They will march with sexual anarchists and shutter their senses while the alphabet locusts over-run everything that is sacred, from the Boy Scouts to the institution of marriage. These are the craven that will post to their Facebook page “put on the whole armor of God” even while theirs is collecting dust in the closet, not a scratch on it.

They are the pastor who would preach self-esteem while the blood of “the least of these” cries out from the dumpster. They are the “conservative” talk show host who won’t cross the “values” Maginot line when it comes to matters of righteousness. They are pretenders, both weak and faithless who ripple Warhol’s fifteen minute pond but won’t rate an asterisk in the memories of their fellow man.

They are, at best, virtuous poseurs — speed bumps on the road to hell. They are the coward next door.

Heroes aren’t commonplace; zeroes are all over the place. So how does one inspire courage in the weak? How does one change the tilt of the heart? It depends on which end of the equation that you find yourself. What if you’re honest enough to realize that you’re the weak link? That you are the Scaramouche in the mirror?

Most zeroes never make it out of the cocoon. They’re content to spend life in their vajamas, turtling whenever they hear a car backfire or a co-worker guffaw. If this is you, there’s still hope but it’s waning. You’ve already travelled further than most by recognizing the yellow streak down your spineless back. The only way out of the apathetic milieu of mediocrity is to reorder your priorities and to live for something larger than what Francis Schaeffer used to call “personal peace and affluency.” You can start by studying the lives of the heroic and following their path in decision making.

When the Apostle was brought to Rome, in chains, he faced a daunting reality. Paul had been accused of a capital crime by a group who had recently found the favor of the less than just, Emperor Nero — the guy who would eventually blame the torching of the city on the “Christians” and then impale them alive and robe them in wax afire, to light his gardens. Yet Paul was steadfast and determined, ready to offer all for the mere opportunity of presenting Christ.

Christians were cowering underground until they witnessed the valiant dignity of the old man who, unashamed and unbowed, proclaimed — “whether by life or by death, with all boldness, Christ shall be magnified in my body.” [Philippians 1:20]

A man simply stands, arms crossed. He is a political prisoner of the Nazi regime and his only crime is that he wouldn’t divorce the mother of his two children, who happened to be a Jew. His two daughters, who survived the Nazi experience, lived out their lives enjoying the fruits of liberty. One day when they had grown old, an obscure picture was brought to their attention and they were reminded of the type of man their father was. It shows their father, August Landmesser, surrounded by fawning and fearful Germans offering the Nazi salute to their Fuhrer, while he stands, arms crossed in radiant defiance. As if to say, “you’ve taken everything that’s dear to me in life but my dignity; I will not bow in subjection to animals.”

Heroes don’t wait for a consensus. They act, they act boldly, and their actions frequently expose them to great peril. Many will die in obscurity, known only to God, but a hero doesn’t act to rate a statue or a poem; he acts because his sense of righteousness has been so offended that he is impelled to action in behalf of justice. Apathy in the face of injustice is greater among his fears than personal injury or even death.

THE HERO IN YOU

The hero, before he ever lifts a finger, is a hero in his mind — a mind that has been prepared by the example of others and by the knowledge that in this life there are people and principles worth living and dying for. Courage, rare as it is spectacular, is the reason our hearts skip when we see Gibson grab the colors in The Patriot and charge into the gauntlet of the enemy; when we see a boy stand in front of a tank or a black woman sit at the front of a bus.

There is no prerequisite: neither age nor station in life matters, heroes come in all shapes and sizes. Acts of heroism are not confined to a grand stage or a battlefield. Lunch counter, city bus, shipyard, PTA meeting, lunchroom or boardroom, and the playground as much as the battleground, these all are fertile ground for heroism.

You have the opportunity today to be that hero. Whenever that man or woman stands for something greater, come what may, they have crossed over from the mundane to the magnificent.

How does one inspire courage in the weak? — With defiance in front of daunting odds, with obedience and devotion and a determined resolve that faithfulness, though it brings persecution and death, will live on. Uncommon valor is the price the courageous will pay to turn the destiny of the weak and the bullied and it will not be in vain.

Courage has its dividend in this life or the next.