Trending Now
You are at:Home»Learn & Live the Faith»Catechesis»Walking in the Truth: The Second and Third Epistles of Saint John
By Rev. Tucker Cordani on December 1, 2011 Catechesis, Featured, MyChurchParish.com

I rejoiced greatly to find some of our children walking in the truth just as we were commanded by the Father —  2 John 4. 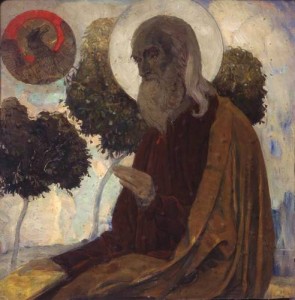 The Bible is filled with such memorable thrift.  Much of the wisdom and prophetic literature of the Old Testament is written in verse.  The New Testament features seven brief letters written by Saints Peter, James, John, and Jude.  Less is more.  Like fine poetry, these short treatises tell the story of the early Church and form an important body of work because they interpret the gospel from the point of view of men who knew Jesus personally.  They saw with their own eyes and heard with their own ears the miracles that the Lord performed and the words of spirit and of life that he preached, poetry in the making.

Saint John wrote three of the seven letters, known as 1, 2, and 3 John.  John was a versatile writer who also composed the gospel that bears his name and the Book of the Apocalypse, or Revelation.  He wrote his letters to churches that needed encouragement for the good work they performed and support in the face of danger.  He warned them against false doctrine and heresies preached by itinerant preachers that attempted to usurp the apostle’s authority.  John urged his assembly to remain faithful to the Word against the alluring teachings of the world.

These letters are not as well known as they should be.  None of them appear very frequently in the lectionary and only in small portions.  Second and Third John appear only twice in the entire three-year cycle of the lectionary, on Thursday (2 John) and Friday (3 John) of the thirty-second year of ordinary time year II.  I recently completed a Bible study in one my parish  in which we studied all seven letters.  Interest in these poetic gems written by beloved saints was high and sustained week after week.  We concluded the study with 2 and 3 John and both offer insight to our church today from John, who was so influential and who was with the Lord from the beginning.  The message of 2 John: whoever remains in the teachings of the Church has in their lives the goodness of the Father and the Son.  The message  of 3 John: members of the churches to whom John writes must support other Christians that walk in the truth and possess the love and the knowledge of the Father and the Son.

Little debate among scholars exists regarding authorship of 2 and 3 John nor about place of composition.  Both letters are believed to have been written from Ephesus circa AD 100.  Neither did Church fathers tarry about including the works in the canon, the way they did with Jude and 2 Peter.  Saints Eusebius, Clement of Alexandria, and Polycarp — a disciple of John — affirmed the authenticity of John’s letters, which read like lyrical poetry narrated in the quiet confident voice of one who offers testimony to his family on the love God has for his children.  They are the twenty-fourth and twenty-fifth books of the New Testament and the shortest books in the Bible.  The author attributes the brevity of these letters — twenty-seven verses between the two — to his desire to save ink and paper so he can speak face to face with the members of his community.

As the beloved disciple, John possessed great credibility in the Church.  The tone with which he writes to his communities, quiet, still, filled with God’s confidence, is masterful, gentle, creative, and literary.  John knows that his audience is faithful to the gospel.  The Spirit is active in the church as noted by the examples the writer provides.  In 2 John the author writes against deceivers, those who deny the incarnation.  The careful, pastoral tone of the letter makes clear the love he has for the “lady elect” and her children, what scholars claim means the Church and her members.   He has heard of their truth, their love and the firmness with which they stood against the heretics.  He deals with the law, the truth, and love in the Church.  His purpose is to praise his fellow Catholics and to remind them that the Christian is governed by a law of love.

And this is love, that we follow his commandments; this is the commandment, as you have heard from the beginning, that you follow love (2 John 6).

This epistle is like Saint Paul’s letter to Philemon, a personal letter written by John to the “elect lady” and to her children, that is, to members of the Church who walked the truth in love.  A local church was extending hospitality to heretics and John warned them to stop.  Troubles have arisen within the community and John writes to convey his thoughts on Christianity and the universal Church.   He addressed the issues they faced and offered an affirmation of the truth that he received from Jesus and which he now hands on to them: love is the first and the greatest commandment.  Loving God means keeping his commandments (see 1 John 5:3).  Comprised of thirteen verses, 2 John is the shortest book in the Bible.

The subject of 3 John is “walking in the truth” and he writes to praise them for their faith.  Walking in the truth refers to the manner of which true disciples journey in obedience to the commandments of God.  Members of the community are divided over the teaching of heretical traveling preachers.  John writes to praise them for their faith, for “walking in the truth.”  The faith of his church is growing strong, and he remains connected to them even while he is away.  Personalities and conflicts will happen, John says, but the Church must remain centered on the only true God and Jesus Christ whom the Father has sent for the world’s redemption.   There is no greater joy tan to walk in the truth of Jesus Christ.

I greatly rejoiced when some of the brethren arrived and testified to the truth of your live, as indeed you do follow the truth.  No greater joy can I have than this (3 John 3-4).

Third John — what Jerome called 2 John’s “twin sister” —  carries a similar theme.  However, this letter deals with personality conflicts.  Gaius, to whom the letter is addressed, is urged to extend hospitality to true teachers of the Word.  John commends Gaius for having received and served the ministers.  In 2 John, the apostle warned against receiving false teachers.  In 3 John he encourages the believers to receive the true brethren.  Missionaries in the early Church were mendicants.  They received hospitality and sustenance from the homes of the believers to whom they preached.  Gaius opened up his home to them and for this he received praise from John.  A disciple named Diotrephes opposed giving hospitality to the visitors and so John excoriates him.  “He likes to put himself first” (9).  While there is only line written about Demetrius, it gives us insight into the Christian character of this saint.  “Demetrius receives a good report from all, even from the truth itself” (12).  Even God commends the disciple Demetrius.   “We give our testimony as well, and you know our testimony is true” (12b)

George D. Gopen, PhD, a scholar of Law and English who has taught at Harvard and at the University of Chicago argued that the study of poetry is the best preparation for obtaining a law degree.  What other discipline requires a student to pull great meaning from a text that, by its nature, attempts to say a great deal in as few words as possible?  Less is more.  Hence it is that despite the brevity of these letters, exegetes throughout the centuries have crafted many books and dissertations to pull meaning from them. One word of God — “Jesus” — has been sufficient to keep the Church talking about the Incarnation for centuries.  Consider how much there is for use to glean from the about the rest of the words in the Bible that exist to support our understanding of the Divine Word, especially the words of one as close to Jesus as was Saint John.