Trending Now
You are at:Home»Featured»WARRIOR: A Fight Film Like No Other
By Stanley D. Williams, Ph.D on August 24, 2011 Featured, On TV and Movies 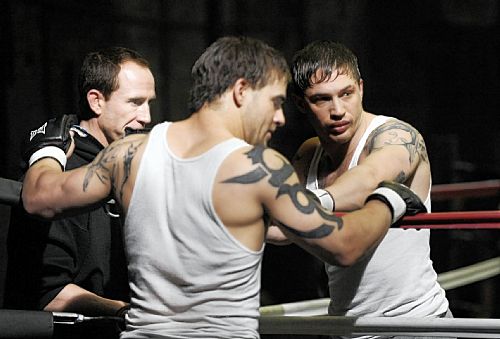 Tommy Colon and Brendan Conlon are estranged brothers who end up fighting each other inside a cage for the Mixed Martial Arts championship popular with ex-marines. At first punch and bruise (and there are a lot of them in this movie) it appears to be just another pugilistic movie filled with gratuitous violence designed to entertain the battered minds of a bitter disenfranchised generation. And it may be all that — but only in part. For this story is a gripping, won’t-let-you-go study of what it means to fight for noble causes, what it means to love, forgive, and find redemption.

Haunted by a tragic past, Marine Tommy Conlon (Hardy) returns home for the first time in fourteen years to enlist the help of Paddy, his father (Nick Nolte). Tommy wants Paddy, a recovering alcoholic who’s returned to his Catholic faith, to help him train for Sparta, the biggest winner-takes-all event in mixed martial arts (MMA) history — with a $5 million purse. A former wrestling prodigy, Tommy blazes a path toward the championship with quick, frightening knockouts. Meanwhile, his brother, Brendan (Edgerton), an ex-MMA fighter-turned high school physics teacher, returns to the ring in a desperate bid to save his family from financial ruin (the bank is ready to foreclose on their house). To the ringside crowd and the sports commentators (played by themselves), Tommy is a mystery fighter that came out of nowhere while Brendan is an over-the-hill fighter who is expected to be dispatched in the first round.

But what the experts don’t know is what’s driving the two men. Neither are fighting for glory, money, or egos — but something much more important — the redemption of their lives, which is complicated by a father they both despise for abusing their mother so badly that she ran for her life from him years earlier. “Pop” has now been sober for 1,000 days, has returned in a meaningful way to his Christian faith, and agrees to coach the deeply bitter Tommy even though ringside Paddy roots for Brendan. In the end, the two brothers must confront each other and the forces that originally pulled them apart in the MMA finals. The climax is perhaps one of the most unforgettable in the history of cinema.

The uniqueness of the story is that neither Tommy nor Brendan are fighting for personal glory. Tommy is an AWOL marine from Iraq. Why he’s AWOL harkens back to the story of Ishmael and Moby Dick and the biblical story of Job. Throughout the movie, Paddy (Pop) listens to Moby Dick on tape, and in a climax of his own, Paddy confronts the forces of nature that he (like Ahab) has brought upon his crew/family. Tommy is fighting for the families of the marines that were lost on the tragic day in Iraq that sent him running. He feels guilty that he alone survived and winning the $5 million dollar purse, which he intends to give to the families of his deceased warrior friends, will go a long way to erase his guilt for not dying with his comrades in arms.

Meanwhile, Brendan, who long ago gave up a successful career as a MMA fighter to become a humble but popular high-school physics teacher, gets upside down on his mortgage, and a hawk-like loan officer isn’t going to lose any sleep about foreclosing on Brendan, his wife and kids. But then, when Brendan begins to moonlight as a MMA fighter again, and wins a fight in the parking lot outside a local strip club bringing home the $500 purse to pay on the mortgage, the school board suspends him from his job without pay. Fighting outside strip clubs isn’t exactly the role model the school expects of its teachers.  In this there is humor when  his school principal ends up cheering him on with every ounce of his being. Also coming to his support is his wife, Tess who initially tells him: “I will not watch you fight” — but nonetheless puts her heart in the ring with him. As the audience, we cheer Brendan on as well, because, as his trainer tells him when he’s about to lose the second round championship fight, “Why are we here? If you don’t knock him out you don’t have a home.”

I want to say that the movie has two (dual) protagonists, Tommy and Brendan. But that isn’t really true. Brendan is the protagonist, and Tommy is the antagonist. Each has a tangible, physical goal, yet each is prevented from reaching that goal until they confront the psychological vice that blocks their progress — each must confront the truth that the movie is about (see “The Moral Premise” below). One of the endearing qualities of the picture is that the audience wants both Tommy and Brendan to win for different noble reasons. Consequently, the irony behind their estrangement makes the final two rounds of the final fight a love affair, in a very real way. I won’t reveal the ending here; it must be experienced. But I am looking forward to watching the movie againwhen it’s released to theaters and I can vote with my wallet.

WARRIOR is like DIE HARD in the metaphor department , and both movies use the same theme music “Ode to Joy” that you may know as ” Joyful, Joyful, We Adore Thee.” Few women or mothers may understand what I write next, unless they are responsible for earning the family income and paying the bills. I suspect that most responsible men (and I consider myself one of them) have battled month after month, most of their lives, trying to pay bills and keep the family’s financial head above water. It is a constant battle in our consumer, materialistic society, where even as Christians we’re even harangued into giving every last dollar to the thousands of worthy causes that make us feel guilty if we don’t give way beyond our means. In DIE HARD, John McClain battles a tower filled with terrorists, who end up humbling John’s arrogance so John is ready to be a loving, caring and serving husband once again. The bloody fight with Hans Gruber and company is a metaphor for what John’s going through psychologically to get his wife back.

In WARRIOR the physical fighting is a metaphor for the psychological battle Brendan and Tommy (and Paddy/Pop) go through to find psychological redemption, and financial security as well.  The fighting seems over the top and gratuitous until the last moments of the film, and then the metaphor and the brutality make sense. Watch and listen carefully to the last moments of the final fight. Sit on the edge of your seat and don’t miss it. What happens… what both men do… is nearly impossible for any other man to do in most casual situations, let along a championship MMA fight in front of millions on live TV.

Thus, the story beat that will grab you is how the brothers reconcile with each other and their father. It doesn’t seem possible, but then miracles do happen.

If you’ve read my book, The Moral Premise, then you know that all successful movies (indeed, all successful stories in any medium) are about a conflict of values that prevent all of the main characters from achieving their physical, or outward, goals, until they confront the psychological blockage in their system of moral values. In WARRIOR the conflict of values is about bitterness vs. forgiveness. And until forgiveness takes place, no one is going to win any fight. Here’s WARRIOR’s moral premise statement:

WARRIOR is an exciting and engaging human drama film, with award winning acting, direction, sound, editing, and a genre setting benchmark ending. It’s an Oscar contender and worthy film for adults and mature teens that explores the values in the human condition that are worth fighting for.