Trending Now
You are at:Home»Featured»WARRIOR: The Hope of Redemption for Dysfuntional Familes
By Kay Anne Kelly on September 17, 2011 Featured, On TV and Movies 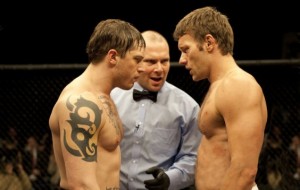 The recent release of the movie WARRIOR  has prompted many different “takes” on the story.  I would like to focus on the impact of addiction as portrayed in the film.  The Conlon family, having been torn apart by the father’s violent alcoholic behavior, is in a situation that many people, unfortunately, can identify with.  Alcoholism and its attendant destructiveness has touched more lives than not.  WARRIOR offers a realistic example of the human carnage wrought by addiction of any kind.

As teenagers the older brother, Brendon, stays behind with their dad as the mother and younger son, Tommy, leave after years of “mom being a human punching bag”.  Tommy is with his mother as she dies in poverty, coughing up blood as she prays to God.  Brendon goes on to college, becoming a physics teacher and marrying his high school sweetheart.  Younger brother heads into the Marines and the war in Iraq.  Neither brother experiencing a healthy childhood, they are ill prepared for life’s challenges.  Both were trained as fighters by their father, little did they know their greatest fight would be within.

Years later they are brought together by the same person who tore them apart.  Paddy Conlon now has one thousand days of sobriety under his belt.  Neither son wants any part of him as a father nor of his recovery, but Tommy actually needs him for one thing:  training for Sparta – a giant Mixed Martial Arts event with a winner take all of five million dollars.  With all that Dad Conlon did wrong he did one thing right:  he knew how to train Tommy for a fight.  Tommy now needs that money for an unknown purpose and is willing to let his dad train him as long as it does not require forgiveness or any hint of a renewed, and healthier, father/son relationship.  Dad agrees, on one condition:  Paddy Conlon demands the pills Tommy has been taking as a condition for being Tommy’s trainer.  Handing his dad two bottles of pills Paddy asks for the third, he “heard” three bottles as his son walked into the room.  Tommy grudgingly hands it over.  Dad is using his one card in an attempt to save his son from a fate similar to his own.

Brendon finds that past medical bills and changing finances means he will soon lose his house.  In a desperate attempt to be the reliable father he never had he promises his reluctant wife they will not lose their home.  There is only one way to make the kind of money he needs.  It means returning to the ring where he enjoyed some measure of success earlier in life.

Both boys, now grown men, accept a violent means of achieving their goals.  Tommy and Brendon share a deep anger towards their father, not necessarily unjustified.  But when the brothers meet, Tommy explodes at Brendan’s fraternal overtures — the only thing he thinks of when he sees his big brother is another male who bailed on him.  Brendan was supposed to join Tommy and his mother when they left, but his desire to be their Dad’s favorite (as Tommy had long been) and his relationship with his then girlfriend, kept him from leaving.  This left Tommy to care for and, eventually bury, their mother all alone.

Addiction is similar to a pipe bomb.  Throw it into a family and see who gets hit and who gets hurt the worst by all the nails, glass, and shrapnel.  Is the fighting in the MMA cage really more violent than watching your mother be beaten senseless by the man who is supposed to honor and protect her?  And yet, as a child, you love this man and long for his approval.  Tommy goes to great lengths to assure his trainer father he has no use for him and liked him more as a drunk.  But when he finds his dad a ranting drunk he lovingly tucks him in and rocks him to sleep.

Many children of abusive or addictive homes think they can change their future by simply eliminating the source of the problem.  If they do not drink then their family will be normal.  As long as they are not hitting their kids then the problem has been resolved.  If a predatory family member is dead or unable to be near the family then the abuse suffered at their hands is over.  Any counselor worth their title will tell you otherwise.

Twelve step programs (for addicts AND their families) work because of accountability, support and a belief in something beyond yourself (higher power).  Most people call that higher power God.  Dad Conlon found God as he became sober; his spiritual – Catholic — renewal is made front and center in the first few minutes of the film.  Even with his recovered faith life he must still make reparations and suffer the rebuffs of his sons who care little for his fatherly love after a lifetime of emotional abuse.  But try he does.

Cage-side their father must watch from afar as the edge-of-your-seat climax approaches:  in a single elimination tournament the final two fighters are his boys.  Newly discovered information on Tommy makes his story as powerful as his older brother’s  –  both men are fighting for something, and someone, beyond themselves.  One offered a family relationship but the other denied even being his brother.  One brother seeking wholeness, one brother obviously shattered must be broken completely before seeing how desperate he truly is.  No wonder that the director has called this “an intervention in a cage.”

Talk to many recovering addicts and you will find a common theme:  they had to hit rock bottom before they would even consider getting help.  One brothers final tap-tap-tap does more than release the physical hold he is trapped in, it is the beginning of the emotional release he needs to begin healing.  Admitting it is the first step to recovery.  We don’t get to see or know if they make it to the second step – but we hope.

One hopes that both boys make it to an Al-Anon meeting for their own sakes and for those they love.  Abuse must be faced so that forgiveness can become a reality.  Children of addicts and/or abuse not only need to recognize the cause of the suffering inflicted they need to be proactive in the healing process.

Alcoholism affected both of my parent’s families.  Their decision to not serve any alcohol at their 1954 Irish Catholic wedding in NY City was considered scandalous by both sides of the family, but this was one tradition that neither of them wanted handed down.  Decades later they realized that merely not allowing alcohol in their home did not stop some of the co-dependent behaviors learned through the years of their individual childhoods.  Counseling and Al-Anon were not available when they got married; they just did the best they could with what they knew.

It became their nine children’s goal to stop the cycle completely.  It took one generation to stop the addiction, it took the next to step forward and face the behaviors and tendencies inherited from addiction and abuse.  Our children, God willing, will be the generation that appreciates the house built on rock, not on sand.

Who do we hold accountable for the pain in our lives?  Who suffers most from unforgiveness?  Forgiving does not mean we are allowing an abusive person back into our lives to wreak havoc all over again, it means releasing ourselves from the chains of that emotional weight… and it is dead weight.  An abuser does not need to ask for forgiveness to receive it — many victims of childhood sexual abuse have found great peace and strength in forgiving their abuser even after that person is dead or without any contact with the abuser.  Forgiveness does not just happen, it is a prayerful and often times soul wrenching journey.

We see in Paddy’s sons a physical manifestation of the painful battle children of addicts must fight.  How apt that Paddy trained them as fighters, for fight they must if they are bring wholeness and healing into their own lives.  This movie is not really about “cage fighting” – it is about the spiritual warfare we all must enter into, and those who face addiction, with special intensity. See it. It will give you hope.