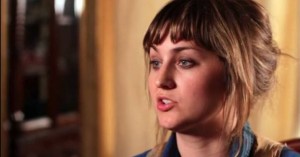 CBC President Jennifer Lahl interviews Alana S. Newman, the founder of the Anonymous Us Project about an event that took place in New York on October 1.

Jennifer: Last week I received a Google alert telling me about a charity fundraising event in New York City to raise money for Gay men to have babies via reproductive technology and surrogacy. I knew there was no way I could attend, but when I posted the event on facebook, Alana you chimed in right away that you could go! So I quickly mailed you a Hands off our Ovaries T-Shirt and you went! Tell me what happened.

Alana: Yes, thanks for the tip! And for the incredible shirt and mug (which everyone should go on your website now and buy — the shirt fits amazing).

I found out the fundraiser was sold out, but figured I didn’t want to pay money to contribute to the efforts anyway. So I decided I would damper the spirits and try to make everyone’s checkbooks a tad less generous by passing out fliers (at right; click to enlarge) to everyone as they entered the show.

The last time I went to a live event regarding third party reproduction issues, I was nearly assaulted. So this time I took my husband and made him stand within rescuing distance. But I think the fliers were a good strategy, instead of the incendiary picket signs I’ve brought to things in the past.

JL: How were you received by the people who saw you or interacted with you? 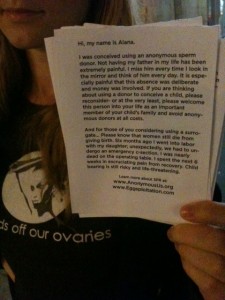 ASN: The first three people I gave fliers to read them right in front of me, gave them back somewhat aggressively and said, “Come on . . .”

Most everyone else took the flier and read it peacefully as they entered the building. I wasn’t what they were expecting. I’m sure I was a buzz-kill to most. The only people that did not take the flier were the famous Gary & Tony from CNN’s Soledad O’Brien special. They gave me a dirty look and denied taking my flier the same way one would deny a handshake — so I suspect they’ve seen me or heard of me. Maybe they didn’t like the Family Scholars blog post I wrote about them.

JL: Why is this issue so important to you?

As a donor-conceived person I miss my biological father every day. His absence has effected me profoundly. I have no doubt children created through egg donation and surrogacy will grieve their mothers just as much if not more than I have for my father.

JL: Do you feel that your work and my work are getting traction? Why?

ASN: I do, I really do. People see the truth in what we’re saying. Parents fear their donor-conceived child will end up like me, but they know its a possibility when they initiate the process. It’s the most natural thing in the world to want to know who your parents are, which is why the UN Human Rights Convention asserts that every child has a right to be raised by their natural parents. Nearly everyone recognizes the truth and reason in what I have to say after I get an hour or two with them. The problem is that the infertility industry has cultivated a language full of euphemisms and lies that cloud the truth and confuse people.

JL: Moving foward, tell me ways we can work together. I’m in California and your in New York.

ASN: Well to start off, I’ve got a manuscript for Anonymous Us the book that I’d love you to read. To be perfectly blatant, I think you’re a marketing genius and I would love to learn from you and mimic what you do. Show me how you do things by giving me things to do!

This article is courtesy of the Center for Bioethics and Culture.