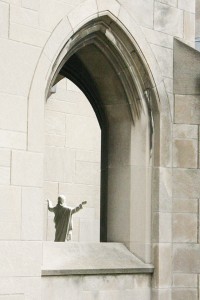 And to be short, when all the world dissolves,
And every creature shall be purifi’d,
All places shall be hell that are not heaven.

Anthony Hopkins is one of those few, extraordinary actors who can make even a mediocre role interesting.  As a result, he’s probably the best thing about “The Rite,” a drama about modern Catholic exorcists released as a DVD [recently](May 17).

The movie deserves some praise for taking the subject of evil seriously.  Unfortunately it suffers from important storyline flaws and factual inaccuracies.

The film is based loosely on Matt Baglio’s non-fiction book, “The Rite: The Making of a Modern Exorcist” (Doubleday, 2009).  And unlike the movie, the book is a measured, intelligent and quite sobering look at the Catholic ministry of exorcism in the modern world.

The focus of Christian life is God, not the devil.  Paying too much attention to the demonic is just as dangerous as denying its existence altogether.  Nonetheless, Jesus clearly believed in the reality of Satan; so did every great saint; and so does the Church down to our own day.

For Catholics, the devil is not a legend or a metaphor or the imagining of pre-scientific minds.  The devil and the corrupted spirits who joined him are real, personal beings—in Scripture, fallen angels—consumed by hatred of God and humanity; rebel creatures with limited power but immense ability.

That ability can result in demonic harassment, or in rare cases, even diabolic possession of human beings.  The work of the priestly exorcist is to liberate persons suffering from this oppression.

Baglio’s book makes a number of key points confirmed by the experience of priests and bishops.  More than 90 percent of persons claiming demonic harassment or possession actually suffer from emotional pressures, or physical or mental problems, that are medically explainable and treatable.

Most people don’t need an exorcist. They need a good doctor or counselor, and a better prayer life. It’s also an unhappy fact that every time a movie or book like “The Rite” appears, impressionable minds too easily see the hand of the devil in their own ailments and difficulties. This is why bishops almost always insist on a medical opinion and the judgment of a person’s pastor before involving an exorcist.

Having said this, it’s also true that profoundly disturbing cases of diabolic oppression and possession do occur—and not just in the Third World, but increasingly in modern developed states.

As Christianity has weakened in consumer societies, superstition, Wicca and dabbling in the occult have grown.  Ouija boards and videogames swarming with demons may seem like harmless fun; but they’re not.  They open the door, even if only so slightly, to a very real and unhealthy darkness.

Closing that dark door can only be done through personal confession and renouncing the occult in Jesus’ name. In fact, it’s worth reading Scripture about fortune-tellers and those who toy with the spirit world: The Bible is ferocious in rejecting anything that hints of the occult precisely because it violates the First Commandment and the sovereignty of God.  There is no God but God; and every occult or spiritual alternative to the true God is the work of God’s (and humanity’s) Enemy.

The Easter season—these beautiful weeks that renew our hearts and offer the whole world hope—celebrates the resurrection of God’s son; the triumph of Jesus Christ; the restoration of human dignity; and the defeat of Satan, suffering and death.

This is a time for praise; a time for gratitude and worship.  But in the midst of our joy, we should remember that we were ransomed on the Cross at a very dear price.

We were delivered from an Adversary who thrives on sorrow, cynicism and hate; who wars until the end of time against the loving Father who made us.

We cling to God for good reason. The alternative leads down a very different path.