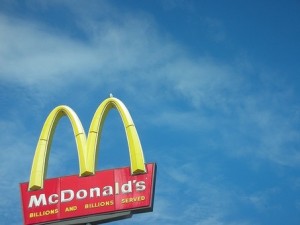 Have you ever wondered how many people you’ll meet in your lifetime?  I was on a road trip with my wife and kids last week and we stopped at the Worlds’ Loneliest McDonald’s.  I’ve also been to what local urban legend reputes to be The World’s Busiest McDonalds.  It stands all alone amid the never ending traffic of the Chicago Skyway — six lanes that carry nearly 20 million cars a year, hundreds of feet in the air above Calumet Harbor on the shores of Lake Michigan — with no other restaurants on the whole Skyway.  Fast food restaurants “fish from the stream,” so the saying goes, as opposed to being “destination dining,” and I guess with a lot of fish in the stream it catches a lot of customers.

Well, The World’s Loneliest McDonald’s is also all alone, but on patch of grass carved out of a vast ocean of corn somewhere in theMidwest.  I’m not sure exactly where, since I was using the GPS on a long-haul drive across country.  Ever since I got comfortable with the GPS I’ve stopped looking at maps.  I know, it’s not a good thing and I’m not proud of it, but it’s true.  In the old days I’d study out my routes, keep track of mile markers, note exits, and generally stay abreast of where we were in our journey.  Not anymore.  Now I just get in the car, enter our destination, and let the GPS do the rest.  It gives me turn-by-turn instructions and a running calculation of our ETA.  It’s pretty amazing, but the down side is that anymore I only have a hazy idea of where I am at any given moment or where I’ve been.

But wherever it was, we were chugging along a deserted highway in the middle of nowhere when we saw the improbable sight of Golden Arches rising above waiving fields of corn.  Just at that moment the kids were cranky and nature was urgently calling to all of us, so our diminutive band of road weary wayfarers was filled with joy at beckoning neon promise of clean bathrooms, a chance to stretch our legs, and a tasty repast seasoned with secret sauce.

Forget the Skyway’s six lanes of zooming interstate congestion, this little outpost of globalization was tenuously tethered to the highway by a humble access road bereft of even so much as a stop light.  I’ve never experienced such a quiet and bucolic setting for a fast food restaurant.  We were hours from the slightest hint of anything faintly urban, there were no other cars on the road, and corn stretched as far as the eye could see.  The only sounds when we opened the car doors to let the kids romp on the grass between the Mickey D’s and the surrounding palisades of corn were buzzing insects and rustling corn stalks.

My wife went in first to use the bathroom while I stayed out with the kids and changed their diapers.  After diaper duty was done, my wife came back and I went in.  The only other customers inside were two old ladies sitting drinking coffee.

They turned to me and one said:  “Hey, you’re pretty handy with a diaper.”

“We were watching you out the window,” the other said.  “That was fast work.  Efficient.”

“I’ve learned,” I told them.  “Only bad things come from delay when you’re in that situation.  He who hesitates is lost.”

They laughed, and they were still sitting there drinking coffee when I left.  We said goodbye to each other and I went out to load the kids up.  When everyone was back in the saddle, we hit the drive-through for our snack and we were back on the road.

It’s a good thing we stopped when we did — there wasn’t another place for hours.  Yet, even there, in a dusty, forgotten corner of the global McDonald’s empire (“The sun never sets on McDonald’s”), I met a couple of new people.  Later, I had to wonder, how had I come to meet that pair of old ladies in the middle of nowhere?  What strange paths led us all to converge at that place at that time?

It was like what a friend noted once about a book.  He was in the Navy and found himself one night on a ship in the Indian Ocean.  He couldn’t sleep, so he went down to the Ward Roomwhere a sort of informal lending library had developed.  Books that made there way onboard but didn’t depart again (or at least hadn’t yet) ended up on a shelf that anyone was free to borrow from.  My friend picked one at random and opened it up.  Inside the front cover was an inscription:  “To Edmund — Bozeman, Montana, 1956.”  My friend was struck with wondering about the path of that book which had brought it rest there, bobbing in the  Indian Oceanon a Navy destroyer, some 50 years later.  How many people had read that book?  What hands had touched it?  A book launched into the world takes on a life of its own.  There’s no telling where it will end up or how it will get there.

I realized from my encounter in The World’s Loneliest McDonald’s that we humans circulate in the same way.  It’s amazing all the contacts we each have every day with so many other people, ranging from good friends to strangers passed on the street.  And it’s surprising the impact those contacts have — for good or ill.  We’re often influenced by people who don’t even know they’ve touched our lives, in matters both prosaic (like that guy with a cool bike trailer I saw and told my wife about, and now we own one) and profound (like a child I saw in a wheelchair who made me realize how lucky my family and I really are).

You don’t even have to see a person to be impacted by them.  There’s someone in one of the apartment buildings near us who plays the saxophone – really well.  We have no idea who the person is, but we love to lay in bed at night with our windows open and be transported by his or her beautiful music.

Then there are the things we read.  An old saying goes:  “We are most influenced by the people we meet, and often we meet those people for the first time in the books we read.”

What’s really amazing as a parent is to realize that our kids are going to be launched into the world, and take on a life of their own, just like that book my friend found floating in the middle of the Indian Ocean.  And our children will become the people who meet and most influence others (whether in person, by audio, print or who knows what new technologies there may be by then).  Everyone wants to make a difference in the world, to make an impact, and there’s no greater difference a person can make than as a parent — to the life of the children entrusted to their care, and through those little people we parent to more souls than we can really imagine.

My Mom was a stay-at-home parent, and when people would ask her (frequently with a whiff of condescension):  “What do you do?” Mom used to love answering:  “I’m raising the leaders of tomorrow.”

And she was right.  Whether it’s the public leaders we all see in positions of high media exposure, or the quiet leaders making a difference in a million little ways everyday, tomorrow belongs to the Moms and Dads of today.  Perhaps most especially in raising the leaders of tomorrow’s families, those who will parent the next generation launched into the world after we’re gone.  The Moms and Dads embarked on the odyssey of parenting are the one’s making the future (literally and figuratively), shaping the world of tomorrow not just through their own actions, but also through how they raise their children, and that influence extends on to their children’s children after them, in a cascading cataract of influence stretching far into the future.

So to all those future-making Mom’s and Dad’s out there:  Even when the prevailing fashions of current opinion don’t comprehend what it is that you do — to the point that people actually have to ask because they just don’t get it — or why it’s so vital, or why anyone would sacrifice so much of themselves for another in the vocation of parenting, never loose sight of the importance of your work.  We’re all depending on you, even those who don’t know it!