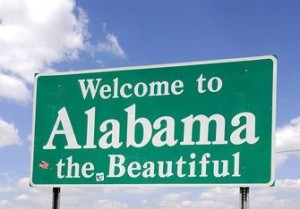 When we first announced to friends and family our decision to move from Las Vegas to rural Alabama, you would have thought we said we were all growing bushy beards to live as hermits in a cave, way over in Mars, with Forrest Gump as our cult leader.  But time has proven that:  in the intensifying legal battle over the issues of life, marriage and religious freedom, the state of Alabama is on the right track.

First, in 2006, there came the approved amendment to the State Constitution, the Alabama Sanctity of Marriage Act, that made it unconstitutional to recognize or perform same-sex marriage. No Sodom and Gomorra here.

Then, in 2012, there was the re-election of Judge Roy Moore as the Supreme Court Chief Justice. Moore being the famous judge who refused to remove the Ten Commandments from the courthouse more than a decade ago. He campaigned with the statement: “The true issue is whether we can acknowledge the sovereignty of almighty God over the affairs of our state and our law. That I will not back down from. I will always acknowledge the sovereignty of God and I think we must.” Justice Moore’s re-election signified a people’s desire to entrust their rights in the hands of a religious Christian.  No separation of Judeo-Christian morality from the state here, either.

During the same elections, the state of Alabama approved another amendment to its State Constitution that no employer shall be mandated to participate in the Federal Health Program (which of course included funding for abortion, contraception and sterilization.) The message was: no federal overreaching interference welcome here.

This January saw the jubilant news that the Alabama Supreme Court ruled that the definition of ‘child’ includes the unborn.  The Supreme Court stated that: “The decision of this Court today is in keeping with the widespread legal recognition that unborn children are persons with rights that should be protected by law.” Furthermore, it affirmed that: “the decision in the present cases is consistent with the Declaration of Rights in the Alabama Constitution, which states that ‘all men are equally free and independent; that they are endowed by their Creator with certain inalienable rights; that among these are life, liberty and the pursuit of happiness.”

As for euthanasia, the common law provisions still stand:  it is considered a Class A felony murder for a person to cause the death of another person with intent to cause the death of such a person.  Furthermore, physician assisted suicide is not condoned or authorized.  In short, we don’t want to kill y’all over here.

Way to go, Alabama!  If only you were a political trendsetter for the rest of the country.

I’m well aware that it is the same state the threatens immigration practice, cracked-down on the rights and status of my fellow immigrants and authorized it’s police to ask for my papers if they catch me violating driving laws just because I have brown skin and black hair.   As I am very much cognizant of the Catholic Church’s stand on immigration to oppose enforcement-only policies and support comprehensive immigration reform, citing under the Catechism 2241 that the more prosperous nations to the extent they are able, are obliged to welcome the foreigner in search of security and livelihood which is not available in his country of origin.

Before the ethnic minority population denounces me a persona non grata, put down those pitchforks and let me explain why I cheer on this conservatively religious southern state.  It is not just the numbers game that Alabama’s voters got 4 out of 5 out of the Church’s teachings correct.  Nor does it have anything to do with the fact that the University of Alabama’s Catholic football coach Nick Saban trumped Notre Dame at college football.  It is simply that, in the hierarchy of rights, Alabama’s voters and leaders have chosen the primary, non-negotiable issue of life over privacy, over health, over women’s rights, over livelihood, over the culture of death.

Alabama is trying to build the kind of world I want my children to be part of:  where life is the first inalienable, God-given right from conception to natural death; marriage is a sacrament and the basic foundation of a family and society; religious freedom is practiced by the Church; God’s laws are supreme and justice is grounded on truth and morality.

Alabama isn’t perfect (nowhere in the world is), but this is a place I can envision my children’s faith flourishing so that they can be prepared for their final home in eternity. To that end, even my own temporal self-interest, convenience, and strong opinion on immigration must be sacrificed for the good of their souls.

I continue to work with my parish for justice for individual immigrants and pray for just immigration laws, but in the long run, I choose life. More specifically, I choose the lives, faith and future of my children, both born and yet to be born.