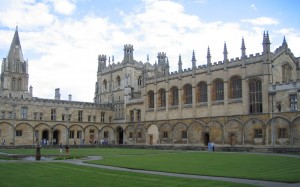 My junior year of college I took a year off from my chemistry studies and went on an adventure.  I spent a year studying English literature, philosophy and Latin at Blackfriars College, a part of University of Oxford.  Academically, I got my butt handed to me.  Once, after spending days poring over a philosophy text and writing the best 12-page paper I could, my philosophy professor, called a tutor, asked me if I had gotten drunk and then stayed up all night writing that paper.  In a word, he thought it was “terrible.”  Before Oxford, I was a straight “A” chemistry major.

Despite my academic setbacks, Oxford was a fantastic experience.  I had no money so I got a job at the famous Turf Tavern and poured more pints of Old Speckled Hen, Headbanger and Dogs Bollocks than one person should.  I also loved English television.  Their adverts (commercials) were better then some of our best shows, so much so that I would consider getting a satellite dish if BBC America started playing British adverts instead of mind-numbing American commercials.  I spent the year gorging myself on cheese and pickle sandwiches, gammon and pineapple crisps, and trifle.  Washing it all down with the best ale you have ever tasted; so good, it doesn’t need to be cold to mask the flavor.

But lately I have noticed my beloved Oxford is nurturing academics who are exporting some seriously pernicious ideas.  Of course, there is Peter Singer who needs no introduction.  He did his graduate work in philosophy at Oxford after which he wrote Animal Liberation and Practical Ethics. Both books argue the utilitarian perspective that ethics are based on the greatest good for the greatest number of people. Animal “rights,” infanticide, euthanasia…  Oh my!

Singer’s student was Julian Savulescu who is now the Director of the Oxford Centre for Neuroethics and the Director of the Oxford Uehiro Centre for Practical Ethics.  Dr. Savulescu has written much on “procreative beneficence” in which he argues that parents should choose the “best” child slated to have the “best” life judged simply on his or her genetics.  Savulescu is also the editor of the Journal of Medical Ethics that recently published the now infamous article “After-birth abortion: why should the baby live?”  Savulescu wrote a defense of the infanticide justification calling it nothing new and suggesting that it was those of us who found the entire thing morally repugnant who had the problem.

Not surprisingly, the authors of the “After-Birth Abortion” paper that has sparked some serious outrage, also have ties to Oxford.  The first author, Dr. Francesca Minerva, while getting her Ph.D., was a visiting student at Oxford’s Uehiro Centre for Practical Ethics where she is now a Research Associate –the same Centre for Practical Ethics where Savulescu is the director.  The other author of the infanticide paper is Alberto Giubilini who has a podcast on the University of Oxford website where he argues that “there is no sound moral reason against euthanasia.”

Then there was the recent paper in the journal Ethics, Policy & Environment where the authors “explore” ways to engineer humanity to “combat climate change.”  Among the possibilities discussed was stunting our children’s growth with drugs or genetic modification to make them smaller or genetically modifying our eyes to be like cat eyes so we won’t need lights at night.  S. Matthew Liao, professor of philosophy and bioethics at New York University, has gotten all the press but the other two authors are, guess what? Yep, from Oxford.  Anders Sandberg and Rebecca Roache are both professors at Oxford’s Future of Humanity Institute, a part of the University of Oxford’s Faculty of Philosophy.

Is this the same Oxford of C.S. Lewis and J.R.R. Tolkien?  Doesn’t seem so.

Why do I find this concerning?  Wesley J. Smith is right.  What first begins as discussions in academic journals becomes policy for the masses.

Is Oxford the only ivory tower spewing scary utilitarian ethics?  Of course not, but lately it seems to be leading the charge.  I for one will be keeping a very close eye on both Oxford’s Uehiro Centre for Practical Ethics and Future of Humanity Institute — neither of which seem very ethical or very promising for humanity’s future.