Trending Now
You are at:Home»Columnists»What I Learned from Having the Sikh Temple Shooting (Practically) in My Backyard
By Marge Fenelon on August 7, 2012 Columnists, Featured, The Social Order 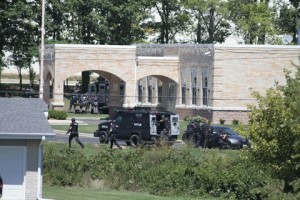 Sunday, August 5 was the date of our first annual parish picnic; little did we know that it would be a date marked on calendars for another reason. As we gathered to begin the 11:00 a.m. Liturgy, an ambulance raced down the street past the park. I’m sure most of the parishioners offered a Hail Mary or the Sign of the Cross – an old Catholic tradition – for the person(s) in need of help. We later would find out that the persons in need of help were members of another faith community terrorized by a mass shooter.

Some time before 10:30 a.m., a gunman walked into a Sikh Temple in Oak Creek, Wis., and opened fire on the congregation. A weapons instructor who lives nearby told the media that the shots were coming as fast as one could pull the trigger. Women were gathered in the kitchen in order to prepare the “langar,” a free, shared meal that is part of a Sikh tradition emphasizing equality and common roots. The children were in Sunday school in the downstairs classroom. When the shooting began, the women and children hid in the pantry. A few of the men locked themselves in the bathroom so they could call for help before being shot themselves. One man lost his life trying to tackle the shooter. A police officer was shot multiple times trying to help one of the victims. By the time the rampage ended, seven persons were dead, including the shooter, and three more were critically wounded. There is no apparent motive for this act of what authorities are calling, domestic terrorism. This shocking atrocity has gained international attention as people ask, “Why?”

Most shocking for me was that the Sikh Temple is just a couple of miles from my home. I  drive past it on my way to the grocery store each week. I noticed when the temple was first built five years ago and wondered just what a Sikh Temple was. Now I know that it’s the place of worship for a 500-year-old East Indian religion whose premise is devotion and remembrance of God at all times, truthful living, and equality of mankind. What had they done to deserve being the target of a mass shooting?

That’s not all. A few hours after the shooting, police officers, fire fighters, and paramedics from surrounding cities converged on a duplex in Cudahy, Wis., six miles from the Sikh Temple. Before long, the FBI rolled in with tactical units, armored vehicles, and other specialists and equipment. They cordoned off Holmes Avenue and evacuated the residents. They’d found something related to the shooting, something major and, apparently, quite dangerous. The duplex in question is just eight blocks from my home and near a business district that I frequent often.

Not long after the news broke, I received calls and messages from friends worried that our family was safe. Yes, we were perfectly safe, but fairly unsettled. I was horrified and grieved by the Aurora, Colorado incident, but that was Colorado, and it was far away. This time, the mass shooting wasn’t in another state, it was practically in my back yard, and it’s had a very different effect on me. Mass shootings aren’t somebody else’s problem anymore, they’re my problem now.

The news media images of frantic, crying, members of the Sikh Temple – men, women, and children – linger in my brain. I still hear the anguished voices of victims interviewed after the incident. I still shudder when I think about SWAT teams and tactical units racing to the rescue. I can feel the Sikh congregation’s pain, yet what I feel can only be a minute fraction of the pain they feel. These are people I’ve likely passed on the street or bumped into in the grocery store. They share my community. They’ve been trying to raise their families to be God-fearing people just as I’ve been trying to raise mine.

That fact that the Sikh Temple shooting occurred in my community is a reminder to me – and I hope to us all – that such horrific calamities can happen anywhere, and at any time. It’s also a reminder that we have to be vigilant against the evil one, since these incidents can have only evil at their roots. Because of that, the Our Father has taken on new meaning for me.

…lead us not into temptation, but deliver us from evil.

Here’s what I’ve learned from the Sikh Temple shooting: We cannot walk in fear, but at the same time, we cannot walk in ignorance. We can’t cower in our basements and allow the threat of evil to stop us from fulfilling God’s plan for our lives. On the other hand, we can’t act recklessly and pretend it’s not there. In Matthew’s Gospel, our Lord tells us,“Behold, I am sending you like sheep in the midst of wolves; so be shrewd as serpents and simple as doves.” (Mt. 10:16)

Am I afraid to be living in Cudahy now? Not really, although I admit I’m a wee bit nervous after realizing that something like this could go on right under my nose. Will I avoid the areas involved in the shooting? No, although I’ll probably get a bit queasy driving past the first couple of times. You can bet I’ll send up a few Our Fathers, though, for the victims, for the community, for my family, and so that such barbarity may never happen again – in anyone’s backyard.