Trending Now
You are at:Home»Featured»What Letterman Should Say
By Bill Donohue on August 22, 2011 Featured, On Media 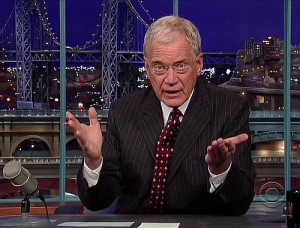 After receiving a threat from al Qaeda for making fun of Muslim terrorists on the “Late Show,” David Letterman has gone mum. Catholic League president Bill Donohue recommends he issue the following statement immediately:
Though I never mentioned Muslims or Islam in my June 8 monologue, I received a serious death threat from al Qaeda. This has forced me to reconsider the propriety of my humor about religion.
I have come to the conclusion that it is wrong to smear an entire religion and its clergy, which is why I am going to stop bashing Catholic priests. For too many years, I have taken wild swipes at priests, generalizing from the particular to the collective. I don’t do this to any other demographic group, and I shouldn’t do this to Catholic priests, either. Just because Catholics don’t threaten to cut off my tongue, break my neck, or put a hit on me, doesn’t mean I shouldn’t respect their religion. Ethics alone demands they be treated like, say, Muslims.
Donohue adds: “Bad as Letterman has been, he is positively saintly compared to Jay Leno. It would be great if both men, especially Leno, took this opportunity to stop with their sweeping generalizations about Catholic priests. It shouldn’t take a death threat to bring them to their senses—it should simply take common decency.”
Share. Twitter Facebook Google+ Pinterest LinkedIn Tumblr Email
Previous ArticleReflections for Sunday, August 28, 2011
Next Article Libya and the Doctrine of Justifiable Rebellion