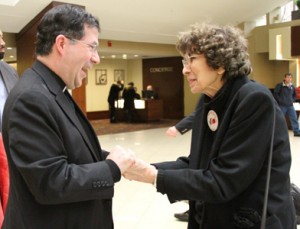 Fr. Pavone and Nellie Gray at the 2012 March for Life

News reached our prolife movement this week that Nellie Gray, who founded and led the annual March for Life, has died.

What motivated Nellie Gray to be so passionate, so focused, about ending abortion?

Nellie served as a corporal in the Women’s Army Corps (WAC) during World War II. As she did her desk job each day, she thought about the soldiers who — instead of being at that desk — had been sent out to save human lives. She didn’t know whether they had even given their own lives for that cause.

The reality of the holocaust made a profound impression upon her, as did the Nuremburg Trials, to which she often referred in explaining her pro-life position. At issue for her were not the numbers of people killed, vast and disturbing as those statistics are.

For Nellie, the horror was that a single human life had been intentionally taken. That was the point at which government transgressed its proper authority. That was the evil that had to be stopped.

Having retired from the service, she began to learn more about the tragedy of abortion. The entire lesson of the holocaust and the Nuremburg Trials informed her response to this American holocaust. To stop the intentional killing of a single baby was enough justification for all the effort of the entire movement called “pro-life.”

Nellie did not like the term “unborn.” She said that it wasn’t clear enough as to whether it referred to the baby before or after abortion. It was too negative. So she began using the term “preborn” to refer to the child in the womb. And she referred to herself as “One Note Nellie,” sounding the note of “no exceptions, no compromise.” No government, no human authority, can authorize even a single abortion.

This is why Nellie could not tolerate any of the “exception clauses” in pro-life legislation. She understood the need to save as many lives as possible in any situation. But she held that as soon as the government says that life is to be protected “except in this case and except in that,” those exceptions were an unjustified attempt to authorize killing. Such attempts, moreover, did not “legalize” abortion, according to Nellie. They simple “decriminalized” it.

Abortion, furthermore, wasn’t an abstract issue for her. She was a lawyer and understood the conceptual battles surrounding the controversy. But in her Annual Report, the publication issued each year on the occasion of the March for Life, she showed the reality of what abortion looks like. She often mentioned the need for people to see exactly what it looked like.

She also believed that America needed to hear the voices of the women harmed by abortion. That is why she had on the platform of the March for Life rally the women of the Silent No More Awareness Campaign, and allowed them to walk at the  front of the March with their signs, “I Regret My Abortion” — and the men with the signs “I Regret Lost Fatherhood.”

Just as often as any of these themes, however, Nellie longed for and called for unity in the pro-life movement. And that unity was always to be based on the truth — the simple truth that every child is a person from fertilization onward, and that no power on earth can authorize his or her destruction.