Trending Now
You are at:Home»Columnists»What Pope Francis Will Do
By Russell Shaw on March 27, 2013 Columnists, Featured, Leadership 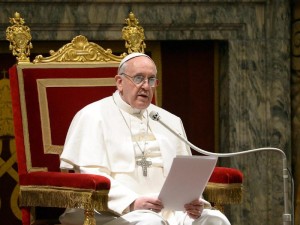 The surprising election of Pope Francis plainly was no surprise to the people who really counted: the cardinals, that is, who swiftly chose him on the first full day and fifth ballot of the conclave. While not a speed record, the timing showed the electors had no difficulty agreeing that the Archbishop of Buenos Aires was the man for the job.

Here was a grievous blow to punditry. In retrospect, it should have been obvious that Cardinal Bergoglio, a top contender in the conclave of 2005, might well be chosen Pope Benedict XVI’s successor. Although some thought that at 76 his age was against him, many cardinals are men in their 70s who may not see the age question quite that way.

Despite the favorable omens, however, he showed up on few pre-conclave pundit lists. The best explanation is that journalists don’t think like cardinals–and vice versa of course, which arguably is a good thing for both groups.

Now that he’s been elected, what will he do? We are told Pope Francis will be a “pope of the poor.” No doubt, but what does that mean?

Within the limits of his new position, he will remain a man of simple lifestyle. Furthermore, every pope since at least Blessed John XXIII has actively championed the cause of the oppressed, and Francis will be no exception. Will he criticize the libertarian economics of the capitalist West, including the United States, as Pope John XXIII, Pope Paul VI, Pope John Paul II, and Pope Benedict XVI all did?  And if he does, will Americans who’ve been saying “Isn’t that nice?” about his lifestyle shut their ears to his message? How many will adopt a simple lifestyle themselves?

Blessed John Paul II did pope-watchers a favor by setting out the agenda of his pontificate in considerable detail in his first encyclical, Redemptor Hominis, which appeared in March 1979 only five months after his election the previous October. Thereafter he thereafter largely followed its plan. Absent something like that from Francis, it’s best to leave the punditry aside for a while and simply watch what our new Pope says–and, especially, does.

Personnel choices will be of prime importance in the early going. Beyond the staffing of his own household, the first and most important of these is likely to be for the position of Secretary of State, the Vatican official with the crucial task of overseeing the operations of the Roman Curia.

It would come as a great surprise if Pope Francis chose to retain Cardinal Tarcisio Bertone in the job. But will he step outside curial ranks to find a successor–and if so, who will it be? Whoever it is, the choice will have a powerful impact upon the much-discussed issue of Curia reform.

No less an open question is what approach Francis will take to the Society of Jesus. The election of the first Jesuit pope was greeted with consternation by some conservatives who view Jesuits with alarm. But it’s entirely possible that as a Jesuit himself, Francis will have a better understanding of conditions in the Society than an outsider would have and will be better able to address the situation. Here too we can only wait and see what he does.

The current honeymoon phase will pass quickly. The Pope’s opposition to same-sex marriage and abortion will bring criticism from gay rights and pro-choice groups, and the media will line up with them. To belabor the obvious: the story of this pontificate has just begun.