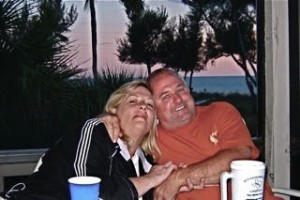 Beth stared out the hospital blinds as the sunrise crept through. The beauty of it did not register with her as her thoughts raced, wondering how her husband was doing, and how long it would be until things were back to normal. Finally, the doctor came in. “Please step out into the hallway with me,” he said.

At last we’ll get some answers and figure out what we need to do to get through this, Beth thought. She stepped out and the nurse that was with her followed. The doctor’s thick Kenyan accent made him difficult to understand. Without emotion, as if it were a trivial matter, the doctor said, “You’re husband has six months to live.”

The words made no sense. Beth repeated them in her mind. There must be a mistake. “Sorry, I don’t understand?”

The doctor became agitated, “Your husband has six months to live, okay?”

He must be lying, she thought. A sickening aversion came over her, not just to the doctor’s words, but to the man himself. She asked again for clarification and the doctor raised his voice this time. “You’re husband has six months to live, end of story.”

But that was not the end of the story. Instead, it was the beginning of a saga. Robert’s heart and liver were failing. It seemed that the fairy-tale God had given them would soon be over.

Beth met her husband Robert later in life, at a time when she thought finding true love had passed her by. Too much of her life had been wasted on wrong turns and wasted energy. Although she did not want to end up alone, she accepted that might be the case for her. Then, it seemed that God led her to Robert — in an AOL chat room, of all places.

A long distance relationship led to a courtship and finally marriage—“the best day of our lives,” they both agreed. Beth could not love Robert more and never tired of thanking God for him. Robert was a true Southern gentleman who made Beth feel like a fairy tale princess. Together they built a life of love and also learned how to live through loss when Peanut, who would have been their first born, was recalled by the angels.

Now, eleven years after the marriage that united them as one, a terminal diagnosis seemed poised to tear them apart. This cannot be happening Beth told herself again and again.

She believed that by decidedly putting her life in God’s hands, he had led her to husband. But with Robert’s terminal diagnosis, their beautiful life together seemed to be at an end.

While most healthcare workers in the system were warm, open, and kind, the system itself moved at a snail’s pace for them. “When are you going to get that liver biopsy?” One doctor kept asking. “Whenever your nurse schedules it for me!” Beth replied in frustration.

Diagnosis led to diagnosis. As the process unfolded, Beth came to realize that her only hope to save Robert was for her to become a part of the process. She began asking more questions and insisting on second and third opinions rather than passively standing by and waiting. Beth had to fight for her husband and learn how to advocate for him.

Finally, they arrived at a diagnosis: hemochromatosis, a genetic condition which caused iron to build up in Robert’s system. His only chance for survival was to have a heart and liver transplant simultaneously. Such a dual operation had never been done before due to the unlikelihood for success.

Beth trusted God, or at least she tried. But why, God, she wondered. Why are you letting this happen? It did not make sense to her that God would bring Robert into her life only to take him away.

These are questions she kept asking, and her answer from God always seemed the same, a feeling that he was telling her: “Have faith.” So she put her faith in God and prayed that his will would be done.

There were times, though, when it became a struggle just to put on shoes in the morning. When it was time to put down a faithful, but very old dog, Zip, Beth’s heart broke to overhear Robert whisper to her: “I’ll be seeing you again soon enough.”

The sufferings of our daily lives can lead us to want to stand on a mountain atop the world and shout, “WHY!?” As human beings, we are only privy to our present and past from our individual perspective. We don’t ever see the whole plan.

A child might ask the same “WHY!?” of God when he is told by his parents that he cannot have ice cream for breakfast. It’s not that the parent is being mean or cruel, but that the parent has another plan, a plan called health.

God’s plan is for us to be happy, and to be who we need to be. He does not just have a plan for us, he uses us as agents to carry out a vaster plan.

After two years of doing everything Western medicine could do for Robert, after months waiting for a heart and liver transplant, it seemed that God’s plan really was for Robert to die. Beth felt a dread at the bottom of her stomach. She wasn’t ready to live without Robert. “Please God,” she prayed, “I’m not ready to be alone.”

“Promise me something,” Robert told her when it seemed bleak, “Don’t let me die in the hospital.” Beth promised, and soon she was driving from their ranch in Junction, Texas to the hospital to pick up Robert. She would take him home to die.

“He’s too weak,” the doctor said when Beth told him she was going to be discharging Robert the next day. “He’ll never make it all the way to Junction.”

The drive into the hospital was one ongoing, “Please!” to God. Beth knew that this was the end, but still she prayed and prayed and prayed. She had resigned herself to God’s will. Yet, she was certain this was not how it ended because she could make no sense of why He brought Robert into her life for it to just end like this.

Then Beth’s cell phone rang. It was a nurse from the hospital. “I think we’ve found a donor,” she said. “It’s a little bit complicated but just . . . just come here.”

“I’m on my way,” Beth said, feeling her foot sink on the accelerator. They had found a donor, and Robert was rushed into surgery. He emerged weak and frail, and had a long road to recovery in front of him, but Beth had finally been given her answer to the her own going question, “Why God, why are you putting me through this?” Beth believes that God put her through this so that she could help spread an important lesson to others.

If Robert and Beth had listened to what the first, and the second, and many other doctors had said to them, Robert would have died without them ever knowing that the first doctor to diagnose him had been wrong. Doctors are extremely educated guessers. They have much more knowledge than we do in being able to diagnose illness, but they are not infallible. They make mistakes like the rest of us.

In our current healthcare system the average doctor only spends fifteen minutes with a patient. A patient spends his whole life with himself, a loved one spends most hours of the day with a patient. Beth has finished an as-yet unpublished book, Junction, on her story and her message of what a person can do to be their own advocate in the face of a medical crisis.

If you are reading this, then Beth believes it is part of God’s plan that you hear this message.

She gives the following advice for how to spend time with a loved one who is unconscious. “Just talk to them,” she says. “They can hear you. Keep your voice calm and reassuring. Don’t tell them to wake up and cry that you need them. Tell them they are doing marvelous, looking good and just stay strong. Talk about the the future and what you are doing.”

When Robert woke up said he could hear Beth sometimes though he could not recall what she said. But her voice was reassuring.

Remember the vitals, Beth tells advocates. If your loved one is in a coma or intubated their vitals will tell you how they are doing: blood pressure stable, they are stable.

You cannot be a passive part of the healing process. You cannot wait for some doctor to fix you. You have to be your own advocate in healthcare.

The doctors are there to work with you. Educate yourself. Ask second and third opinions. This could save your life or the life of a loved one who needs you to advocate.

There is the commonly used saying that “God helps those who helps themselves.” We have to be active for God’s grace to help us. In advocating for a cure, we help ourselves and God helps us too.

Health problems and the health care system can be intimidating, but it is during these times when it is most important to pray for inner strength in order to be up to whatever challenges must be overcome. As Beth knows so well, this is often exactly what’s needed to save the life of someone you love.

Luke Maguire Armstrong (LukeSpartacus.com) was a baby, who became a boy, who became a man. Once he fought a bear and almost died. Haters later claimed it was “only a raccoon” and he was “acting like a little girl.” Between 2008-2012 Luke directed the educational development NGO Nuestros Ahijados in Guatemala. This work was featured on ABC news 20/20 with Christiane Amanpour and in The Huffington Post. He is the author of How We Are Human and iPoems for the Dolphins to Click Home About. Visit him at LukeSpartacus.com and follow him @LukeSpartacus.