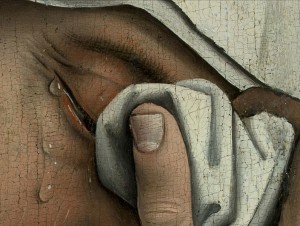 Have you ever heard the saying “You can’t give what you don’t have?”  It makes sense doesn’t it?  I can’t give you a dollar if I don’t have a dollar right? But in terms of affection, love and relationships it makes even more sense.

If your father was not affectionate, you may have trouble showing affection to your own children.  If your father never played ball with you, you probably did not know how to play ball very well.  If your father did not have the resources to draw upon to be the father you deserved, then it may be true that you also have limited resources.

I was recently shopping at our local grocery store and encountered a scene that drove this concept home.  Behind me in line was a father with his young daughter.  Although I could not hear all of the words, the tone was unmistakable and brought tears to my eyes.  Through clenched teeth and an almost guttural voice, he snarled at the young girl who was about 4 or 5 years old.  The sound was a snake like hiss seared with venom to ensure that she would not touch anything on the shelves next to him.  She cried and rubbed her eyes quietly whimpering next to him. I noticed how she continued to reach up for his fingers which were dangling at his side as she sloped her body against his leg.  Each time her little fingers touched his own, he recoiled as if she were toxic to him and would jerk himself away from her.  He pointed his finger at her in a stabbing motion chastising her for it.

The girl fell to her knees and although she was not openly crying, she was doing that thing when you try to stop crying, like a sucking in every couple of seconds through the nose, a whimpering that  seemed to strangely connect to my own diaphragm and I felt it so deep within my own body it made me think of my own Father wounds and having had a step-father who abused me, I have many.

According to the CDC, 1 in 4 girls and 1 in 6 boys will be sexually abused before they reach the age of 18.  But many more of us have wounds, even those of us who were not sexually abused.  There are so many places our own parents could have been wounded which formed the person they became is it no wonder then that they could not give us what we deserved because having never received it themselves, they have no idea how to give it to anyone else.

Thanks to my growing awareness of this fact as well as my continued understanding of what Divine Mercy is, I have realized that my step-father must have had the most horrible childhood.  Raised by a mother who not only abandoned him, but also a mother who subjected him to things I will not mention here, this poor little boy, was given nothing to teach him about his value, his worth being made in the image and likeness of God.  He never heard how his gifts and talents could change the world.  He was never loved for just being himself.  Instead, he grew up devoid of affection and the affection he did witness before she finally abandoned him all together was pornographic.

For me, the anger, hurt and hate melted away a long time ago.  As a mother of 3 boys, I have become acutely aware of how boys not only adore their mothers but they often times say they want to marry their mothers.  So my step-father was stripped from the love his little soul needed as nourishment and instead his soul starved.  Many people in our world are starving to death while their bodies grow fat.  It is any wonder then that this man who would be my step-father had nothing to give me but instead sought to take instead.  Until the wound is addressed, it will continue to fester and poison and ultimately lead to spiritual death.

So this year, I wrote a letter to my step-father.  I told him all these things and from my mother heart, I shared how he had deserved to be loved and cherished by his mother.  I apologized, yes, apologized for the women in his life who had hurt him and told him that he was made in the image and likeness of God and that he did nothing to deserve this God given dignity, but that it was a gift from God who loved him beyond measure.

I then forgave him for all the wrongs that he had done, telling him that I understood how you cannot give what you do not receive.  I told him that my motivation in doing this was his salvation, that I did not want him to go through life thinking that someone like him did not deserve to be loved by God because if he did, he would lose his soul.  The devil is clever.  He can keep us from going to church and asking forgiveness by convincing us that God is too good and does not “like” sinners as bad as us.

I then told this man who was my step-father from age 4 to 14, that he must believe that God loves him and desires union and communion with him because I would be the one person who had every right to suggest otherwise.  If I was saying it, I told him, then he must consider the fact that it is true.

I did not want the enemy using me as a reason to keep this man’s soul from God.  As far as I was concerned, I was going to allow God to use my mercy as a conduit of grace.

A few weeks ago I was at my brother’s house.  His father, my step-father, stopped by to talk to him.  When he was at the door, he saw me inside and asked if he could speak to me outside.  His voice was all humility and gentleness.  I had not talked with my step-father for over 25 years.  I was scared, but I went out to speak to him.  He thanked me for the letter and for the first time in over two decades, I was given an apology for what he had done.  He was so thankful, so grateful, that when he walked away, he looked taller somehow.

This Father’s Day, I pray that all of us can contemplate upon our own Father wounds and pray for healing.  Many people struggle with the obstacle of Father wounds in their own relationship with God.  If you are seeking healing in this area, please read my article “Healing the Whole Person” or listen to my Radio Show during the month of July where I will be focusing on wounds and healing all month with my guests from the Theology of The Body Healing Center.

Not all will be ready to do what I did; in fact the only thing I am sure of is that this was something I was called to do and by no means is it a template for others.  That is between God and them.  There is one thing that I do desire for this Father’s Day and that is that we realize that we cannot give what we don’t have.  That means we must be compassionate towards those who failed us and heal our own wounds so that we can trust in God and so that we have something to give to our own children.

In fact, there are some fathers who no matter how much you try to love them will only use that opportunity to inflict more pain on you because of their great woundedness. There are some fathers that no matter how many times you try to have a relationship with him, he will continue to reject you. Whatever your circumstance is, just invite God in and pray about what if anything you are being called to do before acting or you may be in for more pain.

Caryll Houselander wrote in “The Reed of God” that we are all vessels, formed in a unique way by God.  Some of us are  a reed, hallowed out with a knife with holes cut into it, some of us are a chalice, pounded with hammer and held to the fire that forms our shape, some of us are like a birds nest, our shape, our “emptiness” she calls it, made by the tender breast of the mother bird.  Whatever our shape, our emptiness becomes the vessel that God desires to fill and pour out from.  The reed, when the breath of God blows through it, creates a song for all to hear.  I, for one, am not a nest, but whatever I am, I pray that God fills me so I can spill out onto those around me.  Happy Fathers Day!