Trending Now
You are at:Home»Featured»Where is John the Baptist When You Need Him?
By Robert J. Gieb on December 15, 2011 Featured, Vocations 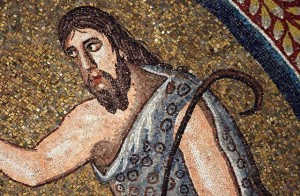 During the season of Advent the readings at Mass include passages about John the Baptist, the humble inhabitant of the Judean desert who possessed nothing but the truth and owed no one but the God who created him.  He was fearless in his preaching. He discomfited all in their complacency, but to all he gave hope with the promise of the Savior to come. Ultimately his commitment to the truth — telling Herod that his incestuous marriage to his brother’s wife was morally repugnant — got him killed.

We in the United States and the west are fortunate that we are not usually be imprisoned or killed because we proclaim the truth, even if the message is unwanted by the government or by our fellow citizens. But we should not delude ourselves into thinking that there are not those among us who want to silence the truth even by force, and who are working hard to rid America of even the most timid voices of faith, much less the bold preaching of a John the Baptist.

Catholic social service agencies are under constant pressure from government officials to participate in the adoption of children in their care by homosexual couples. Catholic institutions are being threatened with legal actions if they do not provide their employees with insurance benefits for contraception. State and local governments have engaged in legal attacks on pro life counseling centers for years. State and federal courts have been at the forefront of the promotion of abortion, and there is a long history of judicial restraint of the constitutional rights of pro life workers. Local police in too many jurisdictions, including even campus police at Notre Dame and other Catholic universities, have made it a practice to harass and to deny the constitutional rights of Catholics and others in the pro life apostolate, and virtually dare them to oppose their illegal actions.

A few weeks ago I was harassed by three local police officers who had been called out on a totally false allegation by employees at a local abortuary claiming that pro life counselors had blocked their driveway. These belligerent police officers had no respect for the constitution, which was bad enough. But what was more disconcerting was that they seemed so comfortable in their misconduct. In part they felt “allowed” to harass Catholic pro life workers. Why?

If law enforcement officers, or federal, state and local bureaucrats, are belligerent and unprofessional in their conduct involving pro life workers and the Church it is because their superiors permit it, and their superiors permit it because the elected officials to whom they answer permit it.  Elected officials permit it because there are few if any consequences for their actions-at the polls or in their churches. Catholics are not a moral force which they take seriously, in part because of the priest sex scandals, but more importantly because Catholics are not consistently serious about life issues nor truly unified in their pro life efforts. Evil thrives on divided believers. So many individual Catholics and even Catholic clergy and religious in this country have talked pro life and then voted pro death and collaborated with the abortion promoters so many times that we have dissipated and wasted our moral voice, and left unfulfilled the power of our unity.

In the city where I live two members of the city council are practicing Catholics. Both are Democrats; both support the pro death candidates and policies of their party. Neither of them has ever shown any leadership or support in pro life matters. The former county Democratic Party chairman is a practicing Catholic who publicly favors legal abortion, and works diligently to elect as many pro abort candidates as possible. He is a lawyer who a number of years ago worked feverishly on a court case to close down the local pro life center. My radically pro abort state senator is not Catholic, but her campaign treasurer, who took time to campaign for her, is a prominent official of a major office of the United States Catholic Conference.

The pro-abortion credentials of prominent Catholic politicians and officials such as Ted Kennedy, Joe Biden, Nancy Pelosi, Dick Durbin, and Kathleen Sebelelius are well known. The pro-abortion decisions of Justice Anthony Kennedy and the late Justice William Brennan are equally known (including the fact that Brennan helped to write the opinion in Roe v. Wade). State and local governments are filled with hundreds Catholic pro-abort politicians who actively promote legislation and the expenditure of public money to promote and expand abortion and contraception, as well as same-sex marriage.

Barack Obama did not win the presidency without millions of Catholic votes. He is not now promoting abortion, and attacking the Church through regulations issued from the Department of Health and Human Services in the face of  fierce moral objections and fervent pleas for justice of his Catholic secretary of HHS. The president’s abortion promoting health care law did not pass in spite of the unified resistance of Catholic Democrats in Congress or after determined opposition from the Catholic Hospital Association.

Faithful Catholics have met the enemy, and it is our fellow Catholics.

It is time that we admit that we have one Master, and that He demands protection of life and marriage. If we follow Him we cannot align ourselves with those who support abortion, euthanasia, same -sex marriage, or any of the other social poisons which attack human dignity and the integrity of our social compact. Those Catholics, for political and financial purposes or for whatever reasons, who do align themselves with the enemies of life and marriage must be called out and given the same opportunity which the Church has given to its public sinners for centuries: Repent, or be separated until you do.

The Church is a house of sinners whom it loves and seeks in charity to convert. But it is not a house of sin, and it cannot condone the sins of its members, especially the scandalous public sins against marriage and against life itself. It does not and cannot conduct itself as if it is acceptable for the powerful to kill the weak or for the promiscuous to rebel against natural law and marriage. The Church, its leaders and members, cannot stand on the street corner and announce the teachings of the Master of all life, and then wink and nod and look the other way when members of the Catholic flock publicly support the killing of innocent children, the euthanizing of the infirm, and the destruction of marriage and family.

The Catholic Church in America has without a doubt been a constant and many times the lone voice for life since Roe v. Wade, and has backed up that voice with actions, many significant. But the legal, political, and social landscape indicates that it is failing on life and marriage issues. Ironically this failure is occurring at a time of Catholic ascendancy in America history when Catholics hold significant positions of leadership in government and public life throughout the United States.

With five members on the Supreme Court, hundreds holding seats in the Congress, with thousands more holding seats in state legislatures and city councils, and with millions of educated Catholic voters, the message of the Church about the dignity of life should be an integral part of national political discussions. Attempts by both secularists and dissenting Catholics to destroy life and marriage should have been met early, decisively, and consistently by Catholic voters, lawmakers, and judges. Sadly that has not happened because a large number of Catholic voters, lawmakers, and judges number themselves among the enemies of life and marriage.

If the Church in the United States over the years has launched sincere pro life initiatives and actions — and it has — it has simultaneously chosen to overlook the extensive Catholic collaboration with the culture of death that undermines those same initiatives and actions. The Church’s old ties to the Democratic Party have been hard to sunder, and it remains in many ways still tethered to the donkey. The leadership of the Church in this country (with some notable exceptions!) has seemed incapable of understanding that if you preach life and human dignity, and then bury the Justice Williams Brennans and the Senator Ted Kennedys with full church honors in the presence of an abundance of red and purple robes, allow the Fr. Robert Drinans to hold elective office and to vote for abortion expanding legislation, even for partial birth abortion, and honor the Speaker Pelosis as pillars of the faith, with little to no serious official condemnation of the evil that they do, the personal credibility of the hierarchy and that of the Church is seriously damaged. And that has real consequences, from belligerent police officers who abuse Catholic pro life witnesses on the sidewalks in front of abortuaries and on the campuses of Catholic universities, to over 50,000,000 aborted babies, and the alarming increase in both euthanasia and counterfeit marriage between persons of the same sex.

Here is the good news: We have many John the Baptists in the Church in America who consistently put their lives and reputations on the line for the protection of life and marriage.

But the question is whether the leadership of the Church in the United States and individual Catholics will finally stand in unity with these brave people, much like the Catholics of Poland stood in solidarity for human dignity in the face of atheist Communism? Or will they wink and nod, and toast Herod’s new wife?