Trending Now
You are at:Home»Columnists»Who is to Blame for Koran Burning Protest Deaths?
By Daniel Pipes on April 6, 2011 Columnists, Featured, Law & Justice 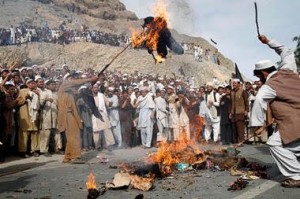 When Pastor Terry Jones, 59, announced an intent to burn a Koran on the anniversary of 9/11 in 2010, the U.S. government, fearing attacks on American troops abroad, put intense pressure on him to desist and eventually he called off his plans.

Jones, however, did not cancel the ceremonial judgment of the Islamic scripture – he only delayed it by six months. On March 20, in a six-hour ceremony called “International Judge the Koran Day,” Jones convened a mock-judicial process in Florida that deemed the book “guilty of crimes against humanity,” then set a copy on fire.

The event was intentionally ignored in the United States, in the hopes of limiting its impact, but little stays secret in the Internet age. Within two days, news of the conflagration had reached Pakistan and Afghanistan, where the country’s presidents roundly denounced Jones, bringing his action to wide notice. On April 1, infuriated Afghans lashed out, killing twelve in the northern city of Mazar-i-Sharif; the next day, suicide bombers dressed in women’s clothing attacked a coalition base in Kabul and street mobs in Kandahar again killed twelve.

(This, it bears observing, was just five more dead than in September 2010, when nineteen were killed as Jones only threatened to burn the Koran.)

Who is morally to blame for these deaths, Jones or Islamist intolerance?

Not surprisingly, Jones called the killings a “criminal action” and asserted that “We must hold these countries and people accountable for what they have done as well as for any excuses they may use to promote their terrorist activities.”

In contrast, Barack Obama characterized the Koran burning as “an act of extreme intolerance and bigotry” while calling the violent responses “dishonorable and deplorable.” Members of Congress overwhelmingly blamed Jones:

In light of this blame-Jones consensus among the elite, the replies to a poll sponsored by a left-wing U.K. newspaper, the Guardian, come as something of a surprise. Asked whether “the Florida pastor who burnt the Qur’an [is]morally responsible for the deaths of UN staff in protests in Afghanistan,” only 45 percent blame Jones and 55 percent blame the Islamists.

Indeed, some American Muslim leaders concurred with this sentiment. M. Zuhdi Jasser of the American Islamic Forum for Democracy in Arizona blamed the killings on extremist leaders who exploited the Koran burning as an excuse for violence. The imam of an Ahmadiyya mosque in California, Shamshad Nasir, said his community “rejects any killing in the name of religion anywhere, even if it is done in the name of the most sacred scriptures.”

As I wrote last September, when Jones threatened to burn a Koran, the “violence stems from Islamic law, the Sharia, which insists that Islam, and the Koran in particular, enjoy a privileged status.” That insistence, which has been asserted since 1989, when Ayatollah Khomeini put an edict on Salman Rushdie for his novel, The Satanic Verses, must not be indulged. Islam is one religion among others, with no claim to superior status. Indeed closing down the claim to Islamic supremacism may be the single greatest challenge to modernizing Islam.

However distasteful, Jones’ act is both legal and non-violent. He is not responsible for the 43 deaths; the repugnant, barbaric ideology of Islamism is to blame. When will U.S. politicians realize this basic fact and stand up robustly for the civil liberties of American citizens? Critiquing Islam, tastefully or distastefully done, is a Constitutional right. Indeed, done intelligently it is a civilizational imperative.