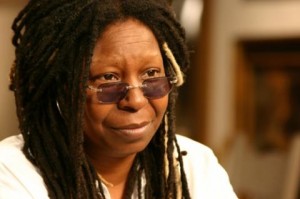 I don’t watch The View. I tried a few times, many moons ago; but found that even with the presence of conservative Elisabeth Hasslebeck, I couldn’t stomach the show.

But even her guest spot on The View couldn’t entice me to tune in. Appearing the same week as the presidential debates wherein Candy Crowley made it known, once and for all, that the media bias was real and palpable—as if anyone still needed that confirmation—by derailing Romney with an intentional, unacceptable interruption meant to save Obama with a preposterous spin on Benghazi, I just wasn’t up to one second of Whoopi Goldberg.

I’m no psychic but even I could have foretold what was going to happen. And I believe Ann Romney knew as well; and that is why I continue to admire this woman of courage and conviction.

As I write this little opinion piece, I desperately want to avoid using the phrase “war on women.” However, having read about Goldberg’s incredibly biased questions thrown at Ann Romney (versus the laughable way the cast of The View treated the Obamas who appeared right after our embassy was attacked and 4 Americans were left dead), I’m not sure if it is possible to avoid identifying that the real war on women comes from the likes of women such as Joy Behar and Whoopi Goldberg.

Add to the list Sandra Fluke (identified as an “American woman’s rights activist”—really?) and Kathleen Seblious, yet another wayward Catholic in an Obama administration.

Where is the outrage from these “activists” when the numbers of unemployment for women is made known and we hear that 800,000 more women are in poverty than when Obama took office?

Where is the outrage from these “activists” when we hear that poverty for Hispanic women is growing at a rate faster than any other group?

And the liberal Twitter universe goes ballistic when Romney—who has a proven record of hiring women—talks about the binder in which the resumes of countless women were made available to him so that he could fill his cabinet posts?

I’ve taken away two things from this week’s nauseating bias towards the Romneys: