Trending Now
You are at:Home»Featured»Why Call It Eucharist (Thanksgiving)?
By Shane Kapler on April 21, 2011 Featured, Live in Christ 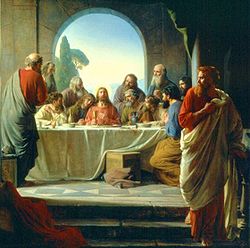 Jesus said to them, “I have earnestly desired to eat this Passover with you before I suffer”… And He took bread, and when He had given thanks He broke it and gave it to them, saying, “This is My Body which is given for you.”  And likewise the cup after supper, saying, “This cup which is poured out for you is the new covenant in my blood” (Luke 22:15, 19-20).

It is one of those realizations that leave you speechless.  There was something significantly more, qualitatively more, going on in Jesus’ prayer than the traditional, “Blessed are You, L-rd, our G-d, King of the universe, who brings forth bread from the earth” (Passover Haggadah, translated into English).  Jesus gave thanks to His Father for the True Bread, His Body, that would be broken for us.  He thanked the Father that He was able to offer Himself for our redemption! We see how difficult this was for Him when, just a few hours later, we glimpse Him in the Garden of Gethsemane; and yet, almost paradoxically, it was an offering He “earnestly desired” to make.

Historically at Calvary, and sacramentally at Jesus’ final Passover, we see our Lord living out as a man, Who He is from all eternity: the Son of the Father.  For it is the Son Who receives all He is from the Father and reciprocates by pouring out Himself to the Father, in the Person of the Spirit.  This is the same Trinitarian movement we see in the Cross/Eucharist — but with the Son’s humanity now fully caught up into His outpouring of Love.  The Son, Who has received all He is, “gives thanks,” by pouring Himself out in a return of Love. And because He does this as man, His action overwhelmingly atones for — and superabundantly redeems — all sin, man and woman’s rejection of God.

By calling what we Christians “do” Eucharist (the Greek word for “thanksgiving”), we make a profound statement.  We have been made sons and daughters in the only Son, and we enter into His Gift of Self to the Father.  Like Him, we who have received all we are from the Father, give ourselves back to Him in a movement of thanksgiving/Love — the Holy Spirit pouring forth from Jesus, and carrying us into the arms of the Father.  It only makes sense that the Eucharist, what the Church calls “the source and summit of the Christian life,” should be a manifestation of its central Mystery — God’s own Trinitarian Life.