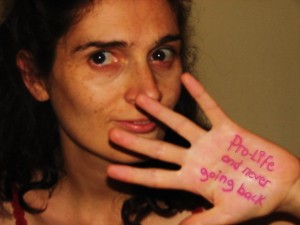 -Where I was ten years ago-

I told my future husband on a date in 2004: “My sister had half of her thyroid removed because she had parasitic cells growing on it. Was she wrong to have the surgery done so that she could live? Of course not and it’s the same with abortion.” I can’t believe I compared my aborted children to parasites to justify my choices. In my pro-choice mind, the evil of abortion (that I thought necessary), was taking away a part of the woman so that she could live. I was right about one thing: abortion takes away her heart but it doesn’t have to be that way.

-Should we ignore science?-

I can’t go back to being pro-choice now because of science. Regardless of people’s (or the contraception industry’s) opinion, human life begins atfertilization. People may believe what feels right to them but they can’t change the truth.

-Abortion is bad for women-

Angry pro-choice women sometimes insult and attack me (online) and yet I understand how they feel. It’s common to get involved in that movement to cope with one’s abortion. I can’t go back because abortion hurts us (read my testimony). It’s not just one person but thousands of women from different ages and walks of life.

Through Silent No More, recovery groups and social media, I came to know women from different religions and no religion who had legal and illegal abortions. Some were raped, many were coerced or forced to abort. I know women who had three, five or seven abortions, some who volunteered at abortion clinics. Many couldn’t have children afterwards. Some were struck by grief and guilt right after the abortion while it hit others after thirty years. We all have been through different stages of denial and we regret our abortions. I can’t go back because it’s the pro-life side that offers hope and healing after abortion.

There is also the fact that “access to legal” abortion doesn’t mean safe. See the Blackmun Wall for a list of women who died in legal abortion.

I can’t go back because Stacy Zallie and other women attempt (and sadly manage) to kill themselves after an abortion.

[from a presentation by Dr. Priscilla Coleman at the AUL conference ‘The Future of Roe’ in January 2013]

I can’t go back because I have heard my babies’ heartbeat in utero, I have seen them move on a screen and later felt them kick. I have seen and felt a separate person live inside of me. Women were designed by nature to nurture and love and abortion is unnatural and destructive.

-What kind of pro-choicer would I be today?-

Half-truths, lies and disconnection from reality are necessary to accept abortion. I can’t picture myself making “uterus, mine!” signs or chanting: “it’s not a baby until it’s born!” to distract people from what abortion is. I couldn’t support a 14 year old’s vulgar statements or make kids hold questionable signs.

There is nothing mysterious or complicated about what I do today and why I do it. I want to expose abortion for what it is, keep the dialogue open and help those who need healing. I support pregnancy care centers, am open to life and to adoption and we are building a home for unwed mothers in my town. It was started by a pro-life girl, Claire, when she was in sixth grade. I wonder what the pro-choice kids mentioned above will do to “further their cause”?

The pro-”choice” movement only promotes the choice to abort a child. It fights informed consent laws and laws to improve clinics’ safety. I find it misleading and oppressive. There is no “need” for abortion but there is a lucrative business and the eugenics mentality is alive. I will never go back because women deserve to be respected, to know all their options, to be supported when they find themselves pregnant and alone. Abortion is not simple or neutral and women shouldn’t be denied the right to know what they are getting into. All of us deserve to make choices we can live with.