Trending Now
You are at:Home»Learn & Live the Faith»Catechesis»Win a Bible Prize Package
By Patti Maguire Armstrong on March 12, 2013 Catechesis, Featured, On TV and Movies 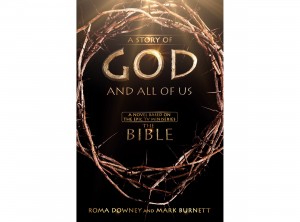 Some things come as a surprise and others do not. My family and I watched the first episode of The Bible, the History channel’s 5-part series, so it was no surprise to us that it premiered as the #1 cable telecast of the year and the #1 trend on Twitter.  It was spectacular; just the sort of thing to get a generation that is turned on by special effects, turned on by the Bible.

Naturally, we tuned in again for the second episode.  Again, it was spectacular. Really, you don’t want to miss this.  Roma Downey and Mark Burnett are executive producers of THE BIBLE miniseries. They are married to each other and were like-minded in getting people to turn on their TV’s to get turned on to The Bible.

“People of all denominations showed the power that can be unleashed in our culture when we band together,” said Roma. “The world is won when the church is one.”

The five-part BIBLE series was not only the most watched TV program of the night; the number grew every thirty minutes during the two-hour segment.

“This book is alive,” Burnett said. “People are talking more about the faithfulness and perseverance of Noah, Abraham and Moses than any time in recent history.”

Following the premiere, calls flooded in to Burnett’s One Three Media offices about the series. “The world is talking about the Bible,” said Scot Cru, Head of International at One Three Media. “People all across the globe are asking for the series to air in their countries. One Three Media will distribute this show to television stations around the world.”

The Rev. Samuel Rodriguez, president of the National Hispanic Christian Leadership Council, told the couple, “This is the beginning of something big.” “If this nation begins to re-engage God’s word,” he said, “it carries the potential for a new awakening.”

Pastor Rick Warren of Saddleback Church said of the series’ success, “We all know what good and faithful servants Roma and Mark have been in making this series.  And now the world is responding with overwhelming support.  God is at work!  One can only imagine what the ratings will be when the real star of the show appears onscreen.”  (Jesus, played by Portuguese actor Diogo Morgado, makes his first significant appearance in the series March 17.)

THE BIBLE Series has given us the opportunity to reward our readers with an amazing giveaway.  One lucky fan will win the following:

To enter, please leave a comment below by March 17th. The winner will be randomly chosen March 18th.

THE BIBLE series will air every Sunday until Easter on The History Channel (please check your local listings for time).  The three companion books are all available at your local Christian retail store or online at Amazon.com.