Trending Now
You are at:Home»Learn & Live the Faith»Catechesis»Witnessing in the Here and Now
By Genevieve Kineke on November 26, 2012 Catechesis, Featured, The Social Order 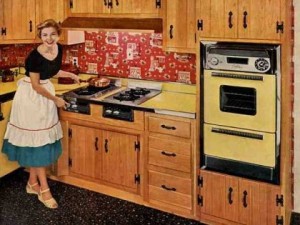 Having offered my initial response to the election of 2012, I promised a more positive column, and that promise is easy to fulfill—Christ is risen, and faith in him is stronger than death.

Although I missed living in the 1950’s by a hair’s breadth, that decades’s culture was long celebrated in movies, books, and music. Whatever may have lain in the hearts and minds of that generation, from a distance the prevailing word that comes to mind is “convention.” Skirt lengths, hair cuts, meal preparation, school discipline, and cultural tastes were widely chosen by convention, and those who didn’t conform (due to choice or poverty) felt the opprobrium of those around them. Even church attendance on Sunday was highly conventional, and the pews were filled on a regular basis.

Why were they there? It’s impossible to tell, and it’s probable that the motives were highly mixed—from person to person, and even within each heart. Which of us always does the right thing for the purest of motives?

Convention no longer drives us to Mass, or commands our choices. Quite the opposite. However much we may miss the Donna Reed culture, the Leave it to Beaver milieu, we are living in a post-Christian era whose members cannot even agree on what marriage is. Is it any wonder that there may be a sense of foreboding about what our children stand to inherit?

In his homily reflecting the 50th anniversary of the opening of the Second Vatican Council and the beginning of the Year of Faith, Pope Benedict said, “The Council did not formulate anything new in matters of faith, nor did it wish to replace what was ancient. Rather, it concerned itself with seeing that the same faith might continue to be lived in the present day, that it might remain a living faith in a world of change.”

The Holy Father warned against two errors, “anachronistic nostalgia and running too far ahead,”—both of which can tear us from Christ, who is the same, yesterday, today, and always. Is it possible that when many important virtues ran hand in hand with the popular culture, that people lost their sense of Christ, who is the measure of all things? Could it be that convention was embraced as a way of creating order and stability rather than as a means of acknowledging our need for constant renewal? Is it possible that Christian piety had become ossified and stale?

The recent election made clear that those human constructs—Christian or otherwise—are no longer welcome in this individualistic paradise. Human dignity, the sanctity of life, marital fidelity, and many normal expressions of virtue are scorned as anachronistic by those who have “run too far ahead.”

Is there anything positive in this? How can good come of it? First, it purifies our intentions—we must now do the right thing for the right reason, which is what mature Christians do. We must not be swept along with the mainstream, but stake a claim in a Church that is increasingly embattled. Secondly, it allows us to join myriad fellow Christians as martyrs—those called to witness as lamps amidst the creeping darkness, living lives of joy that springs from authentic faith. That means we choose to imitate Christ, not prevailing customs.

Surely, we weep over those who are shredded by the mounting sins, but that, too, will help focus our prayer lives on the One who has redeemed us. That One is not couched in law, or convention, or political discourse: He is God, who alone can save us from ourselves. Come, let us adore.