Trending Now
You are at:Home»Featured»Women, The Cosmos, and Cosmetics
By John Médaille on January 31, 2015 Featured, The Feminine Genius, The Social Order, Women 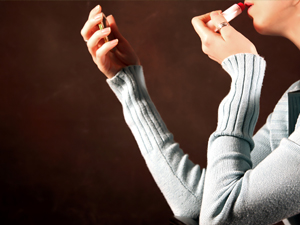 Any writer or speaker who offers his opinions on a topic does so with the implicit promise that he is an expert in the subject and can offer insight not generally available to the general public. But I am forced to take a different tack, since I am about to opine on a subject—two subjects, in fact—of which I am completely ignorant: women and cosmetics. It is not that I am unfamiliar with the topics. As the saying goes, “some of my best friends are women,” and with one in particular I have shared my life and my bed (okay, our bed) for the last 39 years. I even have children and grandchildren of the female persuasion. Yet I cannot claim—and no man can claim—that such long acquaintance has led to real enlightenment. Still, in the admission of absolute ignorance there is a kind of relative knowledge, which is about the best that men can hope to achieve.

My meditation on cosmetics begins with an incident from a book on quite a different topic: Ingrid Betancourt’s Even Silence Has an End, an account of her six years as a captive of the communist guerrillas in the jungles of Colombia. It so happened that before she was abducted, she visited a men’s and a women’s prison as part of her campaign for the presidency of Colombia. In the women’s prison, unlike the men’s, the inmates did their best to create a little microcosm of normal life. Their requests to Ingrid were for simple things, things that would help give them this feeling of normalcy, things like lipstick. Ingrid made some promises, which she promptly forgot. As a conventional liberal, she thought her real job was fighting for their rights and speeding their paperwork. But after a few years in her own hellish prison, she said, “How mistaken I was. It was the lipstick…that could have changed their lives. Now I understood.”

What is curious about this statement is that she offers no further explanation about the life-changing possibilities of lipstick. From this, I draw two conclusions. The first is that for the women reading this statement, no explanation is necessary, and for the men, no explanation is possible. And this leads to my second conclusion: any attempt to systematize human behavior and to place social order in neat and logical categories breaks apart when we come to the question of women.

For example, some think that all human action, all economics, politics, art, and religion can be explained in terms of a hedonic calculus of self-interest, and that to understand the laws of pleasure and pain is to understand all things. Now, if one confines the discussion to the the men one meets in the world, there is a certain plausibility to this argument, and this is especially true (it must be said) if I confine the discussion to the man I meet in the mirror. But when one speaks of women, the whole neat system begins to break apart.

Men may separate their pleasures from their pains and learn to trade one off against the other, but women may not. For the simple calculus of pleasure and pain cannot, for example, explain what a mother does in the normal course of her day as she attends to the care and education of her children.

Some think that women are bound to this task by mere biology, but what actually happens is far more mysterious. For as Hans Urs von Balthasar points out, all of human civilization depends on love at first sight, namely, that women, when presented with their newborn babies for the first time, will fall in love with them. Why they do this is difficult to understand. After all, this is not a good time for meeting new people and making new friends. Of course, I have no experience of the process, but I have witnessed it a number of times, and it seems to me that women are not at their best at these moments. In fact, they seem to be downright cranky.

Nevertheless, without this love at first sight, it would be unlikely that one would subject oneself to the task of caring for children. Oh yes, we all like to “oh” and “ah” over babies, but let’s face it: their conversation is not deep and their activities are limited. In fact, these activities seem to consist entirely of sucking, shitting, and crying, especially crying. Babies are the most demanding of creatures, giving no thought to the time of night and totally immune to any reasonable argument. With halfway decent parenting, most will learn to moderate their demands; the rest will grow up to be hedge-fund managers and politicians. Yet as difficult as this task is, enough women are willing to undertake it so that the race of men can continue for another season.

Of course this is not a task for women alone, but for men as well. But at this point, we face a problem, for men do not come to this task naturally. That is, for human males, nature does not dictate their role in fatherhood through instinct as it does for all other members of the animal kingdom. Further, men do not have the same natural relationship with their children that women do. At the time of birth, a mother has been intimate with her child for nine months, but fathers have to be introduced to their children. And they are always in the position of Falstaff, who (playing the role of Prince Hal’s father) says to the Prince, “That thou art my son I have partly thy mother’s word, partly my own opinion, but chiefly a villainous trick of thine eye and a foolish hanging of thy nether lip, that doth warrant me.” Shakespeare here is a realist, recognizing that men do trust faith and opinion, but mostly search their children’s faces for familiar features.

Therefore the behavior of men is not instinctive, but intentional, social, learned. Indeed, the proper socialization of men is one of the great tasks of any civilization, since men must be “feminized” to the extent that they see their sexual identity within the confines of marriage and the family. Since order in the human family is not instinctive but intentional, it must be created anew in each family and re-created every day.

Since the demands of children are so great and so prolonged, women must order the social order to their will, a will directed not so much to their own needs as to the needs of their children. They must create a little world, a micro-cosmos, that serves the needs of the family. But how are they to do this? Certainly not through strength alone, since the very act of having a child weakens a woman and increases her vulnerability. Nor through reason alone, since reason is not sufficient to motivate most men. Really, in order to create her little world, and through it the wider world, women have only two weapons: beauty, and nagging.

Of nagging, we will say nothing, if we are sensible. But by beauty, I mean something quite specific: I mean the cosmetic. We normally associate the word “cosmetic” with the superficial and the trivial, with mere appearances, but this would be to mistake the whole thing. For to understand the cosmetic, we need to look at its root word, cosmos. This word we often take to mean “everything” or “the universe,” but that is not correct. What the term meant to the Greeks was not “everything” but the harmonious composition of parts that produced a coherent and beautiful whole. This starts with the universe itself, in which everything is seen in its proper place, in its proper relationship to everything else, and therefore forms a beautiful whole. This cosmic beauty then extends down through each microcosm, each little part of the whole which displays its own order and beauty, and then right down to the little cosmos of a woman’s face. The need a woman has to order the world through beauty begins with the need to order her face.

From this habit of ordering herself (a habit which extends to women across all times and cultures) women move out to order the family. They take what resources they have, what gifts their men bring, what talents their children display, in what circumstances they find themselves, and try to compose all of these elements into an orderly whole. The habit of making up one’s face is practice for the task of making up the world.

Some will object that cosmetics are cheating, but this is not so (except in the extreme cases of cosmetic surgery and the like), for cosmetics will not make a plain woman into a great beauty, but they will reveal and highlight the beauty that is the birthright of every woman. Others might object that this is about appearances only, but appearances are all we have in the world. The cathedral is nothing but appearances, and we may judge whether the architect has truly captured the reality of the Church; the painting of the saint is just a bit of cosmetics on canvas, and we must discern the reality it depicts in its appearance. The bread of the Eucharist is just an appearance.

Of course, cosmetics have become a great industry, and like all in the endless search for increase, it quickly passes from the sublime to the absurd. The purpose of this industry is no longer to make women feel beautiful, but to make them feel insecure, to make them believe that there is always one more product they must buy, one more shade of red they must try, or they will be ugly. But this is a perversion which need not concern us here.