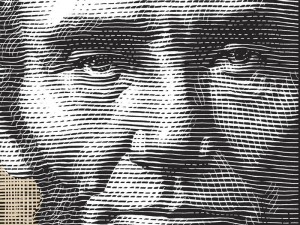 Would America’s 16th president be a 21st-century Democrat? Liberals, of course, answer… of course!

Let’s take a look at some of Lincoln’s ideas to see just how good a Democrat he’d make in 21st-century America.

First, here are some of Lincoln’s ideas on freedom and wealth, from four quotations; arranged in chronological order, two of these quotations are from speeches, another from a letter, and yet another from an unpublished manuscript.

In early 1860, Lincoln made a tour eastward, to make himself better known among people outside Illinois. This is from a Speech at New Haven, Connecticut, March 6, 1860:

I take it that it is best for all to leave each man free to acquire property as fast as he can. Some will get wealthy. I don’t believe in a law to prevent a man from getting rich; it would do more harm than good. So while we do not propose any war upon capital, we do wish to allow the humblest man an equal chance to get rich with everybody else.

What Democratic politician has said anything like that lately? Would any of them dare to say anything like that? Does it not sound much more like what a Republican or a Libertarian might say — and then get pilloried for having said it?

Mind you, Lincoln made those statements in the year he was elected president. And in a speech to make himself better known to a larger audience.

All this is not the result of accident. It has a philosophical cause. Without the Constitution and the Union, we could not have attained the result; but even these, are not the primary cause of our great prosperity. There is something back of these, entwining itself more closely about the human heart. That something, is the principle of “Liberty to all” — the principle that clears the path for all — gives hope to all — and, by consequence, enterprize, and industry to all.

Those thoughts, unpublished during Lincoln’s lifetime, found later expression in a speech, his first Annual Message to Congress, December 3, 1861:

The prudent, penniless beginner in the world, labors for wages awhile, saves a surplus with which to buy tools or land for himself; then labors on his own account another while, and at length hires another new beginner to help him. This is the just, and generous, and prosperous system, which opens the way to all — gives hope to all, and consequent energy, and progress, and improvement of condition to all. No men living are more worthy to be trusted than those who toil up from poverty — none less inclined to take, or touch, aught which they have not honestly earned. Let them beware of surrendering a political power which they already possess, and which, if surrendered, will surely be used to close the door of advancement against such as they, and to fix new disabilities and burdens upon them, till all of liberty shall be lost.

That was Pres. Lincoln’s first “State of the Union”, as we would call it today: it was a written message delivered to the Congress by his secretary John Hay. (No grandstanding political show, that.) Look at it again: the sitting president of the United States hailed economic freedom as the system that provides justice, generosity, and prosperity — affording hope, energy, progress, and improvement to all.

Any chance whatever that this evening’s State of the Union Address from Pres. Barack Obama, a Democrat, will exhibit a similar train of thought? And what kind of reaction do you think he would get from his fellow Democrats if it did?

That liberty and prosperity are intertwined is an idea that never left Lincoln. This is from a letter to a group that had made him an honorary member, Reply to New York Workingmen’s Democratic Republican Association, March 21, 1864:

The strongest bond of human sympathy, outside of the family relation, should be one uniting all working people, of all nations, and tongues, and kindreds. Nor should this lead to a war upon property, or the owners of property. Property is the fruit of labor — property is desirable — is a positive good in the world. That some should be rich, shows that others may become rich, and hence is just encouragement to industry and enterprize. Let not him who is houseless pull down the house of another; but let him labor diligently and build one for himself, thus by example assuring that his own shall be safe from violence when built.

What Democratic politician has said anything like that lately? Would any of them dare to say anything like that? Does it not sound much more like what a Republican or a Libertarian might say — and then get pilloried for having said it?

Abraham Lincoln was a keen observer of humanity. To help us further to determine how good a Democrat he’d be today, here are a couple of his observations. The first is from an unpublished manuscript; the second, from a speech.

The habits of our whole species fall into three great classes — useful labour, useless labour and idleness. Of these the first only is meritorious; and to it all the products of labour rightfully belong; but the two latter, while they exist, are heavy pensioners upon the first, robbing it of a large portion of it’s just rights. The only remedy for this is to, as far as possible, drive useless labour and idleness out of existence.

Which Democrat today would advocate driving useless labor and idleness out of existence? Indeed, which Republican or Libertarian would do that?

Lincoln gave more pointed expression to those ideas in an Address before the Wisconsin State Agricultural Society, Milwaukee, September 30, 1859:

No country can sustain, in idleness, more than a small percentage of its numbers. The great majority must labor at something productive.

Which of today’s Democrats would point that out? Which of them, indeed, would even think so?

Okay. Let’s pull a few of the key statements from all those quotations, and try to imagine them coming from Barack Obama, or Harry Reid, or Nancy Pelosi; or from Andrew Cuomo, or Jerry Brown, or Patrick Deval; or from Dianne Feinstein, or Al Franken, or Barbara Mikulski.

Seriously: any Democrat today who talked like that would be told to make an honest man of himself and become a Republican.

(These quotations, and others both familiar and unfamiliar, from the words of Abraham Lincoln are being presented on Facebook at Real Lincoln Quotes.)