Trending Now
You are at:Home»Featured»Yankees First Baseman Mark Teixeira on the Importance of Fatherhood
By Trent Beattie on June 16, 2013 Featured, Men, Parenting, Sports 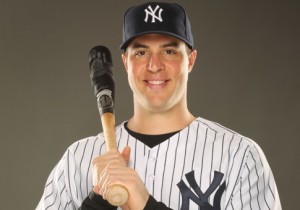 Mark Teixeira is widely known as one of the best all-around players in baseball. After being awarded the 2000 Dick Howser Trophy, college baseball’s equivalent of college football’s Heisman Trophy, he was taken in the first round of the Major League Baseball Draft in 2001.

Teixeira is also known for his generosity. He has established multiple scholarships, including one named after a friend who was killed in a car accident while in high school. Generosity is something he learned at the side of his father, John, along with a strong work ethic.

John Teixeira played baseball at the U.S. Naval Academy and passed along his own athletic knowledge and discipline to his son through the game.

Encouraged to use his abilities to their fullest, Mark Teixeira encountered his greatest coach and his greatest fan in his own father.

You’ve played for three other major-league teams, but is there something special about playing for the Yankees?

I played for the Texas Rangers, Atlanta Braves and Anaheim Angels before coming to New York. Each of those teams was great to play for, and you’re blessed to be able to play on any major-league team, but with the Yankees, it’s raised to another level.

It’s bigger and better here. So many fans, so much media attention, and such a history of success. Twenty-seven World Championships is quite an accomplishment, which makes the Yankees not only the greatest baseball franchise, but the greatest sports franchise, of all time.

You’re a three-time Silver Slugger Award winner, but also a four-time Golden Glove Award winner. Do you work on fielding as much as you do hitting?

Everyone likes to get hits, so batting practice is something enjoyable to participate in and to watch. When you get an award for offensive skills, like the Silver Slugger Award, that’s nice. Hitting the ball and scoring runs are fun and necessary parts of the game.

A lot of people really only care about offense, though, because it can be a spectacular show.

What is not usually as impressive, but can be just as important, is the defense. I do put a lot of effort into defense, so getting an award that recognizes that, like the Gold Glove Award, is nice as well.

For every aspect of the game, though, you can’t focus on results or awards. If you did that, you’d go crazy. There are so many games and so many plays in the season that lots of failure is inevitable along the way. You just have to put in the right amount of effort and remember to work from the inside out, doing what you are capable of doing, rather than grasping for things beyond your reach. Then let the results happen as they will.

That’s something you learned from your father while growing up, right?

My father taught me a lot about sports, and that was a key thing: just working as hard as you can, and then letting the results happen as they will. You’ll be rewarded in some way for the effort you put in, even if it’s not in the way you originally intended.

Some kids dream of playing a sport professionally, but when I was a kid, the ultimate goal in my mind was to play in college. I just had more of a one-step-at-a-time approach to it. Enjoy the little things along the way, and don’t get caught up in the noise around the game. That way, you really get to know the game itself, and enjoy the game for what it’s worth, rather than trying to seek approval from outside sources.

You did get approval from your father, though.

My father was my No. 1 coach and my No. 1 fan. Early on, in high school, he said he taught me everything he knew about baseball, so the coaching part is kind of over, but he remains my No. 1 fan. I talk with him almost every night, and we go over what happened in the game that day.

While he did cheer me on for as long as I can remember, he was more concerned about being my father first and my friend second. There was a lot of structure and discipline in the house: You don’t talk back to your parents; you don’t use foul language; you don’t drink or use drugs.

The discipline wasn’t just for the sake of discipline, though. There was a productive purpose.

You were expected to show respect to others and to yourself by using and developing your God-given talents. You can only do that through gratitude, purposeful action and self-denial. Cutting corners or being idle doesn’t make it happen. If I hadn’t been taught that or lived by that, I wouldn’t be where I am today.

I’m very fortunate to have the upbringing I did. It was a very balanced family life, and I think the structure made the affection more genuine.

My dad always took the time to be with me, even though he had a very busy schedule. He showed me affection, told me he loved me; and so, I just had a very secure upbringing. It was a childhood everyone would want to have.

Did your father’s conversion to the Catholic faith influence your own faith?

Even though my dad came from a nondenominational type of background, he would attend Mass every Sunday with my mom, my sister and me. So when he was confirmed with my sister, it wasn’t that much of a change in day-to-day life, really. He was essentially Catholic already, but then he had more of a formal, official entry into full communion with the Church.

He did influence my faith, but it was more of a steady influence, rather than one that changed sharply at a certain point.

My mother’s side of the family, which is Italian, also had an influence on my faith. Her older brother, my Uncle Chuck, is a priest, and he was the heart and soul of the family when I was growing up. He brought spiritual realities into everyday life in an energetic way.

Your mother comes from a family of eight kids. Did you learn to appreciate family early on?

Definitely. We had a large extended family, and family has always been important to me. I have three of my own kids now, two boys and a girl, and there’s nothing more important than being a parent. You’re blessed by God to be able to cooperate in the creation and upbringing of another human being with an immortal soul. There’s a tremendous joy, but also responsibility, in that reality.

I appreciate how the Church is so dedicated to that: to being pro-life and pro-family.

I love being a parent and am grateful for what I’ve learned from my own parents. As Pope Benedict has reminded us in his encyclical Deus Caritas Est, God is love.

Parents are called in a special way to share in the providential concern for their children that God has for all of us. When you think of a little child and how much he needs you, it reminds you of how much you need God, even as an adult. Children have a way of making you think of Providence and how the generations are connected.

I’m reminded of the continuity of life when I think of an important story within our family. My paternal grandfather was injured while working on a sugar plantation in British Guiana, a small country on the northern coast of South America. His condition was so serious that they flew him to New York for surgery at Columbia Hospital.

While there, he met a nurse whom he would later marry. My grandparents met through this unusual event almost 80 years ago.

Fast-forward to 2010. My grandfather died, and less than a week later, my second son was born at Columbia Hospital in New York, the very same place my grandparents met. As one soul was leaving this world, another was being born into it.

I know God orders all things well for my son and for his great-grandfather, and this was a unique reminder of that spiritual reality.

The reality of life and death hit home for you in high school when one of your close friends died in a car accident. How did that heighten your awareness of eternity?

When you learn things growing up, they often start on a theoretical level. You only have so much real-life experience, so you don’t always understand the importance of what’s being passed on. You take it on faith and maybe shelve it mentally until you actually come into contact with something it can be applied to.

When someone who attends the same classes and plays on the same sports teams as you do is suddenly gone, it’s very jolting. That’s what happened with the death of my friend, Nick Liberatore, the summer before our senior year. One day he’s there, and the next he’s gone.

With a game like baseball, you have so many chances to start over and come back, and that’s true with life in general. However, at some point, we all have to leave this life, so that’s when all the second chances are over. That’s when the stark reality of how much we owe God comes into play.

It goes back to the way I was raised: I was loved very much, but with that love comes responsibility. There were certain things my parents expected of me, and there are also things God expects of us. When death hits us in the face, it’s the perfect time to examine our consciences as to how we stand before God. Then we have the blessing of going to confession and receiving forgiveness, as introduced by Jesus in John 20. He said to the apostles, “Whose sins you forgive, they are forgiven, and whose sins you retain, they are retained.”

There’s great peace of mind with that sacramental unburdening.

While Nick’s death was an extremely sad thing to happen, I do appreciate the fact that the high school we went to (Mount St. Joseph in Baltimore) is named after St. Joseph, the patron of a happy death. The Blessed Virgin Mary and Jesus were likely present at St. Joseph’s death, which any Christian would want, right?

Before all of our games in high school, we would say an Our Father and then ask St. Joseph to pray for us, so that’s a peaceful thing to consider.

When Nick died, his family started a scholarship in his name at our high school, and I’ve since then made it a permanent scholarship through an endowment. It’s important to share what you’ve been given.

You’ve given to or created other scholarships as well, right?

Yes, that’s something I take very seriously. After signing my first professional contract in 2001, the first thing I did was to give some of that money to the Georgia Tech baseball program. Then, in 2009, I set up an endowment for a permanent baseball scholarship at the school. I was very blessed to have a great coach at Georgia Tech, Danny Hall, so it’s a good thing to give back to the program that gave me so much.

Some people talk of choosing to play certain sports, but I think, in a way, baseball chose me. I enjoyed learning many sports from my father growing up. We would play tennis, golf, basketball and go hunting and fishing. But baseball seemed to be the sport I was particularly blessed to play.

In our family, we were expected to develop our talents and use them properly, so that’s something I’ve tried to do. It’s also something I try to pass along to my children. I had the best childhood possible, so if I can be half the father to my children that my father was to me, then I’ll be happy with that.