Trending Now
You are at:Home»Learn & Live the Faith»Catechesis»YOUCAT Repackages the Catechism for World Youth Day 2011
By Michael J. Miller on July 27, 2011 Catechesis, Featured, On Books 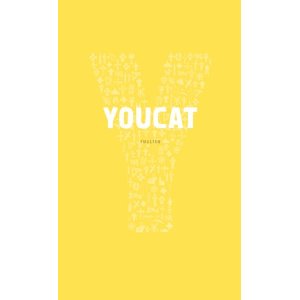 American Catholics of a certain age can remember The Baltimore Catechism, a concise, systematic presentation of the faith in questions and answers, which was published in carefully graded editions for parochial schoolchildren.  In the postconciliar years, when “experiential” methods of religious education were in vogue, textbooks came to resemble magazines with more color photography than doctrinal content. The resulting catechetical anarchy ended in 1992 with the promulgation of the Catechism of the Catholic Church (CCC), which provided an authoritative point of reference for all future catechisms.

Christoph Schönborn, as a Dominican priest and then an auxiliary bishop, served as the secretary of the editorial team that compiled the CCC after consultation with Catholic bishops throughout the world.  Eighteen years later the Cardinal Archbishop of Vienna became editor-in-chief of the Youth Catechism, an adaptation of the text of the CCC in question-and-answer format.

In an interview with the Italian edition of L’Osservatore Romano that appeared on February 3, 2011, Cardinal Schönborn described the development of “YOUCAT”, as the Jugendkatechismus is known in German as well.  “It was the young people who proposed a catechism designed for their age and their world.  The first draft was done by a group and theologians and teachers from German-speaking regions.  Then the text was subjected to a rigorous examination on the part of those for whom it is intended, during two summer camps for youth.  Thanks to this process of ‘breaking in’ the text, it became truly adapted to today’s mentality, especially since the pictures are by the young people, too.  Thus the book in its entirety is an expression of the youth culture, but profoundly imbued with the fruitful seed of the Gospel.”

Getting YOUCAT published was originally an initiative of the Austrian Bishops Conference;  together with its German and Swiss counterparts it obtained Vatican approval for the original German edition from the Congregation for the Doctrine of the Faith.  A dozen other editions of the Youth Catechism followed, in all the languages of Western and Central Europe, as well as Arabic and Chinese.  Most of them were scheduled for release on April 4, 2011.

Pope Benedict XVI decided that YOUCAT should be used at World Youth Day in August of this year in Madrid, where at least a million copies will be distributed.  “The Pope was interested in the project from the beginning,” Cardinal Schönborn noted with gratitude.  “It was his own initiative to honor us with a Preface that he himself wrote….  I am always amazed by the high level of the Pope’s understanding of the new generations’ way of thinking and by his capacity to discuss in depth and to lead young people to a deeper sense of the faith and of friendship with Jesus.”

The 300-page Youth Catechism, designed to fit in a backpack, is a scale model of the CCC, replicating its traditional four-part structure and proportions.  Part Three on the Commandments (33% of the text) has been expanded slightly at the expense of the first two parts on the Creed (35%) and the Sacraments (21%).  Part Four on Prayer clocks in, again, at 11%.  Like its prototype, the Youth Catechism is thoroughly cross-referenced and cites Scripture, the prayers of the liturgy, the Church Fathers, and the saints extensively.   It includes two dozen references to four of the Vatican II documents.  In a novel feature that makes this forum more like the Areopagus in Acts 17, YOUCAT also cites secular writers from many centuries, such as Pascal, Kierkegaard and C. S. Lewis.

Generally speaking, catechesis in recent decades has neglected the doctrine of creation, perhaps out of a reluctance to confront scientific theories.  The CCC begins its discussion of the Creed with a clear teaching of the metaphysics of creation;  YOUCAT affirms the same truths in less technical terms.

Church teaching on abortion, contraception and euthanasia is stated briefly and clearly in the Youth Catechism.  The presentation of the “peace and justice” themes in Catholic social doctrine is less focused and a tad trendy, with two Q&A’s and four sidebars on globalization but only one each on subsidiarity.  The overall perspective is cosmopolitan in its sensitivity to Protestant Christianity and other world religions, especially Judaism and Islam.

The formulations of doctrine in YOUCAT are meant to be easily understood, not definitive.  Despite the somewhat anemic treatment of the priesthood and hierarchy, there are repeated references to the “Holy Sacrifice of the Mass”.  The more tendentious statements in the original German-language draft and a few flashes of sophisticated Viennese wit did not survive the vetting process.

Like the CCC, the Youth Catechism attempts to identify and clarify the important elements of the faith and to present them as part of an integral whole.  YOUCAT was not intended as a reference work, however;  no Editio Typica in Latin is planned.  Rather, as its editor-in-chief remarked, “It will serve as a gateway to the Catechism of the Catholic Church for the youth.”

In another interview with Guido Horst for the German magazine Vatican, Cardinal Schönborn made a related observation:

“[The Youth Catechism] is designed for the young people themselves to read, refer to, and discuss.  The book is constructed in such a way that any young person can find his or her way in it….  The first task of the YOUCAT is to inspire young people with enthusiasm and stimulate them to reflect on the faith.”

“It was very important that the pictures not be selected by adults for the youth.  They themselves were around with digital cameras in order to make the pictures.  Consequently they say:  What the YOUCAT shows here is not the doctrinal world of specialists, but it is our world, which we know and understand.”

During the four years following the publication of the Catechism of the Catholic Church, Bishop/Archbishop Schönborn published a weekly column in the archdiocesan newspaper of Vienna explaining the four parts of the Catechism.  In 1993 he wrote, “For the early Christians, Christian life was simply ‘the Way’ – not just one way among many, but that Way which God himself indicates to us, which leads unerringly through this life, and which allows us to arrive with certainty at our goal….  Here, the CCC will serve as a kind of map.”

In the third Christian millennium, a Catholic under thirty reading about the Church is probably on the Internet.  If she has a question about the faith she is more likely to speed-dial a friend than to consult the CCC.  In that world the YOUCAT—who has the time to text “Jugendkatechismus”?!—will function as a global positioning system (GPS) and a conversation starter.

76 Why did God become man in Jesus?

In Jesus Christ, God reconciled the world to himself and redeemed mankind from the imprisonment of sin. “God so loved the world that he gave his only-begotten Son” (Jn 3:16). In Jesus, God took on our mortal human flesh (> Incarnation), shared our earthly lot, our sufferings, and our death, and became one like us in all things but sin.

{SIDEBAR} “God is so great that he can become small. God is so powerful that he can make himself vulnerable and come to us as a defenseless child, so that we can love him.” —Pope Benedict XVI, December 24, 2005

216 In what way is Christ there when the Eucharist is celebrated?

Christ is mysteriously but really present in the sacrament of the  Eucharist. As often as the Church fulfills Jesus’ command, “Do this in remembrance of me” (1 Cor 11:24), breaks the bread and offers the chalice, the same thing takes place today that happened then: Christ truly gives himself for us, and we truly gain a share in him. The unique and unrepeatable sacrifice of Christ on the Cross is made present on the altar; the work of our redemption is accomplished. (CCC 1362–67)

{SIDEBAR}  “For as often as you eat this bread and drink the chalice, you proclaim the Lord’s death until he comes.” —1 Cor 11:26

403 How is sexuality related to love?

Sexuality is inseparable from love; they go together. The sexual encounter requires the framework of a true, dependable love. (CCC 2337)

When sexuality is separated from love and is sought only for the sake of satisfaction, one destroys the meaning of the sexual union of man and woman. Sexual union is the most beautiful bodily, sensual expression of love. People who look for sex without love are lying, because the closeness of their bodies does not correspond to the closeness of their hearts. Someone who does not take his own body language at its word does lasting damage to body and soul. Sex then becomes inhuman; it is degraded to a means of obtaining pleasure and degenerates into a commodity. Only committed, enduring love creates a space for sexuality that is experienced in a human way and brings lasting happiness.

“Everything that makes a sexual encounter easy hastens at the same time its plunge into irrelevance.” —Paul Ricoeur (1913–2005, French philosopher)

509 Is praying not a flight from reality?

Someone who prays does not flee from reality; rather, he opens his eyes for reality as a whole. From Almighty God himself he receives the strength to cope with reality.