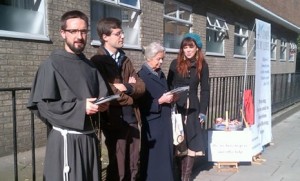 Many of the 316 cities participating in 40 Days for Life this fall are holding 24-hour vigils. That’s  960 total hours!

It is a very powerful witness to know that before any couples show up for an abortion and long after the last abortion worker leaves, there is someone there praying and bearing witness to the community.

For me, praying at the abortion facility in the middle of the night is very moving. It may sound a bit different at first, but it has been a time of peace, silence and solidarity for the thousands of volunteers who do it.

And as one of these 24-hour communities has found, you’re guaranteed to see a little bit of everything.

“It’s been an interesting week at Whitfield Street 40 Days for Life!”

So said Claire, who’s leading one of three London-area campaigns.

Volunteers are praying outside a Marie Stopes abortion facility, which is directly across the street from a residence building for University College London students. “This leads to a variety of colorful meetings and incidents with the students,” she said.

One of the students has been putting up posters in residence hall windows. One sign simply announces, “Pro-choice.” This student was also moved to add a second sign telling vigil participants, “You can’t sing, either!” 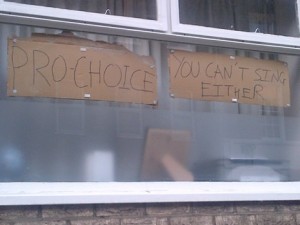 Clare said one of the other signs wasn’t nearly as complimentary, so she chose not to post a photo of that one.

As this is a 24-hour vigil, there are many interesting discussions with students on Friday evenings who’ve been out for a night on the town. There have also been students who asked for prayer, that they might be able to keep their faith strong in the university environment.

“Saturday morning is a different matter,” Clare said. “It’s so quiet you would think no-one lived on Whitfield Street.” It was cool but sunny, and the peace and quiet continued until the students started to wake up and prepare breakfast — around midday.

“Early Tuesday morning, about 7:15 am, we were suddenly joined by a peaceful presence of about 200 students who had obviously been inspired to join the vigil,” Clare noted. “So keen were they that they had all come in their pyjamas.

They all remained well-behaved, even as one of the vigil participants read aloud a prayer for purity.

“It didn’t take us long to realise that their presence had been inspired by the fire alarm going off and their good behaviour was encouraged by the presence of the managers of the residence,” she said, but noted that she “didn’t have the heart to take a picture.”

Wednesday brought great encouragement — a turnaround on Whitfield Street, and word of another possible turnaround at the vigil at London’s Bedford Square. “Both need your prayers,” she said.

Daytime hours are busy but hassle-free. Although there is the occasional critic who will shout things such as, “you idiots are putting the women’s rights movement back 25 years”, with a bit of cursing tossed in.

So, Clare said, “whether you like to pray in the quiet, in the dead of night, in the sunshine or the rain, in the face of abuse, or just in season or out of season, we have a time slot for you!”

Have you had a chance to take part in a peaceful 40 Days for Life prayer vigil yet? If not, here’s the link to the list of campaign locations: http://40daysforlife.com/location.cfm