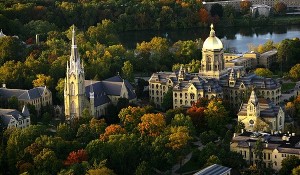 In a coordinated defense of religious liberty, at 11 a.m. yesterday 43 Roman Catholic organizations filed a dozen lawsuits nationwide to strike down the HHS mandate.

The plaintiffs include some of the most significant organs of the U.S. church, including the Archdioceses of New York, Washington, D.C., and St. Louis; the Dioceses of Dallas, Fort Wayne-South Bend, Ft. Worth, the Michigan Catholic Conference, Pittsburgh, and Rockville Centre; the University of Notre Dame, Catholic University of America, and the Franciscan University of Steubenville; and Our Sunday Visitor.

Timothy Cardinal Dolan, the Archbishop of New York, said the step was necessary “to protect our religious liberties from unwarranted and unprecedented government intrusion.”

The Archdiocese of Washington has created a website dedicated to the new lawsuit. Cardinal Donald Wuerl of Washington, D.C., called the mandate a “government attempt to force the Church out of the public square.”

The HHS mandate “amounts to nothing less than a grave threat to our constitutionally protected First Amendment right to freedom of religion,” said Franciscan University President Father Terence Henry, TOR. He added, although they never envisioned taking such a step, the board of trustees unanimously approved the lawsuit.

Our Sunday Visitor linked its involvement to the legacy of its founder, Fr. John Noll, who fought the political clout of the Ku Klux Klan as that organization attempted to impose anti-Catholic policies at the turn of the 20th century. “Today, Our Sunday Visitor stands proudly with our fellow Catholic apostolates and with our bishops in resisting this challenge,” the publication announced in a press release.

The lawsuit has admirers well outside the Roman Catholic Church. These 43 Catholic institutions “are fighting back to protect the religious liberties of all Americans,” said Family Research Council president Tony Perkins this afternoon. “We stand with these Catholic organizations that have refused to give up their long held constitutional right to the free exercise of religion.”

Perhaps nothing so encapsulated President Obama’s fall from grace with American Catholics than the participation of the University of Notre Dame, where his invitation to deliver the 2009 commencement address stirred controversy.

“We have filed this lawsuit neither lightly nor gladly, but with sober determination,” wrote Notre Dame President Fr. John Jenkins in a letter explaining his actions. “Let me say very clearly what this lawsuit is not about: it is not about preventing women from having access to contraception, nor even about preventing the [g]overnment from providing such services…We do not seek to impose our religious beliefs on others; we simply ask that the [g]overnment not impose its values on the University when those values conflict with our religious teachings.”

Notre Dame does not qualify for the administration’s religious exemption because, although it is “firmly grounded in the tenets of Catholicism,” it does not primarily employ or serve other Roman Catholics.

“Notre Dame cannot be forced to give up its beliefs on abortifacients, sterilization, or contraception, nor its devotion to serving all mankind, without violating its religious beliefs and compromising its religious purpose,” the university’s legal complaint states.

Fr. Jenkins writes that he had registered his objection to the administration’s overly narrow religious exemption numerous times without satisfaction.

The university’s legal complaint states that after Obama announced an “accommodation” that would require insurance companies to directly provide contraceptives to employees and students for “free,” college officials “informed the White House that such a policy would not help Notre Dame, which is self-insured, and would not protect its religious liberties.”

The lawsuit argues the government has no compelling interest in the mandate, that forcing a religious institution to finance abortifacient drugs is not the least restrictive means of providing them, that the rule burdens the university’s free exercise of religion, and that it favors those religions that either favor abortion or have no interest in serving members of other religions.

The university’s health care plan is not grandfathered, and officials maintain they are not certain if it qualifies for the one-year “safe harbor” that extends the implementation of the HHS mandate past the election, into August 2013. The uncertainty over future regulations makes it impossible for the university to plan for its future.

If religious institutions fail to comply with the regulations promulgated next year, they could face a penalty of $100 per day per individual covered. In an online video, Chancellor Jane Belford of the Archdiocese of Washington said that could cost that diocese $4.2 million a year.

Although Fr. Jenkins does “not question the good intentions and sincerity” of administration officials, he warned if the HHS mandate were accepted, it “will be the end of genuinely religious organizations in all but name.”

Even some liberal Catholics have greeted today’s lawsuit as a positive step. Michael Sean Winters writes at the dissenting National Catholic Reporter, “The lawsuit, and Jenkins’ commentary, are very good news.”

“First, I doubt there is anyone who could charge Notre Dame with being unreasonably hostile to the Ibama [sic]administration,” he wrote. Yet “the administration has still refused to back off the four-part test” to grant an institution a religious exemption “that was, and is, for many of us, the principal difficulty in finding a solution.”