Trending Now
You are at:Home»Featured»A Call to Conversion: John the Baptist, Jesus, and Mary
By Fr. Edward Looney on March 2, 2013 Featured, History, Live in Christ, MyChurchParish.com 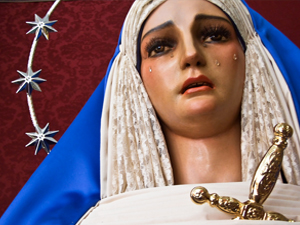 “Reflect for a moment on the wealth of [God’s] kindness. Before he came as a man to be among men, he sent John the Baptist to preach repentance and lead men to practice it. John himself was preceded by the prophets, who were to teach the people to repent, to return to God and to amend their lives. Then Christ came himself, and with his own lips cried out: ‘Come to me, all you who labor and are overburdened, and I will give you rest.’ How did he receive those who listened to his call? He readily forgave them their sins; he freed them instantly from all that troubled them. …What was the result? Those who had been God’s enemies became his friends, those estranged from him became his sons, those who did not know him came to worship and love him.”

For those who pray the Liturgy of the Hours, and more specifically the Office of Readings, you may recognize this as an excerpt from the second reading for Thursday of the First Week of Lent. Two things struck me as I reflected on Asterius’ writing. First, St. Asterius revealed the connection between the liturgical seasons of Advent and Lent. In our current liturgical year, Year C, recall the first Sunday of Advent was Jesus’ admonition, “beware that your hearts do not become drowsy.” The Second Sunday of Advent presented for our consideration John the Baptist’s baptism of repentance and proclamation to prepare the way of the Lord. Generally speaking, a common theme for Advent is preparedness or readiness. A person can be prepared by always being watchful and alert, but also by repenting and doing acts of penance. This theme of repentance becomes dominant in the celebration of the Season of Lent.

Today we celebrate the Third Sunday of Lent. There are two options for the readings, the first the story of the Samaritan woman at the well. If parishes do not proclaim this gospel, the people will hear assigned for Year C, Luke 13:1-9. Jesus in the gospel gives another strong admonition: “I tell you, if you do not repent, you will all perish as they did.” Jesus, however, did not leave us perished. He gave a glimpse of hope by telling the parable of a person searching for fruit on a fig tree and the gardener’s plea. The owner of the fig tree desired to cut down the tree but the gardener bargained for one more year, so that the ground may be cultivated and fertilized, and just maybe, the tree would bear fruit. Here, I find the second connection with St. Asterius.

Notice how St. Asterius connected the forerunning of John the Baptist by his baptism of repentance with Jesus’ mission of forgiveness which resulted in conversion. I wish to suggest that Mary has continued the work of John the Baptist and Jesus today by her many apparitions over time. She continued to bring Jesus’ message of repentance and conversion to those whom she appeared to. When she appeared to Juan Diego in 1431, she desired the Aztecs to believe in the one true God. In 1858 when she appeared to St. Bernadette she expressed the need to pray for the conversion of sinners. One year later in 1859, the same message was given to Adele

Brise in Champion, Wisconsin. Adele was instructed to pray for the conversion of sinners, offer her Holy Communion for that intention, and then catechize the young people. Similarly when Our Lady appeared in Fatima, she again expressed the need for repentance and penance. All throughout history in Mary’s many apparitions she has continued the same message of the Old Testaments prophets, of John the Baptist, and Jesus, who then entrusted it to his disciples. St. Asterius stated “Those who had been God’s enemies became his friends, those estranged from him became his sons, those who did not know him came to worship and love him.” How often has this been the case at the places where Mary has appeared, that the skeptic or hardened sinner experiences a conversion of heart and amends his or her life? Mary assists in her Son’s apostolic mission of bringing God’s wayward children home especially by seeking forgiveness in the Sacrament of Penance and nourishment in the Eucharist.

Mary is our constant intercessor in Heaven. She is the gardener in the gospel who bargained for another year. She tells her Son, give them one more year, and maybe they will finally get it. Maybe they will turn away from sin and grow in their fidelity toward God. Maybe in just one more year, they will return to the sacraments. Give them one more year and maybe, just maybe, those who have been estranged from God will become His children, and they will worship and love Him with all their heart. No matter the liturgical season, be it Advent, Christmas, Ordinary Time, Lent, or Easter, Jesus is continually calling us to conversion of life. And over time, He has sent us His mother, to gently remind us of that message. All we must do now is listen and respond.