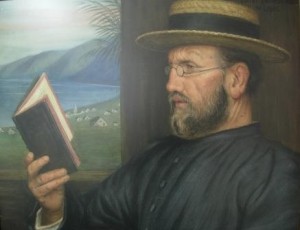 I am not a coffee drinker; my mother on the other hand, having grown up in New Orleans, would gulp down ten to twelve cups a day. But not me. So what do I do on my coffee break? I indulge in a quick read here at Catholic Lane or on my other favorite Catholic site, New Advent.

I did just this earlier today and what a gem I devoured. It was better than a triple Marble Mocha Macchiato with extra whipped cream (I am told by one of my adult daughters that this is an amazing espresso drink). And I enjoyed reading this more than indulging in my weakness, which is a piece of New York-style cheesecake topped with fresh strawberries and a dollop of hot fudge topping.

The article I came across on New Advent was an excerpt from the book, Mother Teresa of Calcutta: A Personal Portrait:50 Inspiring Stories Never Before Told, by Msgr. Leo Maasburg. It was about two of my favorite people, Blessed Mother Teresa of Calcutta and Blessed Pope John Paul II, the Great. Mother Teresa had traveled to Rome to make a request of the Holy Father. The two met greeting each other warmly, and doing away with all usual formalities when Mother Teresa got right to the point:

“Holy Father, we need a saint for our lepers!”

When the Pope asked whom Mother Teresa had in mind for this “job”, she mentioned Father Damian de Veuster, the Belgian missionary born in 1840 who lived on the Hawaiian Islands among the lepers and cared for the sick until finally he himself died of the disease.

“Do you know him, Holy Father?” asked Mother Teresa.

The Pope nodded, and Mother Teresa thought that she had already achieved her aim: “Well then, why wait? When will you declare him a saint?”

Pope John Paul II knew Mother Teresa quite well by this time, well enough to know it would not be fruitful to get into a long discussion with her concerning the matter of the standard three miracles needed before a person could be declared a saint. So he instructed Mother to discuss the matter in person with Cardinal Peitro Palazzini, the prefect of the Congregation for the Causes of Saints.

Bright and early the next morning, at 6:15 a.m. the Cardinal stood outside the Missionaries of Charity’s Motherhouse in Rome, where Mother Teresa was staying. Their conversation was as delightful as the one that had taken place just the day before between the Holy Father and Mother Teresa:

“Mother Teresa, the Holy Father has sent me to you. What can I do for you?” was the first thing [the Cardinal]said, which [Msgr. Maasburg] translated for him.

Mother Teresa went on went on to explain her need in her very direct manner.  She needed a saint for her lepers. The Cardinal continued:

“Yes, Mother Teresa. But as you know, there is a minor difficulty: He hasn’t worked a miracle yet, and we need that for his canonization.”

“That may be so,” replied Mother Teresa, “but in Holy Scripture it says …”, and then she held a Bible, open at chapter 15, verse 13 of Saint John’s Gospel, in front of the eyes of the startled Cardinal and read, ” ‘Greater love has no man than this, that a man lay down his life for his friends.’ And that’s exactly what Father Damian did. Isn’t he already canonized by the Bible; what are we waiting for?”

Mother Teresa had made her request known and had been clear about how the inherent difficulties might be overcome. The Cardinal had to answer and so he did:

Cardinal Palazzini took a deep breath and played his trump card: “You’re right of course, Mother Teresa. But you know, for over four hundred years we have had a tradition within the Church that three certified miracles are required for a canonization. And Father Damian hasn’t even worked one miracle yet!”

“Yes”, she replied with great enthusiasm. “This would be a good opportunity to change that tradition!” Another goal! Success seemed within her grasp. “After all, the Bible takes precedence over canon law”, she added, to put an end to the discussion.

But the Cardinal gave a smile that was both kindly and clever and said, “Mother Teresa, you’re quite right. But don’t you think it would be much simpler for you to ask the Good Lord for these miracles than for us to change our four-hundred-year-old tradition?”

Msgr. Maasburg then reported it was the only time he had ever seen Mother Teresa speechless.

As to Father Damian’s canonization, I am happy to report that Mother Teresa got her saint, as Fr. Damian of Molokai was declared blessed in 1995 and on October 11, 2009, Pope Benedict XVI canonized Father Damian de Veuster of Molokai, thereby completing the sainthood process. It seems both Mother Teresa and Cardinal Palazzini each got their way.