Trending Now
You are at:Home»Learn & Live the Faith»Catechesis»Co-Redemptrix? Thinking Critically About Mary
By Philip Primeau on November 18, 2011 Catechesis, Featured 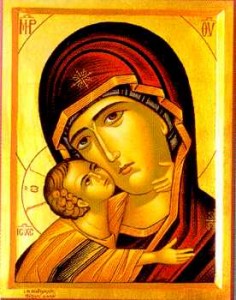 I have great love for Mary of Nazareth, the God-bearer, whose womb housed Divine Wisdom. Given my tender feelings, I undertake this article with hesitation, lest I should appear hostile. Nothing would upset me more than to dishonor our Lady, whose submission allowed the Eternal Logos to assume man’s frail flesh.

Nevertheless, I feel compelled to voice my concern regarding the possibility of Mary being named “co-redemptrix.” There is within the Church a crowd that supports the dogmatization of this title. I do not doubt their sincere commitment to Christ. However, I do believe that in their Marian zeal they have charged into dangerous territory, shadowy territory well outside the realm of historic Christian orthodoxy.

Leading proponent Mark Miravalle, professor at Franciscan University of Steubenville, admits the appellation is controversial. Yet he consistently dismisses suspicions of impropriety, explaining that it simply describes Mary’s status as “co-worker” with God, a duty to which all disciples are called (cf. I Corinthians 3:9).

Perhaps I am over-sensitive, but to my eye there is a significant difference between “co-working” the redemption achieved by Christ and “co-redeeming” with Christ. Humans do not redeem with Christ. We merely tend the kingdom that He wins.

Although advocates assert the priority of Jesus, their words often ring hollow. Why insist upon this radical and divisive title for Mary if it could just as easily (or almost as easily) apply to any ordinary pew-sitter? After all, every Christian is privileged to belong to “a chosen generation, a royal priesthood, a holy nation, a peculiar people” (I Peter 2:9). No, this is a case of haywire Marian enthusiasm, a phenomenon not uncommon in Church history.

I do not deny Mary’s extraordinary role in the economy of salvation. I do not deny that she is our spiritual mother, the model of Christian piety, and blessed among women.

I do deny is that she is entitled to a share of God’s glory, which is what “co-redemptrix” truly implies. Ultimately, the labors of men and women (including Mary) are fruitful only by the sovereign will of God. Consider what Saint Paul writes just before the above cited verse (cf. I Corinthians 3:9), so commonly tossed around by partisans of this bizarre appellation: “So neither he who plants nor he who waters is anything, but only God makes things grow” (I Corinthians 3:7).

Only God makes things grow. Words are important. God is wholly responsible for redemption. This being so, is it not proper to recoil at anything that suggests otherwise . . . even vaguely? We must not fool ourselves into believing that God’s work hinged in any real way upon Mary. His plan was predestined and foreseen before the foundation of the earth. “He is in one mind, and who can turn Him? And what His soul desires, even that He does” (Job 23:23).

Furthermore, it is peculiar that while God chose Mary because of her utter humility, some devotees struggle ceaselessly to elevate her into the highest heights of heaven. Is not Mary precious because she is meek? Yet we continually see our poor little Lady represented as a Hellenistic goddess, complete with gleaming gown, lustrous hair, high cheekbones, and imperious countenance. The greatness of Mary is that she recognized that she is a creature and that God is the Creator and that the twain shall never meet: “My spirit has rejoiced in God my Savior, for He has regarded the low estate of His handmaiden” (Luke 1:47-48).

Ah, now that is more like it: handmaiden. Truly a title fit for the gentle teenage Jewess who bore the Word of God! Hail Mary, full of grace, handmaiden of the Lord.

This offers an opportunity to think critically about Marian devotion within the Church. Unlike most Protestants, we have safeguarded the ancient tradition of honoring the God-bearer. This righteous custom is not without its idolatrous dangers.

Some assign Mary an eschatological role that we may charitably call “out-sized.” This tendency is reinforced by private revelations, which have introduced a number of curious ideas into everyday Catholic devotion. Deeply troubling is the medieval belief, reinvigorated by Fatima, that Mary “restrains” the hand of her Son. No creature, however wonderful, decides the action of the One True God: “Remember the former things of old: for I am God, and there is none else; I am God, and there is none like Me, declaring the end from the beginning, and from ancient times the things that are not yet done, saying, My counsel shall stand, and I will do all My pleasure” (Isaiah 46:9-10). Declaring the end from the beginning.

Indeed, Fatima is in many ways the prime example of righteous Marian enthusiasm gone awry. It has bred an errant strain of piety that affords Mary more influence upon the affairs of men than God Himself. The children at Fatima went so far as to claim that our Lady has “promised salvation” to those who faithfully venerate her cult. Our concern for Mary’s cult is not and never has been decisive in the matter of salvation! The Divine Word assures us: “And I give unto them eternal life; and they shall never perish, neither shall any man pluck them out of my hand” (John 10:28). Even the fervent devotees to Mary among the Orthodox find such oracles at best baffling.

Mary is the Handmaiden of the Lord. Scripture praises her highly and tradition offers many beautiful forms by which she may be venerated. But there are limits, boundaries. Neither Scripture nor the Creeds suggest that Mary reigns as “queen of heaven” in the literal sense of that phrase.

Against those who point to Revelation, let me assert that the Woman of the Apocalypse is first and foremost a type of the Church. Interestingly, one of the earliest commentaries on Revelation, penned by Archbishop Andrew of Caesarea in the late sixth century, roundly dismissed the Marian motif: “Some say she is the Theotokos, but the great Methodios took it to be the Holy Church.” Andrew refers (“some say…”) to a certain Oikoumenios, a Monophysite rhetorician deeply in debt to pagan ideas, as noted by Eugenia Constantinou.

This is not to fall into the old Protestant trap of seeing Marian veneration as a pagan hangover. Scripture calls her “blessed among women,” “full of grace,” and “handmaiden of the Lord.” The ancient fathers also may be mined for sweet praise of our Lady. But let us not, in our love for her, scorn the Eternal God. He made us all of the same clay! Mary is not remotely like Him. She is on our level, not His. He alone is the Lord. All sovereignty and glory belong to Him.

Like the little Jewess, let us sing to the Boundless One, for He is good to us without reason. “For by grace are you saved through faith; and that not of yourselves: it is the gift of God” (Ephesians 2:8). Nothing can definitely merit the grace of God, nor any person–including the Theotokos. “For He said to Moses, I will have mercy on whom I will have mercy, and I will have compassion on whom I will have compassion. So then it is not of him that wills, nor of him that runs, but of God that shows mercy” (Romans 9:15-16).

It is time, perhaps, to put down the works of Saint Louis de Montfort and pick up those of Saint Augustine. The African knew a thing or two about the mysterious and overwhelming grace of God. He had a keen, almost painful, sense of God’s absolute sovereignty: “However strong the wills either of angels or of men, whether good or evil, whether they will what God wills or will something else, the will of the Omnipotent is always undefeated” (Enchiridion of Faith, Hope, and Love, 102). No man will be saved by the intercession of Mary, no matter how many Rosaries he prays, no matter if a scapular hands around his neck or not. If a man is damned, she is impotent; if he is saved, she can only smile, and wait to greet him with a holy and maternal kiss, one slave of God to another.

How many, misled by popular piety, have fingered their pretty beads all the way to hell? Let us trust in the Holy Trinity for salvation and offer worship worthy of royalty to Christ alone, “for there is none other name under heaven given among men, whereby we must be saved” (Acts 4:12).

Hail Mary, full of grace! Yes, fine words. There is no honor in distorting them. And distortion it is to rob the Virgin of Nazareth of her perfect submission. She is our spiritual mother because she offers all things up to the Father. She is our queen because she knows that God alone is King. We do well to remember the real Mary, not the myth propagated by so many porcelain-faced statues.

In the words of Italian writer and politician Ruggero Bonghi, “I offend the Madonna? No! But those who offend make merchandise of her and pretend to spread her worship whilst only seeking gain for themselves and do not fear to clothe her in a pagan garment.”