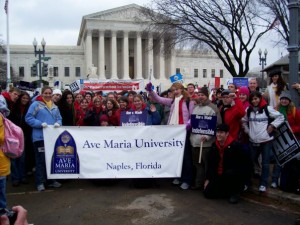 Today, hundreds of thousands of pro-life people are gathered in Washington D.C. for the annual March for Life, commemorating the anniversary of Roe vs. Wade, the 1973 Supreme Court decision that struck down existing state laws protecting unborn children.  For those who have been on the March or seen footage of it on EWTN (you can hardly see it anywhere else!) it’s hard not to take note of the youthfulness of the pro-life movement.

The majority of those in attendance at the March for Life in D.C. every year are high school and college aged, and lately we have even seen pre-teens get in on the pro-life activism action. No doubt this baffles some people who see abortion as a “reproductive choice” that gives young people (who just cannot control their sexual desires) the “freedom” to have meaningless sex without limit or consequence. Who wouldn’t want that?!

What they don’t understand is that once you realize that a significant portion of your generation has been killed off, it has an effect on you.

It’s pretty sobering to know that when I was conceived, my mother had the legal choice to have me killed before I was born. What I and many people my age and younger realize is that to be born after 1973 means that we are lucky to be alive.

I am certain that this is why a growing number of us are so actively pro-life.  Any one of us could easily have been one of those 56 MILLION children who have lost their lives to abortion in the last 41 years, so it is not hard for us to see that children conceived today need our voices and our help. We are a generation lucky (and grateful) to be alive and we survived to be a voice for the voiceless.

Thanks to all the young people who braved the elements to once again turn out in record numbers to tell the Nation:

You march for nothing less than our future. God bless you all! And, please, bring that enthusiasm home with you and continue to be a witness for goodness and life in your hometowns.