Trending Now
You are at:Home»Featured»Lone Survivor: A Tale of Horror and Heroism
By Ken Connor on January 22, 2014 Featured, On TV and Movies 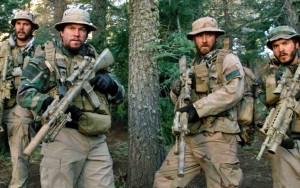 To the extent that art really does imitate life, every American owes it to themselves and to our troops to see the blockbuster film, Lone Survivor. Panned by cynical elites as “shameless war-porn,” in reality this movie portrays the heroism and sacrifice of four members of Seal Team 10 during a mission gone bad in the mountains of Afghanistan in 2007.

Operation Redwings was designed to track the location and movements of an Afghani terrorist, Ahmad Shah, with the ultimate goal of taking him out. The mission was compromised when a group of goat herders stumbled across the Americans and reported them to the Taliban. The team was subsequently ambushed and virtually wiped out in a vicious gunfight. Seal Team Leader, Lt. Michael Murphy, was posthumously awarded the Medal of Honor, and three others received the Navy Cross. The only member of the team to survive, Marcus Luttrell, chronicled Seal Team 10’s heroic story in a book bearing the same name as the film.

For many, Lone Survivor is nothing special – merely another action-packed, blood-drenched diversion to be enjoyed while munching on Milk Duds and popcorn at the local movie house. It’s impact will only last as long as it takes for the next blockbuster flick to hit the big screen. For those who’ve experienced war firsthand, however, the movie provides a glimpse into the horrors and heroism that only those who’ve worn the uniform can understand.

When movies like this are made there are always legions of armchair quarterbacks chomping at the bit, ready to pick and poke and prod in an attempt to undercut and discredit. In the case of Lone Survivor, critics have taken issue with some of the artistic liberties that were taken by the producer of the film. Of course, it should come as no surprise that any time a movie based on real events is made, certain elements are modified for dramatic effect. This is generally why the disclaimer “This film is based on/inspired by true events” is offered. Panning such a film for failing to adhere to a strict factual account is spurious. Dramatic license aside, Lone Survivor communicates some essential lessons about the reality of war and the value of our armed forces that should not be lost on Americans.

First and foremost, war is hell. This axiom is no less true now than when those words were uttered over a hundred years ago by General William Tecumseh Sherman, the Union General who visited that hell on the South during his famous March to the Sea during the Civil War. There is no glory or glamor for the men who are called upon by their country to wage war – only sweat, blood, and sacrifice.

Second, the courage and competence of our troops are second to none. From those first, seemingly futile skirmishes at Lexington and Concord to the bravery and heroism demonstrated in the mountains of Afghanistan, the fighting spirit of the American soldier is incomparable. Every American owes a debt of gratitude to the brave men and women who put their lives on the line to secure our freedoms and way of life.

In light of these truths, our leaders bear an enormous responsibility for ensuring that our troops are honored and respected accordingly. American forces should never be called upon to spill their blood for trivial pursuits or politically-motivated purposes. No military action should be undertaken precipitously and without a clear purpose and defined exit strategy. It is sickening to know how often self-interest and ideology have driven America’s defense agenda, with politicians literally playing games with people’s lives. Any member of public office who is willing to squander the lives and safety our fighting men and women over matters that do not truly affect our national security is not worthy of the office which they hold and should be replaced by those who respect and value our troops.

While America should always aspire to the highest standards of conduct and ethics in the realm of war, those inclined to second guess battlefield decisions should be charitable in their assessments, recognizing that such decisions are made in real time, in the midst of the clamor and confusion and fog of war. War demands expediency in decision-making. After-action assessments have their place, but armchair quarterbacking generally only serves the agenda of those sitting on the sidelines.

Americans are fortunate that we still have men and women willing to put their lives on the line in service of our country. Movies like Lone Survivor remind us that freedom is not free: it is as Thomas Jefferson so famously said, purchased with the blood of heroes and tyrants. America’s leaders have an obligation to our troops to ensure that they have everything they need in terms of manpower and materiel to accomplish their mission, and adequate support when they return from the battlefield. The promises we’ve made to our military personnel should never be compromised or squandered on the altar of politics. At the same time, we should  recognize that  no amount of money or benefits are sufficient to compensate our troops for their service. In the end, the greatest gift we can give our troops is to pay tribute and give thanks as often and as publicly as we can.

If you haven’t seen Lone Survivor, you should. For the majority of Americans, it will make you feel proud, humble, and grateful to live in a country that is protected by true heroes.