Trending Now
You are at:Home»Featured»A Gift for My Grandmother and Saint Anne’s Gift to Me
By Fr. Edward Looney on July 26, 2015 Featured, Live in Christ, Women 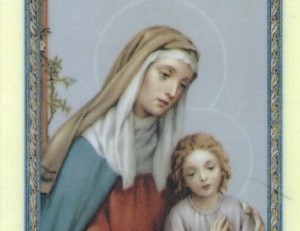 The summer of 2008 was a summer of opportunity for me.  I was able to attend the International Eucharistic Congress in Quebec City, Canada with other young adults from the state of Wisconsin through Catholic Youth Expeditions, a retreat ministry founded by Father Quinn Mann, a priest of the Diocese of Green Bay.

As part of the pilgrimage to the Eucharistic Congress, we traveled all throughout Canada, visiting various shrines, including the North American Martyr Shrine in Ontario, the Oratory of Saint Joseph in Montreal, and the Basilica of Saint Anne de Beaupre in Quebec.

Growing up, I lived with my mother and [maternal]grandmother. I was very close to my grandmother, and in many ways, I attribute my being in the seminary to the role she played in my faith life when I was young. Whenever I visited holy sites, I would always purchase a gift for my grandmother. Since I was at the Shrine of Saint Anne, I decided to get her a rosary, since, after all, Saint Anne is the patroness of grandmothers.

Upon my return from Canada, I began work at a Catholic summer camp. That summer there were two counselors who were not from Wisconsin. One weekend several of the counselors made a decision to visit the National Shrine of Mary, Help of Christians, also known as Holy Hill in Hubertus, Wisconsin. The church has received the designation as a minor basilica and has a Carmelite Monastery attached to it.

The weekend of our pilgrimage fell on the memorial of Saints Joachim and Anne, the parents of Our Lady and grandparents of Jesus. Since we were at the National Shrine on that occasion, I thought it would be appropriate to get my grandmother a gift for what I called “Catholic Grandmother’s Day.” In the gift store, I found a little novena booklet to Saint Anne and decided it was the right gift to give my grandmother.

I am not sure if my grandmother ever used the Saint Anne Rosary or the novena booklet I gave her. Regardless, I found the presence of Saint Anne extraordinarily powerful in my life when my grandmother passed away in July of 2010. Her death was extremely difficult for me, and while it was expected, it was at the same time unexpected.

Her health had been deteriorating since I entered college and she had been in and out of the hospital and nursing home for various reasons.  When my grandmother was dying, I was studying in Omaha, NE as part of the Institute for Priestly Formation at Creighton University. After having received a call from my mother, I was able to get on the next flight from Omaha to Milwaukee in order to be at her bedside when she passed.

As is the custom, the family had to find a rosary to place in the hand of their beloved dead. When I was searching through the rosaries she had, I found the rosary from Saint Anne De Beaupre, and I knew that it was the perfect rosary to use, given the meaning it had to me and the role of Saint Anne in the life of Jesus.

After her funeral, I remained in Wisconsin for a few days. The Saint Anne rosary was not the end of Saint Anne’s continual presence in my life following my grandmother’s death.

The day that I was leaving to return to Omaha, I attended Mass at my home parish. On that day, the parish ladies society, called the Saint Anne’s Society, had a Mass for the members of their society. Following the liturgy, the members renewed their consecration to Saint Anne. I could not help but think that only a few days after my grandmother’s funeral, I was being reminded of Saint Anne.

When I returned to Omaha, life resumed as it was before.  During the summer, seminarians were given one ministry assignment, whether it was being a lector or a server.  What day was I selected to exercise my ministry assignment of serving?  None other than the memorial of Sts. Joachim and Anne.

After my grandmother’s passing, I developed a devotion to Saint Anne, the same devotion that I tried to cultivate in her life by those small little gifts. I have noticed more Saint Anne statues with the child Mary in churches than I ever had before. Now, a few years after her death, Saint Anne continues to appear in my life, reminding me to pray for my grandmother and to recall the many fond memories I have of her.

I am grateful for the intercession of Saint Anne in helping me mourn the loss of one of the most important people in my life.  This year, I am praying a novena to Saint Anne for the repose of my grandmother’s soul.  Those gifts I gave my grandmother in 2008 have become Saint Anne’s gifts to me.