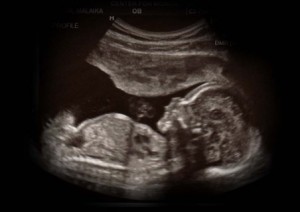 Leyna Gonzalez is a precious little girl – a 20 month old bundle of energy and joy.  Against all odds, she is with us today.

While in utero, an ultrasound was performed at seventeen weeks that revealed she had a rare tumor protruding from her mouth — an oral teratoma — making her survival highly unlikely.

When the tumor was discovered doctors discussed with Leyna’s mother how she could “manage” the pregnancy. One option was “termination” (abortion), while another possibility included an in utero surgery to remove Leyna’s tumor. Thankfully, neither tumor nor abortion would take her life that day.

Instead of death-dealing devices, doctors would guide life-saving instruments into Leyna’s amniotic sac, and during the 68 minute surgery the tumor was removed by laser. Five months later, the little girl was born, and she is quickly approaching her second birthday thanks to the first-ever successful treatment of a fetal oral teratoma in utero.

Pro-lifers often boast, “We are going to win this culture war because we have ultrasound on our side.” And it is true that seeing the image of the developing baby in her womb has convinced many a mother to give birth instead of aborting her child. Life-saving surgeries like Leyna’s only reinforce the fact that a pregnant mother has within her more than a collection of tissue, but a living human being.

But we cannot win a culture war with images alone. The presentation of inarguable facts by ultrasound is not itself an ethical argument. We must recognize this by presenting the scientific facts and pressing the argument that human beings in utero deserve to be treated with dignity and respect, and that the laws of the land must protect this vulnerable population. This is no simple task in our relativistic and individualistic society.

Just last week I toured a mobile ultrasound clinic parked across the street from the largest Planned Parenthood facility in the Western hemisphere, which happens to be located in my hometown of Houston,Texas. The staff reports more than 60 saved babies in the past year alone. Experience shows that ultrasound can help move a pregnant woman to preserve the life entrusted to her.

The raw facts revealed by ultrasound outside a Planned Parenthood are a compelling tool to move minds and hearts. But an ultrasound revealing a fetal abnormality often amounts to a death sentence. Such was the case with Leyna who, according to the case report, would likely have been aborted by her mother if Leyna would have suffered from oral clefting, which “would make [Leyna’s mother] consider the option of pregnancy termination more seriously.” Upon seeing an ultrasound, a mother and father must still recognize and honor the child’s right to life, as prior to any fears, concerns, or “reproductive rights.”

To win the culture war we need men and women who not only know that the child in the womb is a human being, but who also recognize that the measure of society and the measure of the individual is the degree to which he or she protects the innocent and vulnerable. Our arguments must utilize the best of science, but also, the best of ethical and moral argument.

Technology such as the ultrasound or instruments that penetrate the amniotic sac can be used for good or ill. In addition to the successful utilization of these tools, a great benefit of such technologies is that once the humanity of the child is recognized, abortion rightly becomes more psychologically troubling and morally repugnant. It allows a mother to become aware of and honor her natural motherly instincts when she sees a tiny human being within her.

I am told that “Leyna” means “Little heavenly messenger” or “Little Angel.” What an appropriate name for a little girl whose life sends the message loud and clear: Every life is precious.

This article was originally published at Crisis Magazine and is reprinted with permission from the author.