Trending Now
You are at:Home»Featured»I Used to Hate Mary
By Ryan Eggenberger on August 15, 2013 Featured, Live in Christ, MyChurchParish.com 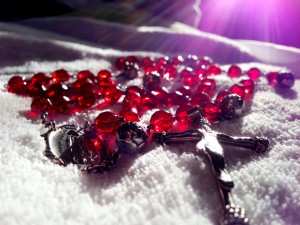 When I was 18 years old, about nine years ago, two years before I entered the Church, I was laying in my bed late at night. Over the side of my bed I was holding a Rosary.

At this point in my life I was not yet Catholic. Intellectually I wanted to become Catholic – well, most days anyway.

But emotionally, I was not ready. Become Catholic? Yeah right!

And at some point that night, a moment I remember very, very vividly, I intentionally dropped the Rosary on the ground and said, “This is stupid.”

You see, at the time I was wrestling with the whole concept of the Communion of the Saints and of praying to the Saints. How could Catholics claim to know that a dead person can hear their prayers? And even if somebody in Heaven could hear your prayers, how could the Catholic Church claim that he or she would have the ability to grant requests?

My love for Mary would only begin after I became Catholic  two years later, after I learned that she was not to be feared, for her only concern and desire for me and for everybody is to come to know Jesus. Her entire earthly life pointed to that reality. Her thoughts pointed to it – in fact, almost every picture of the Annunciation has her reading the scriptures in great expectation. Her body pointed to Jesus, quite literally, by being the instrument through which the Second Person took on human nature forever and entered the human race to redeem it (co-redemptrix). And of course all of her actions pointed right to Jesus, as evidenced by her last recorded words in scripture: “Do whatever He tells you.”

Mary, I came to learn, was somebody who, because of her perfect love for God and for neighbor (me), only wanted me to come to know Jesus as much as she.

Now that’s not so scary after all.

Seven years into my Catholic life, things are totally different. I can’t think of Mary without thinking words like, “home, peace, safety, security, joy, humility, abundance, total fulfillment.” I remember traveling in Australia a few years ago and I came upon St. Mary’s Cathedral in Sydney. Although I was literally on the other side of the world, in a seemingly very far, far away place, the moment I saw the church and realized it’s name was St. Mary’s, all I could think was, “Ah – home. I’m home here, for here is my Mother.”

And there’s nothing like being in a Catholic Church on a Holy Day of Obligation, like the Feast of the Assumption or the Immaculate Conception, when for her sake, men and women all around the world stop their busy lives to come and receive the love of God, Jesus Christ, on a day marked by her name. It is through Mary that we have access to the Love of God, whose name is Jesus:

This motherhood of Mary in the order of grace continues uninterruptedly from the consent which she loyally gave at the Annunciation and which she sustained without wavering beneath the cross, until the eternal fulfillment of all the elect. Taken up to heaven she did not lay aside this saving office but by her manifold intercession continues to bring us the gifts of eternal salvation . . . . Therefore the Blessed Virgin is invoked in the Church under the titles of Advocate, Helper, Benefactress, and Mediatrix.” (Catechism of the Catholic Church, paragraph 969.)

“My soul MAGNIFIES the Lord…”

One last thing about that late night nine years ago. I woke up in the middle of the night that night, leaned over, picked up the Rosary, kissed it, put it on my side table and went back to bed.