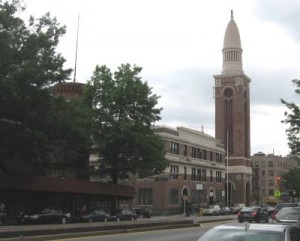 News this week that is as personal to me as anything that will ever happen in the pro-life movement: the largest abortuary in New York City shut down because of 22 years of pro-life witness at its doors by Msgr. Phillip Reilly and his associates of Helpers of God’s Precious Infants. Read the incredible story in the New York Daily News here.

This behemoth, the Ambulatory Surgery Center of Brooklyn opened right down the street, a mere 70 yards, from the Church (pictured left) in Brooklyn where I grew up, where I received all of my Sacraments of Initiation, where my grandparents lived and died, where all of my parent’s generation on both sides of the family were born, raised and were wed. This villainy happened in the shadow of Saint Michael’s Church. The juxtapositions were gut-wrenching.

My mother was born in the apartment buildings twenty yards away from the site where it is estimated a quarter of a million babies would later be slaughtered. She would later move three blocks away to the same street where my dad was born, where they would grow up together, get married, and where I would be born and spend the first thirteen years of my life, in an tenement building where my grandmother, two aunts, and three cousins also lived, which was next to the tenement building where my other grandparents, aunt and uncle lived.

It was a classic New York story of immigrants and their children living in poverty, in an industrial neighborhood in the Great Depression and somehow managing to get through, of children of different ethnicities bound by their Catholicism marrying and eventually moving to better homes in the 1970?s.

That abortuary was built in the epicenter of the land where three generations of my family and neighbors lived their faith. The stories from the Great Depression being too numerous to recount in one telling:

Nana giving dad and his siblings each a penny to put in the poor box in church, as they trod in shoes with cardboard placed inside to cover the holes in the soles.

Crusty old Msgr. Cherry always having vouchers to local shoe stores, and odd jobs for men who were unemployed and desperately poor.

The Sisters of Saint Joseph who staffed the school picking the kids (like dad) who often went hungry and showed signs of malnourishment to bring their sheets to the laundry, and upon their return telling them that three of the sisters were ill that day and couldn’t eat lunch, asking dad if he would help them not to waste the food by eating it.

Nana’s brother, Uncle Eddie, who would give my father, his brother and sister his nickel for the trolley car so they could buy candy (a bagful for the nickel in those days) and then walk the two miles to work.

Mom’s mother saving her pennies and buying a steak for my grandfather to eat when he came home from 16 hours of work (when the five children and she had oatmeal for dinner), and my grandfather cutting that small piece of meat into seven equal pieces for everyone while my grandmother protested that a hard-working man needed the meat more.

In truth, I could fill a book with hundreds more such anecdotes of the goodness and shared sacrifice of these great people of Saint Michael’s Church. As we gentrified and moved on, a large influx of hispanics moved in behind us on the socioeconomic ladder and became the new face of Saint Michael’s.

But something changed, radically.

While being poor, their poverty was not the grinding poverty of the Great Depression, and they had social safety nets, unlike my parents and grandparents generation. Forty years ago in the same year we moved out a new remedy for poverty was held out: Abortion.

Some thirty-five percent of the 88,000+ ANNUAL abortions in New York City are hispanic babies. The 2008 Vital Statistics data set reveals that blacks and Hispanics have a combined 79 percent of all abortions in New York City, a number that is remarkably consistent over the dozen or so years for which numbers by race and ethnicity have been recorded. NYC’s annual number of abortions has been hovering between 88,000 and 92,000 for years.

The love, the shared sacrifices, the enduring vision of hope for better times that would take my family decades and three generations to realize was supplanted on that same land, in the shadow of that same church, by a vision of infanticidal despair and hopelessness, of quick-fixes and moral shortcuts that took the lives of a quarter-million babies.

This abortuary was always a personal one for me. It stained the hallowed ground where generations perfected themselves through grinding sacrifice and gritty faith. Towering triumphantly over the ruins stands mighty Saint Michael’s Church, a reminder to me that the love of God, as witnessed so powerfully by my parent’s and grandparent’s generations, will always prevail over darkness and despair. Msgr. Reilly and his helpers have shown us what the gritty denizens of that industrial class neighborhood showed for decades: