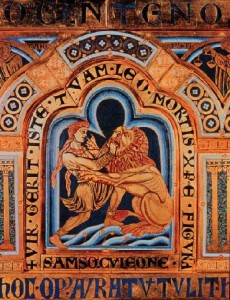 On a hot summer day the kids and I were headed to the grocery store. Our house doesn’t have air conditioning and it gets hot—the thermometer in the living room read 85 yesterday—at 9 PM!—so when we’re in the car we try to make up for it. We had the air conditioner cranked up as high as it would go and air was rushing into the car with a delicious, cooling whoosh.

In the seat behind me the four year reclined with a contented smile, the very picture of languorous ease, and said dreamily: “If the air keeps blowing into our car we’ll float away in the sky.”

I was momentarily baffled. Our car float into the sky because of the air conditioner? Like Marilla in Anne of Green Gables, who often found herself “thoroughly worn out trying to follow the gyrations of Anne’s thoughts,” it can take me a second to connect all the dots to catch up with my four-year-old’s mental processes. But when I finally got it, I smiled: balloons! (We’d had a birthday earlier in the week, and the balloons were a great source of interest and delight.)

“You’re right, sugar plum,” I agreed. “We’ll float off into the sky just like a birthday balloon!”

She smiled with the satisfaction of being understood (and cool).

It reminded me of a great resource for studying the Bible which I discovered unexpectedly: telling Bible stories to my kids.

In his lecture series, How to Study the Bible, Scott Hahn talked about the importance of attention to the text and asking questions when trying to understand Scripture:

“Now as we approach a Biblical text there are three basic stages that you have to pass through in order to really get what you can get from a text. The first stage in some ways is the most important: observation. The second stage I call interpretation. And the third stage, which some people forget, is application. The first stage, observation, is really crucial, and it’s the one that most people pass through the fastest and it’s really the one that should take the longest amount of time . . . You read it and you mull it over, and you ruminate, and you contemplate, you deliberate, you read it again and again and again . . . At this stage of observation one of the most important things you can do is ask questions. Who? Where? When? Why? What? How? Cross examine. Interrogate the text. Don’t be afraid to ask questions that you don’t know the answer to.”

That’s where kids are a great help. They slow you down when you’re speeding through a text, they have a wonderful eye for detail, and the stories are still fresh for them so they linger over particulars which we bigger folk tend to gloss over in our rush to abstract principles. They also ask questions, lots of them, and lots of them very good for digging deeper into the meaning of Scripture.

One example (out of many) that particularly stands out came when I was reading the story of Samson to my four year old, and she asked a question that ended up cracking open the text in a whole new way for me.

We have a “Picture Bible”—a comic book version of the Bible—which the kids really enjoy. And truth be told, a comic book reading is about as deep as I’d gotten into understanding Samson: it was all about the super powers, the Pow! Biff! Bam! as Samson performed amazing feats of strength and daring. But as I was reading to my daughter about Samson and Delilah, with Delilah continuously scheming to trap Samson, my daughter asked: “Why did Samson keep going back her?”

I had to think about that one. I didn’t quite have an answer.

I mean, it’s not like Samson didn’t know what Delilah was up to. First of all, he lied when Delilah asked him the secret to his great strength and how he could be subdued—obviously because he didn’t trust her. And why did Delilah even ask such a question? Obviously because she wanted to betray Samson to his enemies—which is exactly what she tried to do.

After Samson gave Delilah a false answer, Delilah put it into operation trying to capture Samson. When it didn’t work, Delilah then had the gall to get mad at Samson for making her look foolish in trying to trap him with the fraudulent scheme! She should have been a politician. But Samson went back to her, to repeat the whole episode again and again and again, with Delilah continually trying to betray him, and Samson going back to her again after each failed trap.

Why would he do that?

It couldn’t have been just because of her beauty, or Samson’s desire. I don’t doubt that she was beautiful, but there were lots of other fish in the sea then just as there are now (the story itself tells of several other fishing expeditions Samson had been on). So there were many other beautiful women—including women who weren’t out to get him (and the text tells us specifically about a few of those, too).

Given that, and given the danger of Delilah, why didn’t Samson leave her in the dust and move on after the first time she tried to betray him?

The answer I finally came to (though I’m sure there are many layers of meaning in this passage of Scripture, and this is only one reading) is that it was because Samson didn’t think Delilah was dangerous. Oh, he knew she was trying to betray him. But he thought he could handle it. He thought he could manage the situation.

That reading also made sense of an odd passage at the beginning of Samson’s story. Samson was on a journey when a roaring lion burst upon him. Samson was unarmed, but not afraid: he engaged the beast in hand-to-hand combat, and slayed the lion. A heroic and spectacular deed.

But when Samson traveled back to that place again, he went to see the carcass of the lion, and discovered that bees have made a hive in the corpse and the hive was full of honey. The law forbade Samson from eating the honey, as it came from a dead body, which was unclean, but Samson took the honey anyway.

What I started to see in Samson’s story was something very ancient and very modern: Samson wanted to decide things for himself. He was willing to follow God, but only on his own terms. He would give battle to the enemies of Israel, as he did in fighting the lion and the Philistines, and he was strong and courageous in pursuing this calling from God. But when he found the honey (or Delilah)—something which to him seemed desirable—Samson wanted to decide for himself what was safe and what was dangerous, what was harmful or not, what was good and bad, right and wrong.

God’s law told him the honey was off limits, but Samson decided for himself that it was alright to take it. God’s law told him to stay away from Delilah, but Samson decided for himself that he could indulge a dalliance with darkness, extracting what seemed sweet, without being tainted by the unclean. In the process, he overestimated himself and underestimated evil.

He was wrong, and he paid the price. But in Samson’s experience, we learn a powerful lesson about our relationship with God: we are to give God our total selves, not just part of our life. To give just part of our life to God, as Samson did in battling the lion and the Philistines, but withholding other areas of our life from God’s kingship (like the honey or Delilah), doesn’t work. As Jesus showed in the Gospel stories of the Widow’s Mite (Mk 12, 42-43) and the Rich Young Man (Mk 10, 21), we are to turn over all of our life to Christ.

Samson’s story also teaches much about temptation. Sometimes evil tries to overcome us like a raging lion, using fear and force and threats of pain and suffering. Other times it approaches with soft enticements, like the honey, or Delilah.

We also learn about ourselves in Samson’s story, that though we may be strong against one sort of temptation, we can still be susceptible to others.

Another sobering lesson came in the realization that Samson was far mightier than I, yet Samson still fell. It shows the great danger of choosing to go our own way instead of staying close to God.

And all this is still just scratching the surface, there is so much in Samson. Some additional resources to start going deeper into Samson’s story include Father Mitch Pacwa’s Bible study with Catholic Scripture International called Joshua, Judges and Ruth, the commentary in the Navarre Bible and Ancient Christian Commentary on Scripture. There’s a new Bible study from Dr. Brant Pitre called The Old Testament: A Historical and Theological Journey Through Jewish Scripture that includes a lecture on Samson (and while I haven’t done this study yet, I’ve gone through other studies from Dr. Pitre and they have all been amazing—I can’t wait to check out The Old Testament too!), and there are many other Bible commentaries and studies.

The main point here is that there were tremendous riches laying right before me that I never noticed until I slowed down and started asking questions—or actually, until my daughter slowed me down and then I tried to answer her questions.

So there you have it, a new (old) tool of Scripture study for you: read Bible stories to your kids! I’ve found that it’s a great way to focus anew on what’s actually in the text, and it’s a great source of questions to get us deeper into the meaning of Scripture. Besides that, it’s as good for the kids as it is for us.

All those Bible stories combine together to form a web of connections, like the link between air-conditioning and balloons, that as a whole form a world-view, a framework for understanding reality, a sacramental imagination, and a repository of wisdom, which they will need to navigate the challenges they will surely face in life.