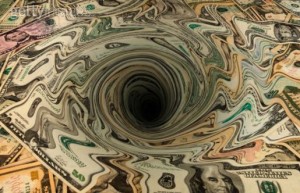 All the Devils Are Here, by Bethany McLean and Joe Nocera, is a fascinating look at the principle players who brought about the financial crisis of 2008. It reveals the motives and mistakes made over the course of a decade by those who were entrusted with running the largest financial corporations of the world as well as those who were entrusted with regulating them. It explodes the myth that the market is self-regulating in a way that will result in what is best for all. It also explodes the myth that centralized regulation of huge corporate interests will protect the average citizen from corporate greed. I can’t imagine too many Austrian or Keyensian capitalists would truly like what is revealed in this work, for both sides can only defend their positions by ignoring half of what these authors have uncovered and presented for us.

One of the great myths of the subprime mortgage bubble was that it was brought about because of government regulation. Yes, it is true that there were regulations to put more low income families into homes, but the vast majority of subprime activity did not fall into that category. Most of that activity was refinancing existing mortgages or home equity mortgages, and most was done in a way that was almost entirely unregulated.

Efforts were made to regulate this activity, particularly by the states that were overridden on 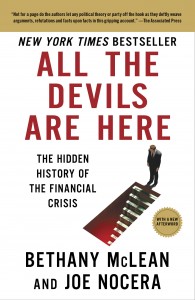 the grounds that federal rules override state rules. The corporations fought against all efforts to impose federal regulations with the willing support of both Republican and Democrat legislators. The Fed, led by Alan Greenspan, believed in the promises of the Austrian school, especially that the market would best judge economic activity. There was an assumption that CEOs drawing seven or eight-figure incomes from multi-billion dollar companies knew economics better than anyone else.

Another prevalent myth is that sub-prime mortgages were the principal cause of the crisis. All the Devils Are Here reveals that the bundling of these mortgages into packages for trade on the market (CDOs) and betting on these packages (Credit Default Swaps) created a world-wide calamity. These practices were also almost completely unregulated.

The fact is that the warning signs of the economic collapse were abundant and there were those in the system—both in the government and in the corporations—who saw the signs and tried to warn them. They were ignored. There were also those who could have seen it, but were removed from the decision-making process because they were dismissed as cranks who were interfering with money-making. There were those for whom the apparent success of what was being done blinded them to the impact their decisions were having on the common citizen. I don’t mean that they deliberately ignored the bad effects, they just didn’t see them, they couldn’t see them from their lofty perches on top of their financial empires. There were also those who preyed on the hopes and dreams of the uninformed. It wasn’t just that they tricked people who couldn’t afford any kind of loan into buying a house, they tricked lots of middle-class people who already had homes into accepting new loans with terms that were much worse. There were examples of outright fraud in the process.

From the prospective of Distributism, All the Devils Are Here reveals the great danger of centralized power. Whether it be government or corporate, power too far removed from the lives of ordinary citizens doesn’t see (or ignores) the impact their decisions have on those lives. Centralized power considers the local issues to be inconvenient nuisances to their centralized planning and objectives. We believe that, when the scope of power is localized, the average local citizen can have a much greater impact on the policies – both government and corporate – and that will give us a truly free market, greater economic stability, and greater freedom overall.

Editorial Board, The Distributist Review