Trending Now
You are at:Home»Learn & Live the Faith»Apologetics»A Trifecta of Dishonesty
By Louie Verrecchio on December 3, 2012 Apologetics, Columnists, Featured 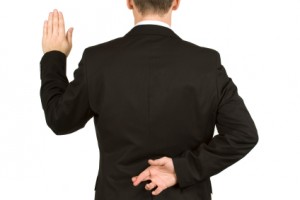 In the words of Billy Joel’s 1979 hit ballad, “Honesty,” “Honesty is such a lonely word; everyone is so untrue.” How much more true do those words ring today, some three decades later? To wit, I’d like to touch on three examples of rank dishonesty: one spiritual, one intellectual, and one liturgical.

In the weeks since the election, I find myself pondering the perpetrators of identity theft quite a lot.

No, not some underground network of greasy haired, pigment-challenged hackers intercepting credit card numbers from unsuspecting online shoppers, but rather those relatives, friends and acquaintances – and we all have them – who self-identify as Catholic (or even generically Christian) even as they support politicians, policies and programs that directly contravene the most fundamental Christian moral teachings.

One of the most perplexing things about these otherwise polite individuals (at least the ones that I know) is that they would never consider bearing such patently false witness against anyone other than the Lord in so casual a manner.

And while the severity of the offense seems lost on many in our increasingly secularized society, it truly is nothing less than an act of divine slander (or more appropriately stated, blasphemy) that should engender outrage on the part of every decent human being. You know, like the same kind of outrage we might express if our own character was under such scurrilous attack.

Seriously, how would you react if a supposedly devoted friend went about in public invoking your name and claiming that your teachings and the example of your life form the very foundation for a worldview that is utterly foreign to your most deeply held convictions?

How long would it take before you’d let the scandalmonger know in no uncertain terms that they have no right whatsoever to abuse your good name in such way?

Not very long, I suspect.

Now imagine if you witnessed this very same thing being perpetrated against someone very dear to you. Would you sit by silently while your loved one was slandered?

No, of course not. Yet those who slander the name of Jesus Christ are rarely confronted as to the nature of their offense, even by those to whom the Lord specifically entrusted the duty of speaking in His name, saying, “He who hears you hears me.”

Consider, for instance, the antics of Barrack Obama, the de facto leader of the Christian identity theft ring in the United States, who chirped in 2011, “There’s something about the resurrection of our savior, Jesus Christ, that puts everything else in perspective.”

What kinds of things? Well, tax policy, for one.

Speaking at the National Prayer Breakfast earlier this year, Obama proclaimed his devotion to Christ saying “For me as a Christian, [the desire to increase taxes]coincides with Jesus’s teaching that ‘for unto whom much is given, much shall be required.’”

He also claimed to find inspiration for his broader public policy positions in the Scriptural exhortation to “speak up for those who cannot speak for themselves, for the rights of all who are destitute.”

Perhaps in anticipation of the criticism this naturally invites in light of his extreme pro-abortion record (which includes his well-documented opposition to the “Born-Alive Infants Protection Act”), Obama added as cover, “In the words of C.S. Lewis, ‘Christianity has not, and does not profess to have a detailed political program. It is meant for all men at all times, and the particular program which suited one place or time would not suit another.’”

So, according to the Obama Doctrine, it is perfectly reasonable for one to lay claim to the name “Christian” while actively promoting the slaughter of the most defenseless human beings (among other objective evils), as though Christ Himself considers such matters little more than regulatory trifles akin to establishing national gas mileage standards.

This is nothing less than identity theft, divine slander, blasphemy. .. . Call it what you will, but for the love of God, call it out as the dishonest rubbish it is! I know Jesus Christ. Jesus Christ is a friend of mine. Mr. President, you’re no Christian, and neither are those who elected you.

Now, it’s all well and good for me or other ordinary Christians to say so (we do, after all, recognize who is and who is not one of our own), but isn’t it high time for those men who have been ordained to teach, sanctify and govern with the authority of Christ to defend His Holy Name just as clearly?

As though it’s not enough to redefine “Christian,” the enlightened Left in the psychiatric community are lowering the bar once more in redefining the “new normal.”

According to the NY Times: “The fifth edition of the Diagnostic and Statistical Manual of Mental Disorders (due out in 2013, and known as DSM-5) has eliminated five of the 10   personality disorders that are listed in the current edition. Narcissistic personality disorder is the most well-known of the five…”

It seems to me we’ve seen this science fiction flick before (back in 1973, to be more specific), when the American Psychiatric Association officially declassified homosexuality as a mental disorder—a move sparked not by reliable clinical evidence but in response to homosexual activism.

Could the APA’s latest treatment of narcissism be just another battle in the very same war against nature?

In an interview that I conducted in 2011 (“The liturgical impact of homosexuality in the priesthood”), world-renowned psychiatrist and expert on same-sex attraction, Dr. Richard Fitzgibbons, said: “Narcissism – a personality disorder in which an insatiable need for admiration often leads to attention-seeking behavior – is prevalent among men who struggle with homosexuality.”

In time, I suspect that we will discover that the pending declassification of narcissism in DSM-V is the handy work of the very same activists who after successfully forcing the APA to scrub homosexuality from the list of treatable mental disorders are now looking to do the same with the subcategory of disorders that are so closely associated with it.

As LifeSite News reported last August, activists are already plotting to pressure the APA to change its approach to what they call “minor-attracted persons,” a group that travels very comfortably in homosexual circles. (See, for example, the North American Man Boy Love Association — if you can stomach it.)

Given the Left’s unbridled desire to redefine the Judeo-Christian understanding of marriage and family by any and all means necessary, and the tendency of government-run healthcare bureaucracies to limit access to services, one can reasonably assume that Obamacare will only further fuel the activist takeover of the APA in years to come.

Last Sunday (November 25th), unable to assist at the traditional liturgy that I typically attend, I participated in the Ordinary Form Mass at a nearby parish. This date, on the new liturgical calendar, was the Solemnity of Christ the King, and though I’ve long since recognized and lamented the degree to which the Church has effectively ceased proclaiming the Lord’s Sovereignty lo these past forty years, the observance of this “feast” such as it was celebrated at this Mass was an occasion of great disappointment, and indeed, suffering.

Thanks to the structure of the Novus Ordo Missae and a lack of liturgical instruction, many Catholics today place far too much stock in the quality of the homily as it relates to their experience of the sacred liturgy (a topic that deserves more attention than I can give it here), but in the case of the Mass that I attended last Sunday, the disconnect between the very beautiful prayers found in the Roman Missal for that day (e.g., the Collect, Preface and Prayer After Communion) and the saccharine “Jesus, the Lord of love, is King of my heart” sermon that I had to endure, was palpable. In fact, it all but reduced the aforementioned prayers to empty rhetoric.

It was, however, a very honest homily inasmuch as it represented the dominant post-conciliar mindset in the Church very well: one that effectively neuters the Lord’s Kingship. It seems that most Catholics in our day have been conditioned to think of “Christ the King” as an honorific that carries with it precious little in the way of rights and prerogatives beyond those that are purely spiritual.

Think about it: Aside from the observance of this annual solemnity, where in the magisterium of the last four decades do we see evidence that the Church considers the people of this world duty bound to the sovereign rule of Christ the King?

In other words, can you point to any consistent exhortations coming from the Holy See (or any of the world’s bishops and their national conferences) over the last several decades indicating that the dominion of Jesus Christ extends even to those who are outside of the Christian faith (like Barack Hussein Obama and company), in such way that the whole of mankind – the individual, the family and the State – is subject to Christ the King? I certainly can’t. But guess what: That is precisely the enduring truth that Pope Pius XI intended to proclaim all the more clearly by establishing the Feast of Christ the King.

Take a moment to read his Encyclical, Quas Primas, and ponder the difficult question: Would it not perhaps be more honest for the Church to strike the Solemnity of Christ the King from the liturgical calendar than to continue paying lip service to the title for a mere 24 hours each year?