Trending Now
You are at:Home»Learn & Live the Faith»Catechesis»First Week of Advent: From the Incarnation to the Parousia
By Rev. Tucker Cordani on December 3, 2012 Catechesis, Columnists, Featured 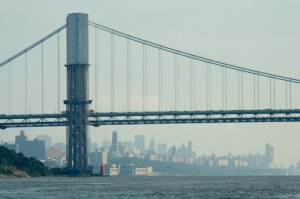 Wednesday, November 21.  I drove eleven hours through the Megalopolis of Washington, D.C., Baltimore, Philadelphia, and New York City.  It was the day before Thanksgiving, the busiest traveling day of the year in the U.S.  Was I crazy?  Maybe, but a daylong drive through stop-and-go traffic was what I wanted to help prepare for Advent.  I do my best thinking — and a lot of praying — in the car.

In Advent we prepare to celebrate the birth of Christ, and also prepare for the Lord’s return.  This spiritual season happens despite the American months known as “the holidays,” a contemporary cultural mechanism seemingly designed to drum out the presence of Emmanuel, “God with us.”  The reason for the season is not to give in to gluttony or avarice, capital sins backed by popular demand.  Instead we become ready to receive Jesus Christ from start to finish, from the Incarnation to the Parousia, the truth that supersedes — and surprises — the world.  Advent prepares us to live our faith to the fullest, in the here and now, the then and there, and in “thy kingdom come.”  Every year we move closer to the kingdom.

Advent rings in the new liturgical year, year “C”, during which we read The Gospel According to Luke, while continuing to celebrate this Year of Faith throughout the world.  Luke is the perfect gospel for the Year of Faith because as a writer his purpose is to “investigate everything accurately and anew” (1:1), so that the ‘friend of God’ may understand and accept the great prophet Jesus Christ who was sent to proclaim the gospel of the kingdom to a world made no room for him at the inn.

This Word of God continues to be as living and effective as it was when Luke composed his gospel circa AD 75.  He wrote for Greeks and Romans, learned men and women, the power brokers — but he also offered hope for salvation of the poor.  Luke’s narratives of the baby Jesus in the manger, of the shepherds and the angels, are among the best-loved stories in the Bible.  Contemporary celebration of Christmas would be unimaginable without the stories given to us by God through Luke.  This is the most wonderful time of the year.

By the time I reached New York City, it had grown dark.  But the lights of Manhattan burned brightly.  There is no skyline like New York City.  Great cities bespeak of achievement but also of tragedy.  Whenever I pass through I think of the apocalypse, and in my mind I saw the Twin Towers as they once stood before 9/11.  If there is no time with God, then the events of history, the Annunciation, the Incarnation, and the Rapture, happen simultaneously according to God’s plan; they are independent of what we yearn for in this world.  The readings during Advent in the lectionary and in the Liturgy of the Hours are apocalyptic.  The cosmic turmoil described by Jesus the prophet depict the primordial chaos out of which God brought order (Gen 1:1-11) and the destruction at the time of Noah (Gen 7:12; 9:9-11).

Apocalyptic language and imagery are used to describe the entrance of God into history (Isa 13:9-10).  We begin this season with these stories because they root us in the past even as they prepare us for the future while we remain exiled on earth.  This reality is greater than what we see around us and our faith helps us to remember that there is still some mystery the world.  If we are Christians then our faith will not be shaken, though “the powers of the heavens” are shaken.

Advent requires imagination.  The Nativity scene with the animals and the manger and baby Jesus is familiar and endearing, a beloved part of the Catholic landscape every year.  Then again, those who are frightened by our traditions continue to work against us with the help of the courts and the media that hold our values in contempt.  The Rapture is more their style — total destruction, though not the type they have in mind.  The image of Christ’s return is not something set on the lawn like a crèche.  I do know that there are applications for smart phones that count down the moments until the end of the world. If we are prepared we have nothing to fear, says the Lord.  “Stand erect and raise your heads because your redemption is at hand” (Luke 21:28).   We have heeded the call of the Lord to stay awake and to not give in to popular thinking that says too much of everything is never enough.

For hours I inched north at 20 miles an hour and looked up to see a river of red tail lights stretching into the distance, across the George Washington Bridge.  Occasionally things loosened up and I shifted into high gear and drove free and easy.  Soon the traffic ground to a halt and I hit the straightaway again, no longer stuck in second gear.

The challenges of which Christ speaks are cosmic, spiritual — and natural — so great that people will die of fright when he comes again in glory (Luke 21:26).  We prepare for the Lord’s birth, even when we already know what happened, and when — to within a decade or two.  The Second Coming remains a mystery but the countdown is on.  In Luke we have a skilled guide through the Year of Faith, the travel writer, highly educated, an objective historian who venerated the truth of the Old Testament brought to fulfillment in Christ.