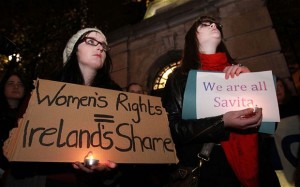 For the Catholic Church and the pro-life movement, Ireland’s steadfast preserving of its laws defending the rights of the unborn has been a beacon of hope in Europe. Ireland has continued to hold the highest birth rate of other country in the European Union, and is one of the very few European countries whose population has maintained continual growth. Statistical evidence explaining this fact points directly towards the Irish government’s stance on abortion, as Ireland has remained one of only two states in the European Union which currently has banned abortions.

A recent movement in Ireland has brought this ban into serious debate. The death of a 31 year-old, Indian born woman named Savita Halappanavar on October 28, 2012 has triggered a very emotional movement within Ireland. The cause of the Halappanavar’ s death was determined to be blood poisoning from a miscarriage; a result which doctors claim could have been prevented if Halappanavar had not been refused abortion.

In response to the steadily growing national and international outcry concerning the death of Halappanavar, the Irish government has resolved to make some serious legal changes. In 1992, Ireland’s Supreme Court decided that abortion would be permitted in the extreme case where there existed “a real and substantial risk to the life of the mother.” Despite the Supreme Court’s ruling, however, this decision was never officially written into law. Now, in light of the recent protests taking place both in Dublin as well as well as in other European countries, the Irish government has decided to take the country’s first real steps toward changing its anti-abortion ban. Not only has the Irish government firmly resolved to clarify the exception regarding the physical safety of the mother, Irish government officials have begun to more seriously consider giving into the demands of its population, the requests of its neighbors, and the attacks from international pro-choice organizations, to modify the abortion ban further. The week of January 8th began a series of important meetings of the Irish government’s Health Council committee to discuss the legal and moral ramifications of altering or removing Ireland’s current abortion ban. The three day parliamentary discussion panel took place in Dublin.

Amid this very emotionally charged political debate, the bishops of the Catholic Church in Ireland have remained strong in the Church’s stance on abortion. The Irish Catholic Bishops Conference, in an official statement which was released December 18th, stated: “It would pave the way for the direct and intentional killing of unborn children. This can never be morally justified in any circumstances.” Archbishop Charles Brown, while speaking at a World Day of Peace Mass in Dublin on January 1st stated clearly that all “need to work vigorously and courageously to protect and nurture human life from conception to natural death.” Pope Benedict too, has spoken out about Ireland’s plans to change its laws: “I must note with dismay that, in various countries, even those of Christian tradition, efforts are being made to introduce or expand legislation which decriminalizes abortion.”

For a country whose population has been famous for being dominantly Catholic, it seems logical that the current debate in Ireland should be resolved fairly easily, especially considering how straightforward the Church has been in regards to the maintaining of Ireland’s current laws protecting the unborn. Unfortunately, many believe that Ireland’s Catholic background has, in recent decades, become more of a cultural tradition rather than a religious one, a consequence due in no small part to the continual rise of secularism in Europe. Like the Israelites in the Old Testament whose faith in their God had become weak and who began to long to live in the hedonistic lifestyles of their neighbors, many people of Ireland find themselves losing the faith in their Catholic beliefs and are being seduced by the attractiveness of ‘reproductive freedoms’ which are in place in other countries.

The question which now remains is this: How far are the people of Ireland willing to go from here? Most likely, these first steps which the Irish government is planning on taking towards changing Ireland’s current laws will lead to more. Once the first concession is made, it will become all the easier to make more concessions. It is a slippery slope which in the end will lead to yet another western country which will legally allow the murder of a human being. Will abortion lead to more domestic violence, fewer workers, and an older population for the Irish people, a trend which has become increasingly problematic in other European countries? Will Ireland will join the rest of the members of the European Union, save Malta, in a slow, cultural suicide as its birth rate drops below that which is necessary to support a population? If abortion were to become legal in Ireland, will the Irish people begin to disappear?

Such a sad picture deserves time for thought and prayer.