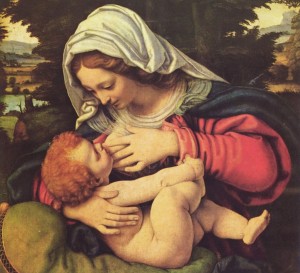 With the 40th anniversary of Roe v. Wade approaching, I’ve been thinking quite a bit about a post I read last month over at the popular atheist blog “Love, Joy, Feminism”.  The article asserted that most pro-life (or anti-abortion) ads portray photos of already-born babies and pre-born fetuses, while failing to depict the mother.  Libby Anne therefore concludes that anti-abortion “fundamentalists” care nothing for women themselves, in spite of the fact that–gasp–these babies would not and could not exist without the women carrying them!

Now when I performed my own image search on Google, it netted the same result.  (Along with a photo of a lady licking a pumpkin–Google images are scary.)  So I grant that Libby Anne is correct in her assertion that women are oftentimes not depicted in anti-abortion literature.

I’ll also grant that her argument is, on the surface anyway, semi-logical: people are only showing photos of babies, and not showing photos of women, and so therefore it must follow that these folks care nothing for women and only for babies.  Rights for the pre-born zygotes, embryos and fetuses!  Enslavement for and the ultimate erasure of women!

But being one of those anti-abortion types the article was complaining about, I would argue that this is a completely false and ridiculous dichotomy.  These ads are not intended to convey the entire, complex issue of abortion and human rights within the confines of a city billboard or Facebook share, but instead to demonstrate the humanity and dignity of a pre-born being.  Women can, after all, speak–and be seen, for that matter–for themselves.  A 10-week-old embryo on the other hand cannot.

Because the horrors of abortion, everything from the procedure itself to the inherent risks and not-uncommon shame, are utterly hidden from the culture’s view.

Abortionists do their work behind closed clinic doors, where they are virtually the only ones seeing the tiny, barely-formed baby struggling to dodge the sharp instruments.

Even the woman herself is unconscious, and therefore not witness to her body being invaded as her child is systematically ripped apart and killed.

So if anyone is rendering a woman voiceless and irrelevant, it is the person on the other end of the curette.

And what Libby Ann fails to see is that we anti-abortion folks actually believe the very opposite: the woman carrying the child in question cannot be erased.  She is a mother, from the time her egg is fertilized, to a person made in the image of God Himself.  And far from being merely an incubator or host, the mother has participated in mankind’s most creative act: the bringing forth of new life.  Whatever her personal circumstances–and I will not pretend that they are always conducive to or ideal for raising a child–she has conceived a human being, a body + soul.  And that is a fact that simply can’t be erased.  It just is.

But so long as women seek salvation and freedom via Planned Parenthood escorts, vacuum aspirators and forceps, they fall prey to the culture’s narrative which says that pregnancy renders women as little more than host to a parasite.

See, it is the culture that fails to acknowledge a woman as anything more than a body with a uterus.

It is the culture that fails to acknowledge that a woman is a person.

Abortion advocates who deny the humanity, dignity and personhood of a fetus are simultaneously (and rather ironically) denying those very things about the woman carrying the fetus.  No one should argue that carrying a pregnancy to term is not a sacrificial act.  Because it is.  But this is part of the mystery of womanhood, a profoundly amazing truth that gives rise to the awe of the human condition.  Because in spite of God’s original design, not all children are conceived in an act of conjugal love, but they are carried and birthed through a constant choosing of the weaker’s good over the stronger.  And it is a testament to women, not a denigration, when they choose something difficult because it is right and honorable.  Even when it costs them.  Maybe especially when it costs them.

So every single image you see of a fetus, whether online or by the side of the highway, represents not only a life, but the creative act of God, in which He allows us humans to participate through our free will and choosing.  The fetuses represented by these images do not exist independently as such.  Those fetuses have parents.

And so it follows too that every single baby discarded in the medical waste bin or stored in a clinic’s refrigerator jar has a mother and a father.  The baby’s body may be distorted beyond recognition, or too tiny to even see, but the soul lives on–as does the motherhood of the woman whose child was killed for profit under the guise of “compassion”.

Becoming pregnant, giving birth, and raising children does not cause me to cease to exist, nor does it diminish my personhood as a woman.  On the contrary, it gives witness to the very love of God, the community of the Holy Trinity, Christ’s Church in all her radiant glory, and the mystery that is husband, wife and family.  And at the same time it is a beautiful paradox.  Because in giving myself away, in saying yes to Jesus by loving my husband and my children, in emptying myself of selfishness through sacrifice, I gain far more than I could possibly imagine.

And far from being a mere duty or obligation, it has the potential to be an incredible source of joy.

It is interesting to note that many (most?) of the readers in “Love, Joy, Feminism”‘s combox used to be pro-life, yet now as humanists cannot comprehend how one maintains that an embryo is a life worth fighting for.  And the atheistic worldview espoused there makes logical sense if life on earth is all there is, if we are all merely a biological accident of the cosmos.  Because if that were the case, there would be no objective morality, period–no standard outside of ourselves–and so one really ought to seek the easiest, most comfortable life possible.  (Why wouldn’t you, when the ultimate worship and autonomy of self takes the place of a God that is “other”?)  And since becoming a mother and raising a child are not always comfortable, convenient or expedient,abortion suddenly becomes a reasonable solution.

The truth is, of course, that women will never, ever be “erased” by motherhood.  That notion is virtually impossible because our womanhood actually finds its fullness in love which, when we have chosen the vocation of marriage, is ultimately (and exquisitely) expressed through the conception of a child.  It is love begetting love.  It is, as Blessed John Paul II so eloquently described, a love which says “I may become a father/I may become a mother.”  Instead of being rooted in the utilitarian motive of mere pleasure-seeking, it is a love saying “yes” to God in the fashion of our Blessed Mother Mary.

And I would suggest that even when a child is not conceived within the Sacrament of Holy Matrimony, even when a soul springs into being amidst any sort of poverty, it is a love which calls for a different (though no less important) sort of self-giving on the part of the mother.  It is a love which acknowledges the child as having an eternal soul regardless the circumstances of his or her conception, and which acknowledges the woman as a mother regardless of her marital or societal status.

Because as women, our dignity and personhood can’t be separated from the fact that we were created as women, with the great and profound potential for motherhood, by a loving, personal and creative God.  We were created through love, for love.  And so we will never, ever be erased.